In the heart of Paris, a wounded Notre-Dame stirs emotions 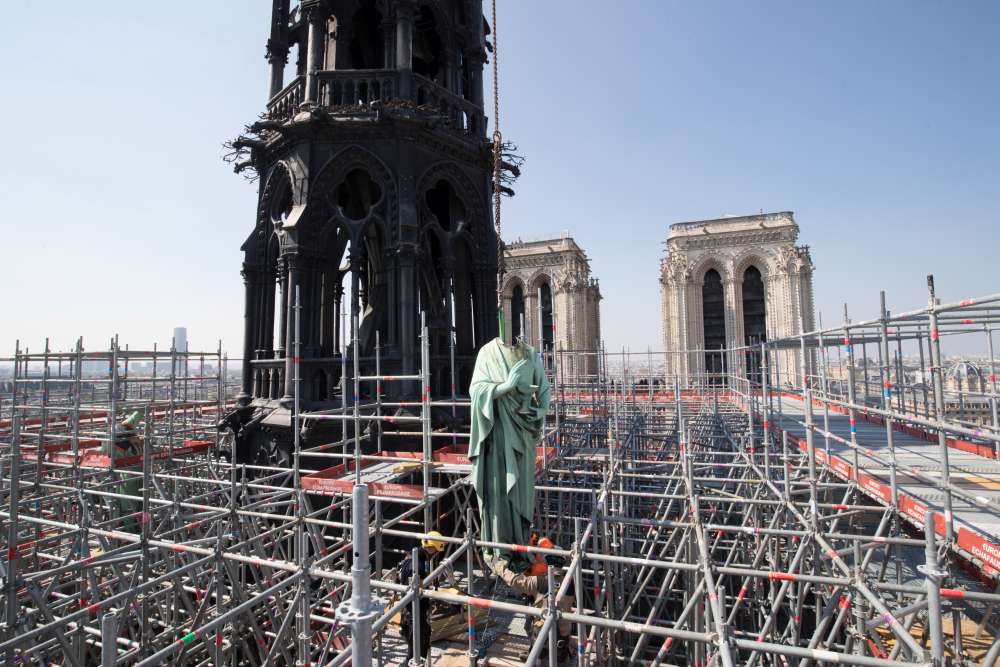 Early morning runners stopped in their tracks, dumb-founded. Across the river, still smouldering, loomed the burnt-out form of Notre-Dame de Paris, its spire collapsed, its bell towers and buttresses standing silent in the dawn light.

“Blessée, mais vivante,” tweeted Henrik Enderlein, the director of the Jacques Delors Institute, alongside pictures of the shattered shell of the Gothic masterpiece that sits at the heart of Paris. “Wounded, but alive.”

After a night during which more than 400 firefighters toiled for 15 hours to quell a blaze that tore through the 12th century cathedral, Parisians and visitors were struggling to absorb the enormity of the disaster.

Days before the commemoration of Easter, a church that has stood as a monument to the Catholic faith and a symbol of France for nearly nine centuries had been eviscerated by an inferno that police believe may have started by accident.

Lech Kurek, a 38-year-old visiting with his wife from Poland, said they had been left shell-shocked.

“I am praying and my wife is singing,” he said. “It is just crazy and surreal… For Christians, it is terrible ahead of Easter.”

President Emmanuel Macron visited the site on the Ile de la Cite, an island in the River Seine, on Monday night and pledged that Notre-Dame would be rebuilt, no matter what it takes.

The rival owners of France’s two biggest luxury and fashion empires, Francois-Henri Pinault of Kering and Bernard Arnault of LVMH, said they were donating 100 million euros and 200 million euros to the restoration respectively. Oil company Total pledged 100 million. The city of Paris said it would provide 50 million.

For Olivier Lebib, an artisan who has lived in Paris for 40 years, it is essential the cathedral is restored to its glory.

“Notre-Dame is our sister, it is so sad, we are all mourning — Parisians, French people, tourists, the Chinese, the whole planet,” he said. “Thank God that the stone structure has withstood the fire.”

The cathedral is one of Paris’s most popular landmarks, welcoming more than 13 million visitors a year, and no doubt features in the photo albums of just about anyone who has taken snapshots in the French capital. Gone, now, is the 91 metre spire that has stood atop it since the mid-1800s.

“It’s an emotional strain for the whole nation,” said Pierre-Herve Grosjean, 41, a priest from Versailles, who noted the cathedral’s role as a national rallying place in 2015 after Islamist gunmen and bombers killed 130 people in a rampage.

“No one is left indifferent. After the terror attacks, everyone gathered at Notre-Dame.”

On Tuesday morning, there were still groups standing vigil on the banks of the Seine looking towards the cathedral, some singing, some in silent prayer in the week that Christians mark the story of the death and resurrection of Jesus.