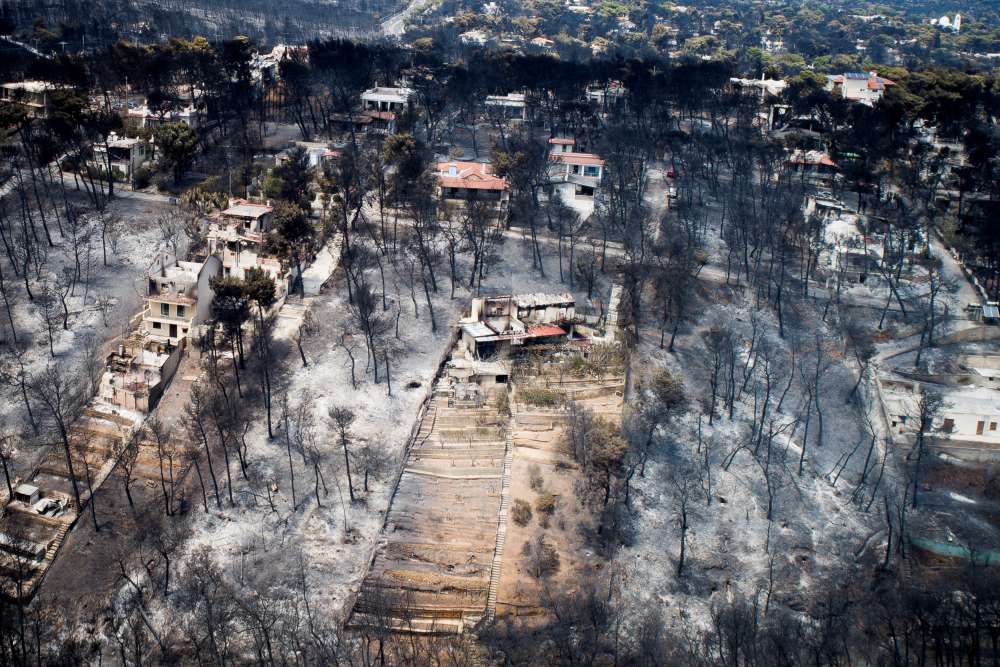 The death toll from a fire which ripped through a Greek coastal town stood at 80 on Wednesday as frantic relatives tried to track down people missing from the inferno and coroners began the grim task of identifying bodies.

Hundreds of people were trapped in the eastern resort of Mati on Monday night as flames whipped around them. Many jumped into the sea to survive but others died from suffocation, either in their cars or trapped on the edge of steep cliffs.

The Greek anti-terrorist service was investigating suggestions that the blaze – one of several throughout the Attica region – was started deliberately, a security source said. Arson is often thought to be behind some fires in a crude attempt to clear forest land for building.

The fire brigade said the death of a survivor in hospital had brought the toll up to 80. The service had also received dozens of calls reporting missing persons, but it was unclear if some of them were among those found dead, a spokesperson said.

Some appeared on television to plead for help.

Her mother was Athina Karakoulaki, 48, whom she last spoke to on Monday afternoon as the flames closed in.

The fire broke out at 16.57, an hour which is observed as a siesta time in rural Greek communities. Mati was popular with local tourists, including pensioners.

Rescue teams combed through the area and the sea on Wednesday trying to locate anything which could offer clarity on the missing, who are thought to number about 40.

“We took our cars and went down to the sea and got into the sea to escape, but there were people who did not make it,” said Mati resident Agni Gantona.

“We got into the water and stayed there for about five hours until the boats came to pick us up. We were at the beach with about 250, 300 people.

With most of the corpses badly charred, identification of the dead will be challenging, experts said.

The post-mortems and identification procedures are taking place at a morgue at Shisto, west of Athens. Leon said this will involve team work by coroners, forensic dentistry experts from the Athens University’s Dental School, and the police forensic service.

It was unclear what caused the fire, which spread rapidly through the community. But some suggested that the sheer force of winds, thick pine, fire and panic was a deadly combination making even the most well-executed evacuation plan futile.

“Armaggeddon,” wrote the daily newspaper Ethnos on its front page, a reference to the Biblical location prophesising the end of times.

It carried a photo of a burned Greek flag hanging among the branches of a charred tree.