Hundreds take to Charlottesville streets a year after far-right rally 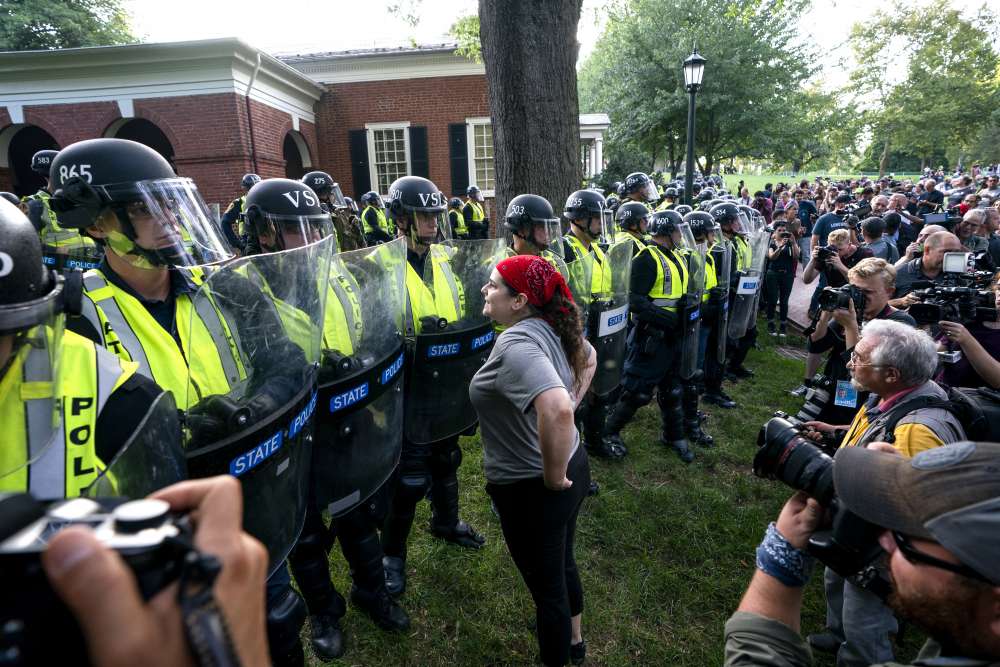 Hundreds of students and left-wing activists took to the streets of Charlottesville, Virginia, on Saturday, as a rally to mark the anniversary of last year’s white nationalist gathering turned largely into an anti-police protest.

With chants like, “Cops and Klan go hand in hand,” the protesters’ criticisms of both police and the University of Virginia underscored the resentment that still exists a year after torch-bearing neo-Nazis marched through campus, shouting anti-Semitic messages and beating counterprotesters.

At one point on Saturday, dozens of officers in riot gear formed a line near where the rally was taking place, prompting many protesters to rush over yelling, “Why are you in riot gear? We don’t see no riot here.”

The standoff ended without any clashes as organizers urged the crowd to move away and begin marching off campus. Police, who appeared to be avoiding a confrontation, rode bicycles ahead of the march to stop traffic.

The newly installed president of the University of Virginia, James Ryan, apologized for the school’s inaction last year while speaking at an event to memorialize the anniversary.

Saturday’s march capped a day of hope, grief, anger and remembrance in Charlottesville, one year after the “Unite the Right” rally brought racially charged street violence to the scenic college town.

The organizer of last year’s rally, local blogger Jason Kessler, has planned a sequel for Sunday in Washington after being denied a permit in Charlottesville.

With hundreds of police maintaining a tight security perimeter around a 15-block downtown area, Charlottesville’s normally bustling business district was relatively quiet on Saturday. The buzz of a police helicopter overhead was a constant throughout the day.

The massive police response was not welcomed by everyone, including some residents and business owners who complained that the restrictions were an overreaction.

The result, however, was a day largely devoid of conflict. Authorities arrested three men for minor offenses, including a 64-year-old disabled man who appeared to deliberately challenge the prohibition on certain items in the secured area.

The man, John Miska, who was wearing a handgun in a shoulder holster, visited a drugstore and purchased razor blades, which qualified as contraband under the city’s emergency declaration. The gun, however, was not banned, based on state law.

When he refused an officer’s request to take the razors to his car, he was arrested for disorderly conduct.

“This is the loss of our constitutional rights here in Charlottesville,” he shouted, as officers led him away in plastic hand ties.

A group of anti-fascist protesters, sometimes known as “Antifa,” marched in the afternoon, carrying signs with messages like “Good Night White Pride.” They stopped to pay their respects at the corner where a local woman, Heather Heyer, was killed when an Ohio man drove his car into a crowd of counterprotesters following last year’s rally.

While some businesses closed for the weekend, many merchants remained open in a show of solidarity.

“It’s my town, and I’m not afraid,” said Karen Walker, whose floral shop Hedge was open on Saturday even though she did not expect much business. Outside her front door, a bucket of freshly cut flowers was available for passersby to take for free.

Many local residents also made a point of coming downtown to mark the anniversary. Kathe Falzer, 67, changed a flight to California so she could spend Saturday in town.

“I felt the need to be here and support the businesses,” Falzer said as she ate lunch at a diner on Main Street.