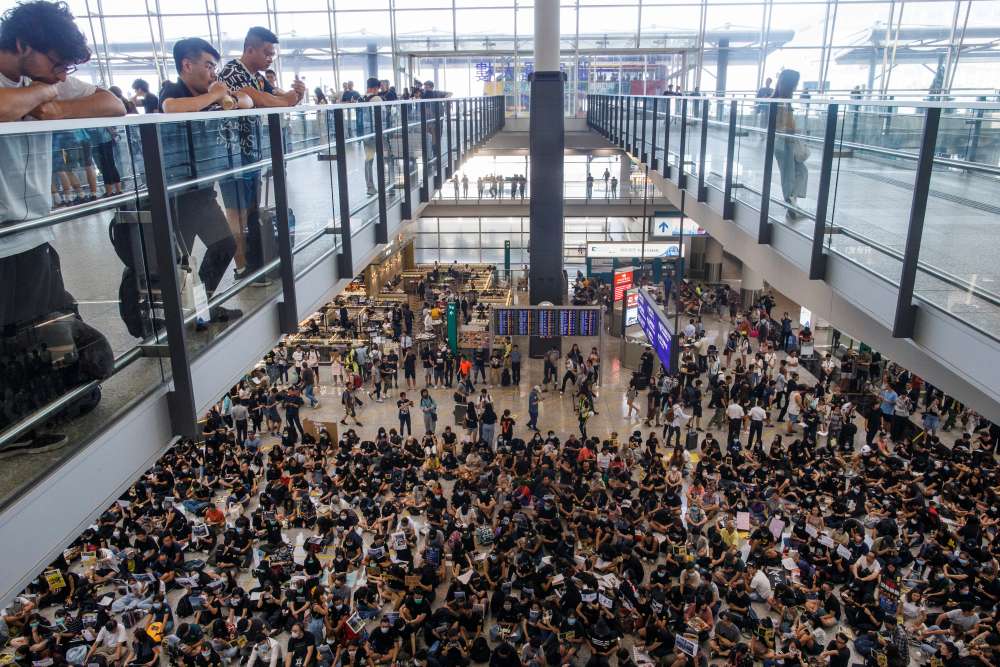 Demonstrators crowded the arrivals hall at Hong Kong airport on Friday, handing out anti-government leaflets and waving banners in a dozen languages in a bid to raise awareness among visitors ahead of weekend rallies planned across the city.

About a thousand protesters, mostly young and wearing black T-shirts, held a sit-in and distributed flyers headlined “Dear travellers” above artwork depicting the protests since June that have plunged the financial hub into its biggest crisis since returning to China from British rule in 1997.

“Please forgive us for the ‘unexpected’ Hong Kong,” the English leaflets read. “You’ve arrived in a broken, torn-apart city, not the one you have once pictured. Yet for this Hong Kong, we fight”.

The increasingly violent protests pose one of the gravest populist challenges yet to Chinese leader Xi Jinping.

What started as an angry response to a now-suspended law that would have allowed criminal suspects to be extradited for trial in Chinese courts has grown to include demands for greater democracy, the resignation of Hong Kong chief executive Carrie Lam, and even keeping out mainland tourists.

The crowd at the airport filled two chambers of the arrivals hall. Protesters sang “Do You Hear the People Sing?” from the musical Les Miserables and chanted: “Democracy now” and “Hong Kongers, add oil!” — a popular exhortation in Cantonese.

The airport demonstration came as the city’s powerful property developers spoke out for the first time, urging calm after a dozen big companies warned in recent days that the unrest had dented earnings.

“The Hong Kong community has been suffering from the acts of violence perpetrated by a small group of individuals lately,” said a statement signed by 17 developers, including Henderson Land Development, New World Development 0017.HK, and Sun Hung Kai Properties.

“Such acts have deviated from the original intent of the peaceful demonstrations and are bringing distress to the business community and the general public as a whole,” it said.

There was no sign of a police presence at the airport by late Friday afternoon.

“It will be a peaceful protest as long as the police do not show up,” one protester, Charlotte Lam, 16, told Reuters.

“We have made stickers, banners in over 16 languages, ranging from Japanese to Spanish. We want to spread our message internationally. We are not rioters, we are a group of Hong Kong people fighting for human rights and freedom,” she said.

Hong Kong has recalled from retirement a police commander who oversaw the response to pro-democracy demonstrations in 2014 to help deal with the latest protests, suggesting a lack of confidence in the current leadership.

Former deputy police commissioner Alan Lau Yip-shing will handle large-scale public order events, including activities to mark the 70th anniversary of the founding of the People’s Republic of China on Oct. 1, the government said in a statement.

The escalating violence has already prompted travel warnings from countries including the United States and Australia, although the airport demonstration did not draw complaints from some travellers.

“I don’t really know what to think about the protest down there,” said a woman from New Zealand who gave her name as Joyce.

“Right now I just hope it won’t delay my flight. But at the same time, as long as you’re making a point without making too much trouble, it’s OK I guess,” she said.

A Taiwanese man named Daloy, 32, welcomed the demonstrators even though his flight was cancelled.

“I think this is more important, because today it’s Hong Kong and tomorrow it will be Taiwan,” he said. “We are also in a dangerous situation.”

The Chinese General Chamber of Commerce said in a statement on Thursday it supported the stance of Zhang Xiaoming, one of the most senior Chinese officials overseeing Hong Kong affairs.

Zhang said during a meeting in the southern Chinese city of Shenzhen this week Hong Kong was facing its worst crisis since it returned to Chinese rule in 1997. He said the central government must intervene if “turmoil” occurs in Hong Kong.