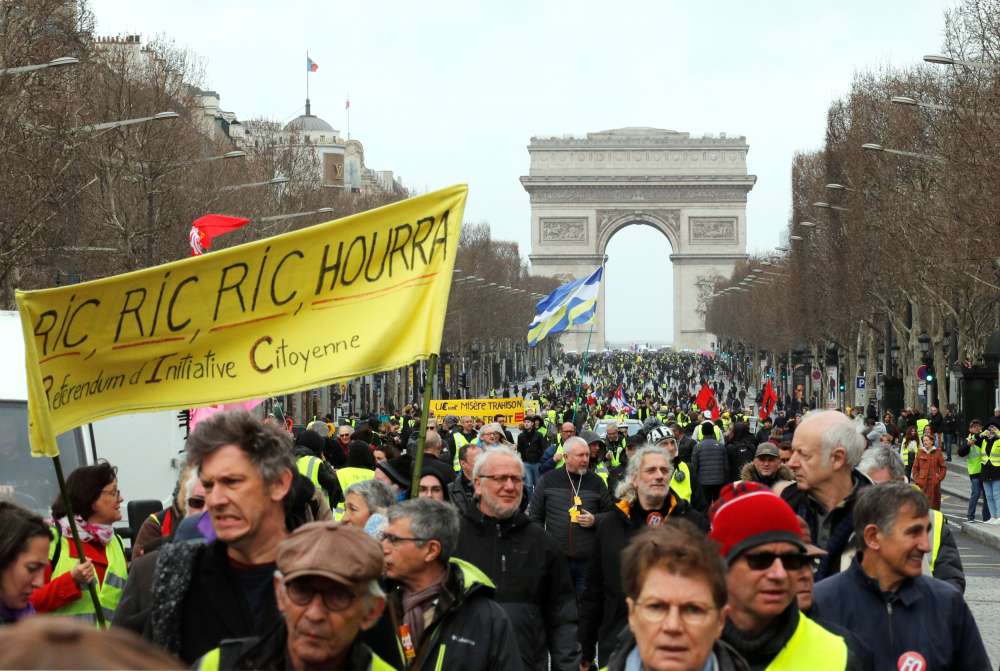 Hundreds of “yellow vest” protesters began marches in Paris on Saturday, marking the 17th straight weekend of anti-government demonstrations despite attempts by French President Emmanuel Macron to quell discontent with a nationwide series of debates.

Protesters wearing the neon high-visibility vests that have come to symbolise the movement were joined by others donning pink tops, as child-care workers turned out against a reform of their unemployment subsidies.

Other gatherings were planned on Saturday in several French cities such as Bordeaux and Toulouse as well as smaller towns such as southerly Puy-en-Velay.

Some demonstrators staged a “flashmob” at Paris’ Charles de Gaulle airport, waving French flags and dancing in one of the terminals, television footage on BFM TV showed.

What started out last November as a backlash against Macron’s plan to hike fuel taxes — part of his bid to push a cleaner energy model — has morphed into a broader movement decrying the government as out of touch with the hardships faced by some households and low-income workers.

Turnout has dwindled since nearly 300,000 people took part in road blockades and marches across France on Nov. 17, coming in at 46,600 last Saturday according to the interior ministry.

But protesters have carried on nonetheless, with few signs of a halt in demonstrations any time soon. The latest turnout figures were not yet available.

Macron, who dropped the fuel tax increase and budgeted an extra 10 billion euros ($11.24 billion) to help the poorest workers, has also sought to defuse the unrest with a series of town hall-like meetings across France.

Consultations with local representatives are due to draw to a close next weekend, coinciding with calls by some ‘yellow vest‘ campaigners to up the pressure on the government throughout March. The movement has no single leader.

After protests descended into riots in December, recent demonstrations been largely peaceful.

Some 54 percent of French people backed or had sympathy with the ‘yellow vests’, an Ifop poll taken on March 7 and 8 for online news site Atlantico showed on Saturday. That was up from 50 percent in mid-February but down from a peak of 72 percent.

Macron’s popularity has also improved in recent weeks. An Ipsos poll released on March 6 showed his ratings improved by 8 percentage points since December of 2018, to a 28 percent approval level.

By In Cyprus
Previous articleBodies of Italian, British climbers found on Pakistan’s “Killer Mountain”
Next article“Neo Plaza” discount village to be built near Nicosia Mall (pictures)