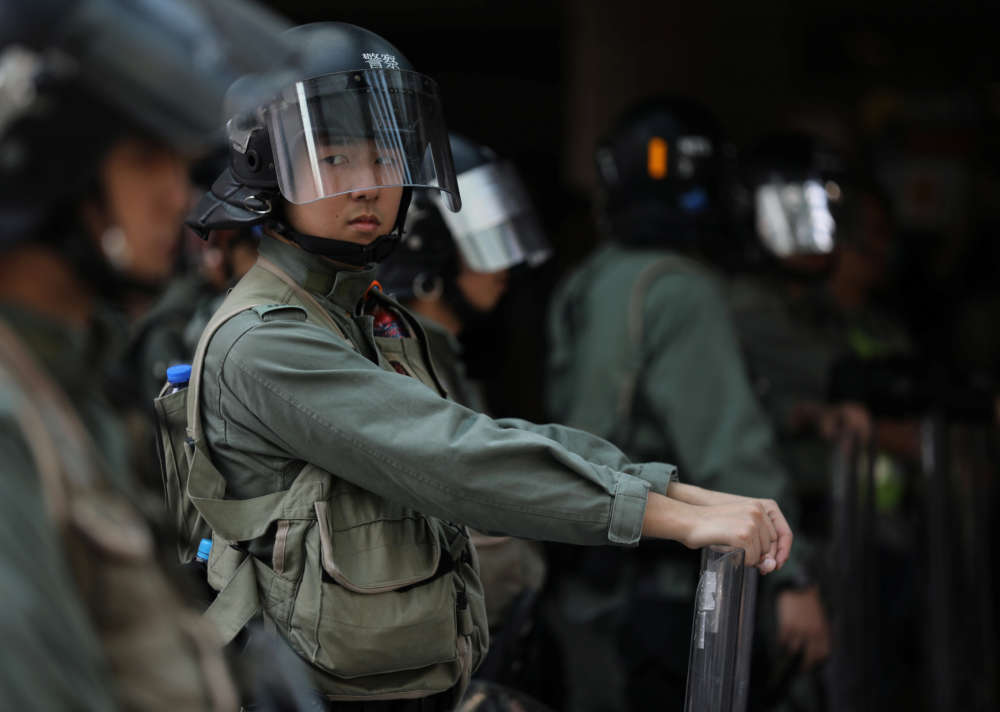 Hong Kong riot police turned out in force on Sunday as thousands of protesters, many wearing now-banned face masks, converged on the Kowloon harbour front to denounce perceived police brutality over months of clashes in the Chinese-ruled city.

Police arrived early, warning protesters to disperse from the tourist district of Tsim Sha Tsui, opposite the British colonial-era Peninsula Hotel, forming cordons and fuelling expectations they were ready to stop the rally before it was in full swing.

The number of protesters was growing by the minute, streaming down the hotel and shopping artery of Nathan Road to the water’s edge, facing the skyline of Hong Kong island opposite.

Police detained some protesters as they gathered, many yelling profanities while police used loudhailers to warn others away.

The rallying cry of the protesters is also for the protection of “Muslims, journalists and the people”.

A police water cannon fired bursts of blue-dyed water at a small group of people outside a mosque during protests in Tsim Sha Tsui last Sunday, drawing criticism from some in the Muslim community.

Billy, 26, a salesman, who did not want to give his full name, said he turned out on Sunday because he was angry at the spraying of the mosque.

“Hong Kong people, regardless of our religion … we come here to say no to our totalitarian government,” he told Reuters, adding he wanted to protest peacefully. “I have a little bit of fear … because our police sometimes they are uncontrollable and they threaten the safety of our people.”

Cindy Chu, 65, a retired nurse, said the police used to be a force for good.

“It’s so simple. They are disturbing the Hong Kong people,” she said. “And what for? What authority do they have to do that? It’s Hong Kong, not China.”

Chu said she was there to support journalists. When asked if she really wanted to give her full name, she said: “I am not afraid. If Hong Kong people are afraid of things like that, then the ending is not good.”

Pro-democracy activists have in recent weeks attacked police with petrol bombs and rocks and slashed one officer in the neck with a knife. Police have responded with tear gas, water cannon, rubber bullets and occasional live rounds, wounding several protesters and a few journalists.

Police deny accusations of brutality, saying they have shown restraint in life-threatening situations. There has been a week-long lull in clashes.

Protesters are angry about what they see as creeping Chinese interference in Hong Kong, a former British colony that returned to Chinese rule in 1997 under a “one country, two systems” formula intended to guarantee freedoms that are not enjoyed on the mainland.

China denies meddling. It has accused foreign governments, including the United States and Britain, of inciting the unrest. (Reuters)