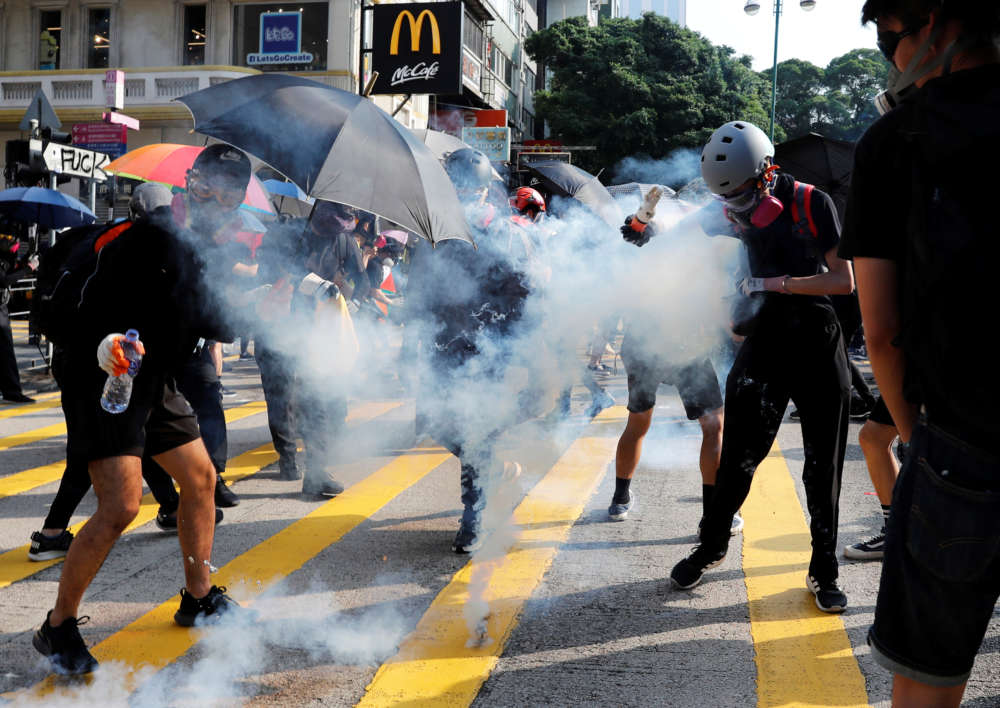 Hong Kong police fired tear gas at protesters throwing petrol bombs on Sunday as thousands staged an illegal march through the Kowloon district that will test the strength of the pro-democracy campaign after four months of unrest.

Police inside the Tsim Sha Tsui police station fired volleys of tear gas and used a loudspeaker to call on protesters in the street below to disperse.

Hardcore black-clad protesters threw petrol bombs at the station’s iron gate and several inside the compound.

Three van loads of riot police then marched down the street.

Hong Kong has been battered by months of often massive and violent protests over concerns that Beijing is tightening its grip on the city, the worst political crisis since Britain handed the city back to China in 1997.

The protests in the Chinese-ruled city also pose the biggest popular challenge to China’s President Xi Jinping since he took power. Beijing has denied eroding Hong Kong’s freedoms and Xi has vowed to crush any attempt to split China.

The unrest was sparked by a bill that would have allowed extradition to mainland China for trial in Communist Party-controlled courts. It has since widened into a pro-democracy movement.

Police had declared Sunday’s march illegal due to concerns over public safety. Protesters, ranging from young students to the elderly, many carrying umbrellas to shield their faces from street surveillance cameras, face arrest.

At the start of the march banners reading “Free Hong Kong” stretched across the ground. Other posters read “HongKongers Resist”, while graffiti on one wall said “Better Dead than Red”.

Hardcore protesters, who have staged running battles with police and torched metro stations, set up road blocks and sprayed graffiti saying: “We chose to die on our feet rather than live on our knees!”.

They have targeted Chinese banks and shops with links to mainland China, leaving mainland Chinese living in Hong Kong worried about their safety.

Hong Kong is governed under a “one country, two systems” formula, which permits the city freedoms not available on the mainland such as an independent judiciary.

Protesters are angry at Hong Kong’s leader Carrie Lam for what they see as her failure to protect those freedoms from an encroaching Beijing, imposing colonial-era emergency powers, and allowing what they say is excessive force by police.

“Carrie Lam is not listening to us at all. This may work in China but not in Hong Kong,” said Cheung, a 33-year-old woman wearing a face mask and black Tshirt, symbols of the democracy movement. Like most protesters, she wanted to be known by only one name.

“You can’t ask a city that already has freedom to walk backward. You can’t do this in an international city,” she said, adding she was not afraid of being arrested.

Hong Kong has been relatively calm in the past two weeks after violent protests fuelled by the introduction of emergency laws, which ban face masks at public rallies.

Protesters have 5 core demands: universal suffrage, an independent inquiry into police action against protesters, amnesty for those charged, and an end to describing protesters as rioters, and the formal withdrawal of the extradition bill.

Lam has said the bill is dead, but it is yet to be formally withdrawn. She has rejected the other demands. On Sunday she said a police complaints inquiry will be completed before the end of the year.

Two people have been shot and wounded by police and thousands injured. Police have arrested more than 2,300 people since June.

The Asian financial hub is facing its first recession in a decade because of the unrest, with retail and tourism badly hurt. On Sunday shops, both luxury and small, were closed along the march route.

The city’s metro, which carries some 5 million people daily, will again shut early.

By In Cyprus
Previous article
Buildings must comply with current legislation to ensure safety, report says
Next article
Helicopters fighting a blaze in Kili