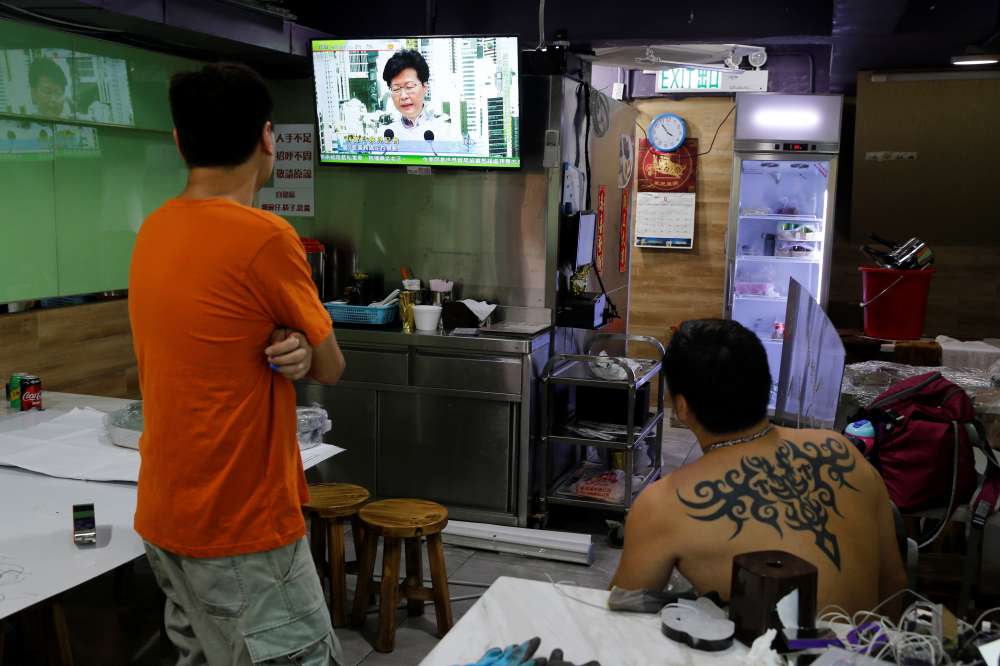 Hong Kong leader Carrie Lam on Saturday delayed indefinitely a proposed law to allow extraditions to mainland China, in a dramatic retreat after widespread anger over the bill sparked violent protests in the Asian finance hub.

The extradition bill, which would cover Hong Kong’s 7 million residents as well as foreign and Chinese nationals in the city, was seen by many as a threat to the rule of law in the former British colony.

Around a million people marched through Hong Kong last Sunday to oppose the bill, according to protest organisers. Protests continued through the week and were met with tear gas, bean bag rounds and rubber bullets from police, plunging the city into turmoil and piling heavy pressure on Lam.

“After repeated internal deliberations over the last two days, I now announce that the government has decided to suspend the legislative amendment exercise, restart our communication with all sectors of society, do more explanation work and listen to different views of society,” Lam told a news conference.

She said there was no deadline, effectively suspending the process indefinitely.

Cracks began to appear on Friday in the support base for the extradition bill with several pro-Beijing politicians and a senior advisor to Lam saying discussion of the bill should be postponed for the time being.

Lam had not appeared in public or commented since Wednesday. She met pro-Beijing lawmakers to explain her pending announcement earlier on Saturday.

Michael Tien, a member of Hong Kong’s legislature and a deputy to China’s national parliament, said a total withdrawal of the bill would not be possible.

Organisers of last Sunday’s protest march are planning another march this Sunday.

In addition to calling for the bill to be completely dropped, they would also be pushing for accountability of the police for the way protests have been handled.

Last Sunday’s march was the biggest political demonstration in Hong Kong since people poured into the streets 30 years ago to protest against the bloody suppression of pro-democracy demonstrations centred around Tiananmen Square on June 4, 1989.

Hong Kong is governed by China under a “one country, two systems” deal that guarantees it special autonomy, including freedom of assembly, free press and independent judiciary.

The Chinese government has denied that it has overreached in Hong Kong.

By In Cyprus
Previous articleCMP to decide next step after Turkey grants access to 30 suspected burial sites in military areas
Next articlePolice investigating theft, assault, abduction of 25 year old woman