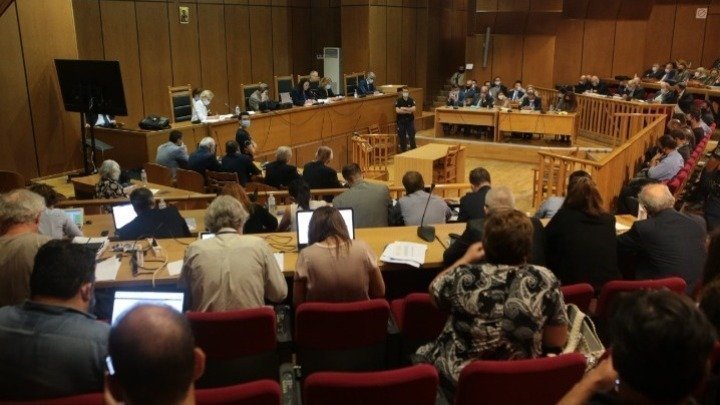 The Athens Court of Appeals on Wednesday delivered a guilty verdict for seven members of far-right Golden Dawn’s leadership, finding that they had run Golden Dawn as a criminal organisation.

The leader of Golden Dawn Nikos Michaloliakos and six former Golden Dawn MPs were found guilty of forming and running a criminal organisation, during the reading of the verdict by the court. They included Christos Pappas, Artemis Matthaiopoulos, Ilias Panagiotaros, Ilias Kasidiaris, Yiannis Lagos and Giorgos Germenis.

The other former MPs on trial, as well as the heads of two local Golden Dawn chapters Giorgos Patelis and Anastasios Pantazis, were found guilty of joining and participating in a criminal organisation.

In a unanimous ruling, Greek justice ruled that Golden Dawn was a criminal organisation “wearing the cloak of a political party,” in accordance with the indictment in the case. The court’s verdict sends multiple messages, accepting both Golden Dawn’s nazi character and the ideological motives of its members.

Earlier, the court had found the defendant Giorgos Roupakias guilty of all charges for the murder of Pavlos Fyssas and another 15 defendants in the case guilty of acting as accomplices, while acquitting two due to reasonable doubt.

The court also delivered a guilty verdict for all defendants accused in connection with the attack on members of the PAME trade union bloc, as well as a guilty verdict of all charged for the attempted murder in the case of the Egyptian fishing boat workers.

In the case of the attack on PAME, the judges converted the initial charges of attempted homicide to dangerous bodily harm for three of the four initial victims, while for the fourth it was converted to inflicting bodily harm and considered statute barred.

The reading of the verdict in the trial of the far-right party Golden Dawn began in the Court of Appeals in Athens at 11:20 on Wednesday, when court president Maria Lepenioti started to read out the names of the accused.

Most of the defendants were absent, with only 11 present in the courtroom and none from among Golden Dawn’s leadership. There were stringent security measures in the courtroom, including the imposition of safe distances to avoid spreading Covid-19.

The process is continuing with the presentation of mitigating circumstances by the defending counsel, such as lack of a previous criminal record or later good behaviour.

The reading out of the verdict caused an uproar, with clapping both within and outside the courtroom, while the mother of Pavlos Fyssas ran out of the auditorium shouting “My son…you did it” amid loud cheers and broke into tears in the arms of her daughter.