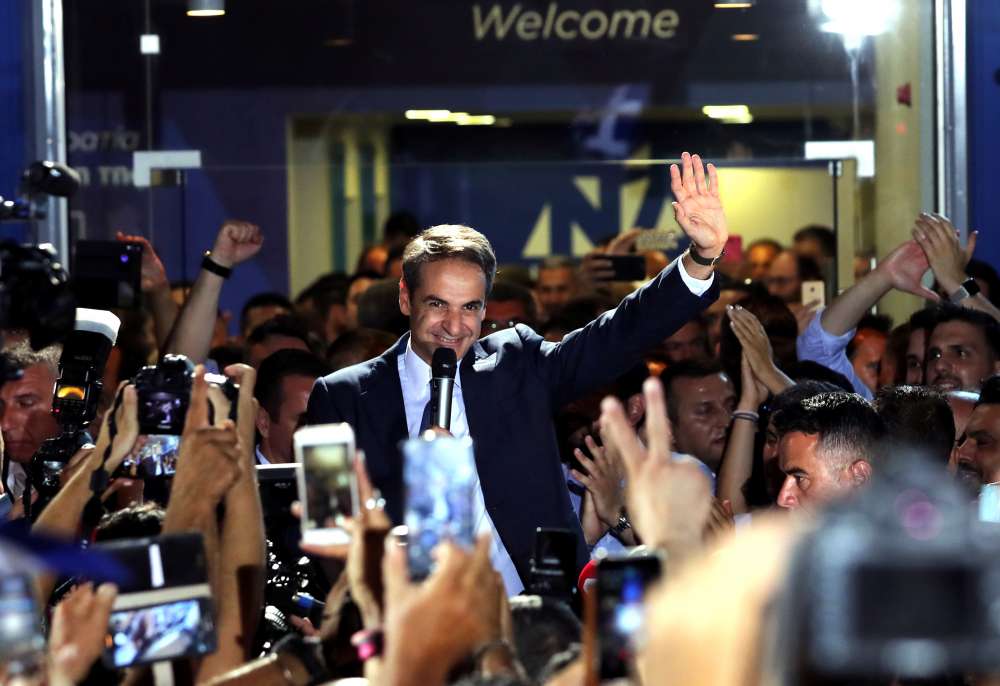 Greece’s opposition conservatives returned to power with a landslide victory in snap elections on Sunday, and Prime Minister elect Kyriakos Mitsotakis said he had a clear mandate for change, pledging more investments and fewer taxes.

Exit polls showed New Democracy winning between 155 and 167 seats in the 300 member parliament, taking advantage of an electoral system which gives bonus seats to the frontrunner.

Mitsotakis said in a televised address that the election outcome gave him a strong and clear mandate to change Greece.

“I am committed to fewer taxes, many investments, for good and new jobs, and growth which will bring better salaries and higher pensions in an efficient state,” Mitsotakis said.

Tsipras said he respected the will of the Greek people.

“Today, with our head held high we accept the people’s verdict. To bring Greece to where it is today we had to take difficult decisions (with) a heavy political cost,” he told journalists.

Tsipras took over from the conservatives in 2015 as Greece was at the peak of a financial crisis which had ravaged the country since 2010. Initially vowing to resist deeper austerity, he was forced into signing up to another bailout months after his election, a decision which went down badly with voters.

The handover will take place on Monday, after Mitsotakis’s swearing in as new Prime Minister.

Sunday’s poll was the first national election since the country shook off close scrutiny by its European partners who loaned Greece billions in three bailouts.

Tsipras signed up to the latest, in 2015, in return for debt relief.

Mitsotakis, 51, assumed the helm of New Democracy in 2016. Although he is regarded as a liberal, his party also harbours members with more right-wing views.

Golden Dawn, an extreme right-wing party detractors accuse of having neo-Nazi sympathies, lost significant ground with early results suggesting it may not reach the 3 percent threshold to parliament.

“The basic reason (for the result) is the economy,” said analyst Theodore Couloumbis. “In the past 4.5 years people saw no improvement, on the contrary there were cutbacks in salaries and pensions,” he said.

The focus now turns to Mitsotakis’s picks for the key economics ministries – finance, energy, development and foreign affairs. He has been tight-lipped on choices during the campaign.

Mitsotakis will inherit an economy that is growing at a moderate clip – at a 1.3% annual pace in the first quarter – and public finances that may fall short of targets agreed with official lenders.

The Bank of Greece projects that the 3.5% of GDP primary surplus target that excludes debt servicing outlays is likely to be missed this year and reach just 2.9% of economic output.

With Greece still challenged by its debt overhang, the fiscal policy stance of the new government will be closely watched.

The real test will be next year’s budget with Mitsotakiss expected to outline the key contours in the traditional economic address in Thessaloniki in September.

“I want the government that will be elected to do its best for the people, who are hungry,” said pensioner Christos Mpekos, 69. “To give jobs to the young so they don’t leave.”

Tsipras says that a vote cast for Mitsotakis would go to the political establishment, which forced Greece to the edge of the precipice in the first place.

But he has also been roundly criticised for mismanagement of crises and for brokering a deeply unpopular deal to end a dispute over the name of neighbouring North Macedonia.

Greece wrapped up its last economic adjustment programme in 2018 but remains under surveillance from lenders to ensure no future fiscal slippage. While economic growth has returned, Greek unemployment of 18 percent is the euro zone’s highest.

New Democracy has promised to invest in creating well-paid jobs with decent benefits. It has also promised to be tough on crime in some neighbourhoods of Athens where there is a strong anti-establishment movement.

In one neighbourhood, activists stormed a polling station and made off with a ballot box.