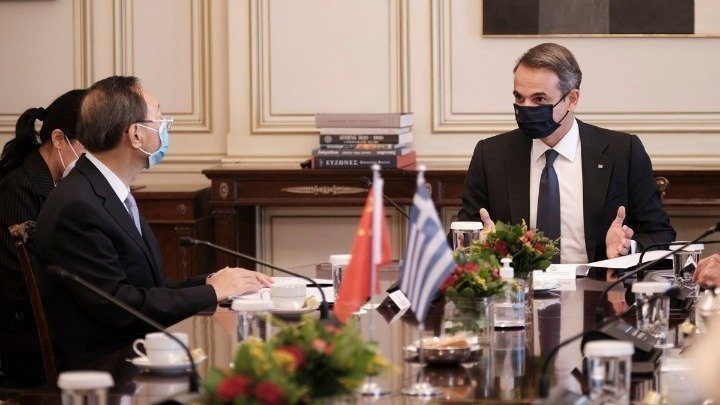 Prime Minister Kyriakos Mitsotakis sent a clear message about the terms of the dialogue with Turkey during a meeting he had earlier on Friday at the Maximos Mansion with Yang Jiechi, a Politburo member and director of the Central Foreign Affairs Commission of the Chinese Communist Party.

“As you know, our country, in addition to Turkey’s aggression, also faces actions that dispute every rule in the United Nations charter. Greece has never hidden that, along with its rights, it always defends good neighbour relations. I consider diplomacy the flip side of my country’s strength”, he said.

The prime minister stressed that out of the many provocative comments made by Turkish President Recep Tayyip Erdogan, he will keep only the one that refers to starting dialogue, adding:

“I respond to it with six clear words: The provocations stop, the talks begin”.

He underlined that Greece can and wants to discuss the delimitation of its maritime zones in the Aegean, in the Eastern Mediterranean, on the basis of international law but without being subjected to blackmail or an assault on reason.

“Let the threats stop, therefore, so that talks can begin”, he said.

He also told the Chinese official that Foreign Minister Nikos Dendias will meet later in the day with the UN Secretary General Antonio Guterres, to whom he will deliver a letter from the prime minister that presents and documents Ankara’s illegal activity.

On his part, Jiechi said “with the joint efforts of the government and the people of Greece, the epidemiological picture of Greece has greatly improved and economic activity is generally normalised”.

“We are committed to strengthening cooperation with the Greek side in our common fight against the epidemic and strongly support the role of the World Health Organisation in this effort. Last year the leaders of our two countries successfully exchanged visits with each other and you also participated in the Shanghai International Fair. The main purpose of my visit is to further implement together the important agreements reached by the leaders of both countries last year and to promote the further intensification of the overall strategic China-Greece partnership”, Jiechi underlined.

He concluded by saying that “as a responsible country, China insists on the path of peaceful development and we believe that all countries of the world must follow this path. Both China and Greece are ancient civilisations. Despite the impact of the epidemic, the exchanges of our two countries in the fields of economy, trade, science, cultural exchanges, are proceeding smoothly and we are exploring the possibilities for further development of these collaborations”.