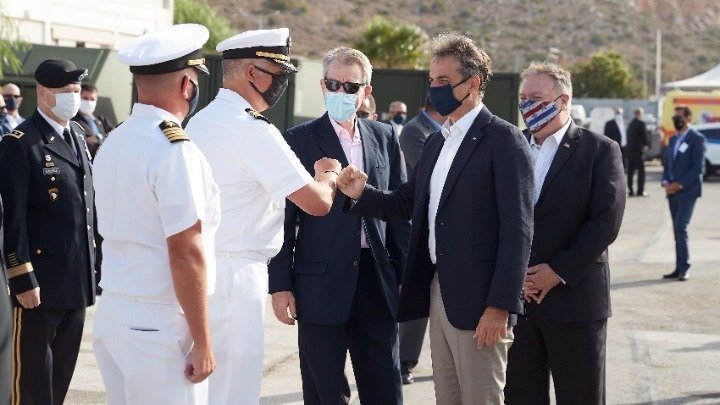 “I corroborate the statement made by [US Secretary of State Mike] Pompeo that relations between our two countries have never been as close and productive as they are today. They are relations that spread over all levels”, Prime Minister Kyriakos Mitsotakis said on Tuesday, in a press conference with Pompeo after their visit to Souda base in Crete.

He also expressed his satisfaction that Pompeo will be a guest in Chania, where the prime minister originates, and noted that on the island of Crete “beats not just the heart of Greece and the heart of the Eastern Mediterranean. There also beats the strong pulse of Greek-US cooperation. It is no accident that we are now speaking from the 115 Battle Wing of our Air Force”.

“Souda is emerging as the most strategic location of the wider region. Here, the interests of our two countries meet, along with those of security and peace”, Mitsotakis added.

“The upgraded agreement for mutual defence cooperation between Greece and the USA extends its action to the area of our joint defence industry, with its spearhead being the modernisation of 84 F-16s but also with joint programmes and very important joint investments in Greek shipyards”, the prime minister noted.

“However, it is expanding to other fields and areas. As in Alexandroupolis, which is emerging as a hub for the transfer of US natural gas to [Europe]…and the privatisation of the port is underway. The same applies to the port of Kavala”, he added.

“An important new bilateral agreement was signed for private-public partnerships in the field of innovation. This is another proof of the leading role that Greece plays in the Balkans, to which it is returning dynamically after an absence of almost 10 years”, Mitsotakis said.

“Our peninsula is a geographical point where many of the common interests of Greece and the USA are gathered. Thessaloniki is and will always be their dynamic base”, he continued.

“In our discussions, security issues in the Eastern Mediterranean remain predominant. A sensitive area which has recently been tested by the aggression of Turkey”, Mitsotakis added.

He explained that “with provocative actions outside of international law, with an unnecessarily extreme rhetoric that charges the atmosphere but also with tacticisms that do not often confirm the sincerity of its intentions; In other words, with actions that are contrary to the values of the western world, which Ankara is, unfortunately, also continuing in the waters of Cyprus, as you have also witnessed during your visit to Nicosia”.

“The Greek response to all the challenges is always the defence of our national rights”, the prime minister noted.

He highlighted that Pompeo understands “that tension between NATO member-states ultimately benefits no one and [he] opposes every unilateral action that a priori torpedoes any dialogue in good faith – and also that international law must remain a steady compass for all”.

“Besides, he is aware of our readiness, both for exploratory contacts that we expect to start soon and for the technical process that is underway at NATO”, Mitsotakis pointed out and stressed that he is “moderately optimistic that it is now the turn of diplomacy”.

The prime minister and Pompeo paid a visit to the military facilities of the Souda Air Base on Tuesday.

They started with a tour of the facilities given by the commanders of the Greek and US bases in Souda, and then visited the naval base at Marathi and pier K14, where they were shown around a Greek frigate docked at the base.

A meeting between the delegations of the two sides was held in the 115th Battle Wing, followed by statements to the press.

At 13:15, Mitsotakis and Pompeo will have a working lunch and at 17:00 they will visit the archaeological site of Aptera, accompanied by Culture Ministery Lina Mendoni.