Greece celebrates the bicentennial of the Greek Revolution of 1821 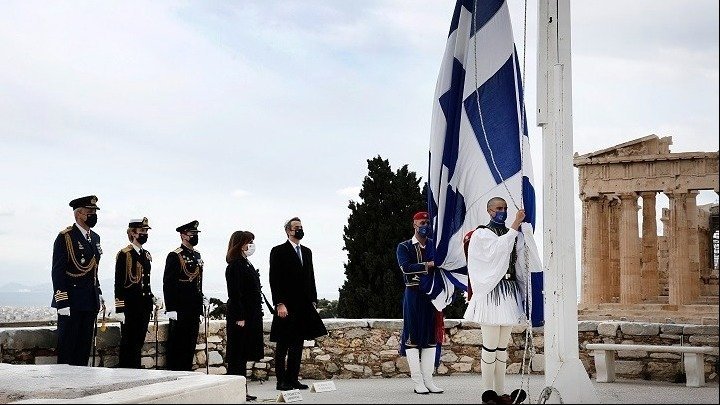 Thursday’s celebrations for the 200th anniversary of the Greek Revolution (1821) opened with a 21-gun salute and the raising of the Greek flag at the Acropolis at 08:00, in the presence of President of the Hellenic Republic Katerina Sakellaropoulou and Prime Minister Kyriakos Mitsotakis.

Internationally acclaimed soprano Anastasia Zanni sang the Greek national anthem, and a celebratory liturgy was expected to follow at the Athens Cathedral, led by Archbishop Hieronymos of Athens and All Greece.

The culmination of the day will be the military parade at Syntagma Square, with visiting dignitaries attending.

The parade will take place on empty streets because of the coronavirus pandemic, and will be broadcast live on television. Prior to the parade, the Greek president and representatives of Britain, France, and Russia, the foreign countries that contributed to the Greek Revolution, along with Cyprus, will lay wreaths at the Tomb of the Unknown Soldier before Parliament.

Following the parade, PM Mitsotakis will meet with Prince Charles at Maximos Mansion at 12:30, prior to the latter’s departure at 14:45.

Foreign Armed Forces will be visiting Greece to commemorate the bicentennial of the Greek Revolution (1821) on Thursday, March 25, as Greek fighter jets and helicopters fly over cities nationally.
The following events are scheduled in and around Athens, in brief:
– The French frigate ‘Languedoc’ will be docked at Piraeus port to Friday; it arrived on Monday.
– The Russian frigate ‘Admiral Fiota Kasatonov’ will be at Piraeus from Tuesday to Friday.
– Ships of the Hellenic Navy will be visiting ports in Greece from Wednesday to Thursday.
– During the parade, fighter jets and helicopters will fly over various sections of Greece, from 10:00 to 11:00.