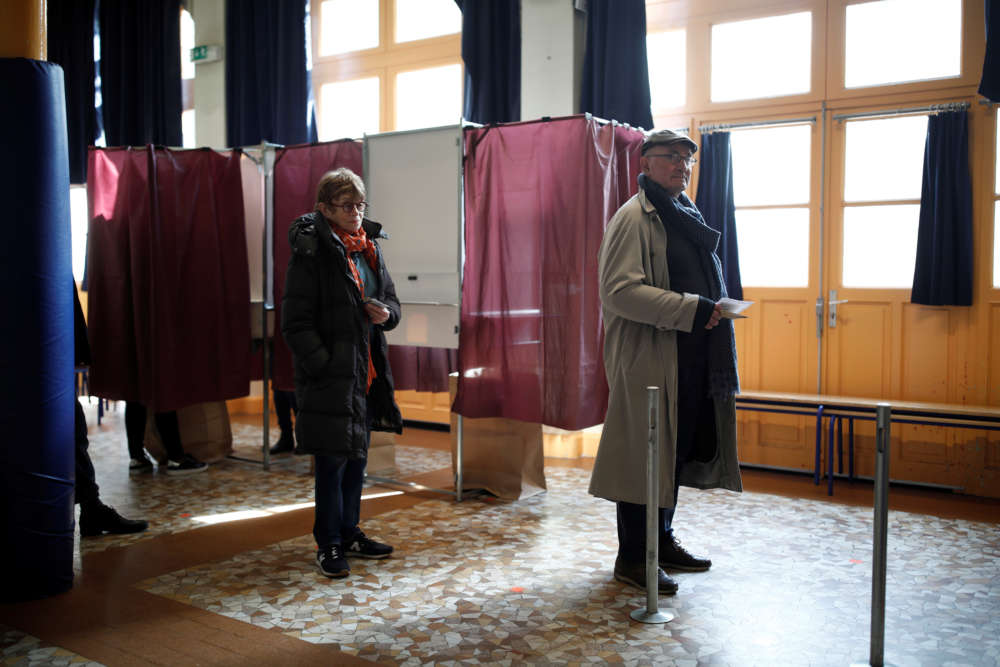 French voters appeared to be holding back from taking part in local elections on Sunday after the government pressed ahead with the vote despite a raft of new measures to curb public gatherings amid a rapid acceleration of the coronavirus.

France is set to choose mayors for 35,000 town halls and almost half a million councillors in a vote overshadowed by the coronavirus outbreak.

By noon (1100 GMT) turnout was at 18% nationally, down from 23% in local elections in 2014, confirming concern among officials that there could be a record abstention.

“It’s really not responsible. It will discredit the message for the seriousness of the situation,” said one voter, Pascale, 59, who gave only her first name and who was wearing a mask and gloves after voting in Paris’ 7th district.

“I’ve got a lot of friends and family that will not go even if they usually carry out their civic duty.”

The government on Saturday ordered the shutdown of most shops, restaurants and entertainment facilities and urged people, especially those over 70, to stay at home after the number of coronavirus cases doubled in 72 hours.

However, Prime Minister Edouard Philippe said that the election would proceed under strict health guidelines.

Authorities said on Saturday that 91 people had died of the virus and more than 4,500 were infected, including 300 who were in intensive care.

In polling stations across the country, people were visibly cautious, trying with difficulty to keep a safe distance from each other.

Poll clerks wore latex gloves, offered disinfectant and marked out lanes with arrows on the floor showing where people should stand while waiting for their turn. Some voters wore gloves and brought their own pens to sign off their vote.

“I am going to vote and keep living my life no matter what. I am not scared of the virus,” said one voter, a 60-year-old woman who asked to be identified only as Martine as she entered a polling station in Paris’ 16th district.

The election comes at a time of growing public scepticism in France about traditional politics. Election officials expect the abstention rate for the election will be high given the coronavirus measures.

Hours before polling stations opened, major opposition politicians including the conservative heads of six regions criticised the government for not calling off the vote.

“Forty-eight hours ago, the same ones did everything they could to stop the vote from being postponed,” MEP Stephane Sejourne, Macron’s former political adviser, said.

Macron decided to go ahead with the elections last week, saying it was vital the democratic system to continue functioning.

Philippe suggested on Saturday the election’s second round on March 22 could be pushed back.

France’s municipal elections traditionally see a higher turnout, with local politicians often viewed in a better light than their national counterparts as they are considered more in touch with what’s going on in people’s everyday lives.

Laurence Koch, 38, who works as a city planning consulting firm, said she was in agreement with the government decision on measures to curb the coronavirus, but could not understand why the election had not been scrapped.

“I find the government position hypocritical. Keeping the local election going is pure nonsense,” she said.

The elections are an important test for Macron after a wave of protests over the last year, first from the “yellow vests” movement and now from opponents of his plans to reform the French pensions system. His party is not expected to do well.

By In Cyprus
Previous article
Coronavirus: Doctors to decide whether Paphos ICU patient to be moved to Famagusta hospital (update)
Next article
Greece bans all links with Albania, North Macedonia, flights with Spain