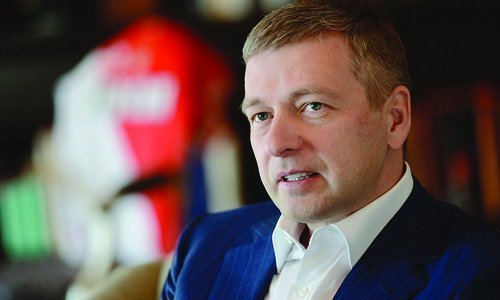 Russian billionaire Dmitry Rybolovlev, locked in a legal battle with Swiss art dealer Yves Bouvier who he claims defrauded him of $1b  ha also sued Sothebies for $380m for allegedly assisting art fraud.

In an article published in Forbes, Kenneth Rapoza notes  that the legal dispute with Bouvier has roped in a quiet and respected middleman, the publicly traded, luxury auctioneer Sotheby’s of New York.

According to the claimant, Bouvier “defrauded” Rybolovlev of more than $1 billion. Often selling him artwork at enormous 70%, markups on paintings he had just purchased.

The dispute over some 38 paintings, of which less than half involved Sotheby’s, has spawned civil and criminal litigation in at least five jurisdictions around the world — Singapore, Switzerland, France, Monaco, and the United States. They claimed to the court that Sotheby’s “materially assisted the largest art fraud in history”.

A New York Southern Circuit Court judge ruled in June against Sotheby’s motion to dismiss evidence and remove the case from New York.

The auction house’s attorneys, Arnold and Porter, wanted to seal the correspondence between a Sotheby’s Vice Chairman for worldwide private sales named Samuel Valette and Bouvier, citing damage to the company’s reputation, the Forbes article continues.

For almost a year Sotheby’s objected to the use of these documents in the Swiss criminal proceedings against Bouvier, with the Russian side arguing that it was because of the tight knit working relationship between the two that reveals Bouvier’s “fraud”. The email correspondence can now be used in Rybolovlev’s legal proceedings with Bouvier in Switzerland and bring this story to an end.

New York court documents showed extracts from the correspondence between Valette and Bouvier, noting that the messages were “designed to induce Rybolovlev to pay inflated, fraudulent prices” and then used Sotheby’s as a “veneer of legitimacy and expertise” by providing “inflated appraisals on demand.”

Some examples that have made the rounds for years: Bouvier bought a painting titled Water Snakes II by Austrian painter Gustav Klimt through Sotheby’s for $126 million and turned around and sold it to Rybolovlev for $183.8 million, according to court filings. Rybolovlev reportedly later read an article in one of the art publications that the Klimt was sold by its previous owner for $120 million and asked Bouvier. After that Valette is said to have sent Bouvier an insurance valuation of the work in a document that was addressed to “Confidential Client” and put the price at $180 million, a $54 million price increase on its own valuation of the work.

During the sale of the sculpture called Tête by Italian artist Amedeo Modigliani, Valette is said to have emailed Bouvier saying that the work was “worth between 70 million to 90 million euros” or “maybe more”. Valette reportedly upgraded his valuation to between 80 million and 100 million euros per Bouvier’s request. Court documents say that later Valette sent Bouvier a contract of sale for this painting for 31.5 million euros, a third of the price stated in the official valuation that was supposed to be sent to Rybolovlev.

The sale of German romanticist Rene Magritte’s Domaine D’Arnheim to Rybolovlev went in a similar way. Sotheby’s provided Bouvier with the valuation for a similar Magritte work at between $40 and $60 million to present to Rybolovlev after selling the painting to Bouvier for $24 million (the contract of sale was signed by Valette). Bouvier then sold it to long-time client Rybolovlev for $43 million.

Sotheby’s omitted the sale to Bouvier from the transaction history of the works of art, which adds to the complexity of the case.

According to people close to Bouvier, all the higher appraisals in emails were done on Rybolovlev’s lawyer’s request anyway. And people affiliated with Sotheby’s who did not want to be quoted on the record due to the ongoing legal dispute, said that revelations by Rybolovlev regarding email exchanges between Valette and Bouvier were simply the type of exchanges between two long time business associates, operating as seller and buyer, trying to close a deal. In the dealings with Bouvier, Sotheby’s played a role that was no different than the role it plays with other buyers of collectibles.

A book about the 2017 Salvator Mundi sale that was published earlier year, titled “The Last Leonardo”, outlines the ins and outs of the deal, including Sotheby’s role in the sale. The book covers Valette’s visit to Rybolovlev’s Manhattan home, where the painting was shown to Russian billionaire, with Bouvier by his side. After that Bouvier bought Salvator Mundi for $80 million through Sotheby’s and in less than 24 hours sold it to Rybolovlev for $127 million.

This summer’s news from New York court came a week after the announcement that Sotheby’s was sold to a French telecom billionaire and avid art collector Patrick Drahi for $3.7 billion. (Forbes estimates Drahi’s net worth at around $9 billion.)

The deal should close in the fourth quarter, at which point Sotheby’s will cease to exist as a publicly traded company. Forbes notes that Valette is a long time advisor to Drahi, so he may continue under new ownership.

Some Sotheby’s shareholders have filed lawsuits to block the deal, a move that could add to the woes of the auction house now stuck in the middle of the art world’s biggest legal battle.

The New York court’s decision is definitely a rare win for a Russian in the U.S.

Daniel Kornstein, a partner in Emery Celli Brinckerhoff & Abady LLP acting for the Rybolovlev companies that were the actual legal buyers of the paintings, said that the June decision brings them closer to the end.

“Of course, they are only preliminary skirmishes in what has already been a long-running legal battle, but they allow our side to move onto the merits and recover the losses,” he said.