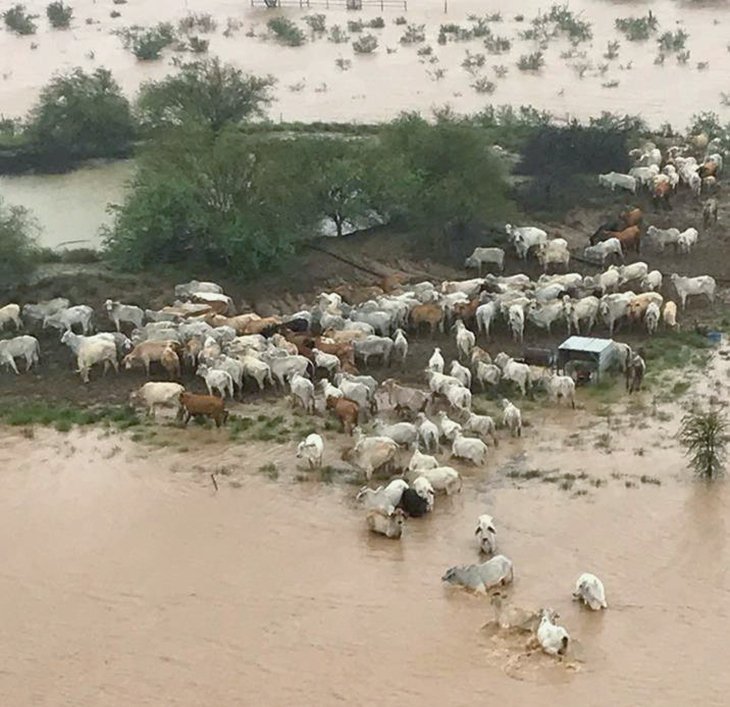 Australian authorities estimate that up to 500,000 cows were killed after a flood that swept through northern Queensland last week.

Torrential rains that lashed the coastal city of Townsville in Queensland state last week have swept inland and flooded grazing land gripped by a severe drought for years.

“We’ve had a year and a half of rainfall in about seven days,” cattle grazier Michael Bulley told Reuters by phone from Bindooran Station west of Julia Creek inQueensland‘s outback.

Bulley said he flew over his three properties by helicopter and saw water stretching for miles in each direction. He estimated up to 60 percent of the cattle he had fed through the drought had been killed by the flooding.

Aerial footage published by the Guardian shows the wreckage of dead cattle at Julia Creek, in mid-north Queensland.

Prime Minister Scott Morrison said the government expected hundreds of thousands of livestock losses and authorities were working on a plan to supply fodder to trapped animals.

“This will be heartbreaking to these communities that have been experiencing years of drought only to see that turn into a torrential inundation,” Morrison told reporters in Sydney.

The weather bureau said a wide arc of outback stretching some 400 km (250 miles) from Mt. Isa, an outback mining town, to Richmond in the east was inundated. The full scale of the disaster would not be known until the clouds cleared.

More than 1,100 people were evacuated this week after authorities opened floodgates at the Ross River Dam when the rains filled reservoirs to overflowing.

A spokesman for global commodities trader Glencore said on Friday there was “short term” production disruption at its Collinsville and Newlands coal operations because of heavy rain.

“Queensland desperately needed rain and now it’s had way too much in some areas,” said Phin Ziebell, agribusiness analyst at National Australia Bank.

“I just don’t think we have enough information at this stage to determine the scale of the stock losses and what benefit that part of the country can get from a bit of pasture,” he added.