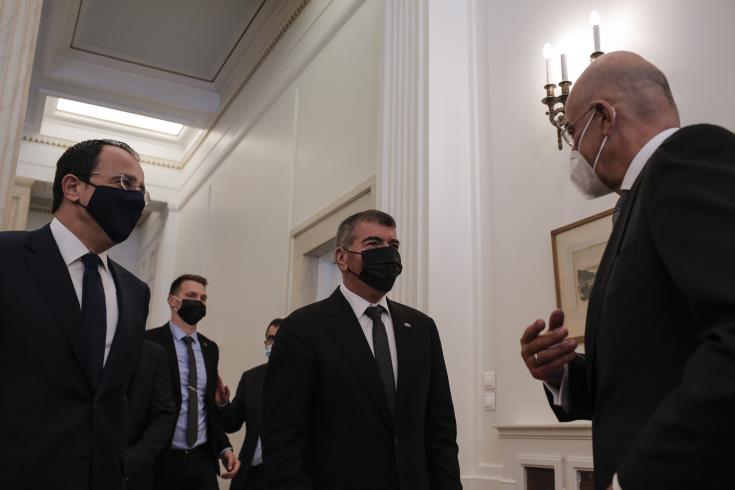 Cyprus’ Foreign Minister Nikos Christodoulides said on Tuesday that Turkey’s illegal actions undermine peace and stability in the region and are not conducive to the efforts of UN Secretary-General, Antonio Guterres, for the resumption of Cyprus settlement talks.

Speaking after the trilateral meeting of the Foreign Ministers of Greece, Cyprus, and Israel, held in Athens, Christodoulides said that he briefed his counterparts on Turkey’s illegal research and drilling activities within Cyprus’ Exclusive Economic Zone, as well as about its actions in Varosha, the fenced off part of Turkish-occupied Famagusta.

“Turkey’s actions undermine stability and security, and they are not conducive to the UN Secretary-General’s efforts for the resumption of negotiations from the point they were left off at Crans Montana, for a reaching a solution on the basis of the framework of the United Nations and the bizonal bicommunal federation”, Christodoulides said.

He also underlined that holding the trilateral meeting, despite the difficult conditions due to the pandemic, proves that Greece, Cyprus, and Israel are strongly committed to enforcing and extending their cooperation, which is based on “mutual respect, a positive approach and on the strategic common understanding as regards the benefits that [this alliance] offers at a regional, European, and international level”.

The Foreign Minister of Cyprus expressed the view that solutions to regional problems can only be found through cooperation and a positive agenda for ensuring security, peace, and stability, with respect to international law, including the Law of the Sea.

“The Greece-Cyprus-Israel trilateral cooperation forms part of a wider effort to promote peace, security, and stability”, Christodoulides said, noting that regional developments were at the center of the trilateral meeting’s agenda. Moreover, Christodoulides congratulated his Israeli counterpart Gabi Ashkenazi for promoting a joint vision for the region, through the normalization of Israel’s relations with Sudan, United Arab Emirates, and Bahrein.

On his part, Greek Foreign Minister Nikos Dendias sent a clear message to Turkey, stressing that the region of the Eastern Mediterranean “will not regress to the 19th century. We will not allow that”.

He underlined that the trilateral meeting is taking place under the weight of Turkey’s new illegal actions, which undermine the prospects of a productive dialogue. In this context, he referred to the recent illegal NAVTEXs issued by Turkey, as well as to the violations of UN Resolutions through the opening of the coastal front in Varosha.

As he said, finding ways to curb Turkish aggressiveness was the main topic discussed at his recent meeting with his Russian counterpart, as well as during today’s trilateral meeting. “Τhe remedy [to this aggressiveness] is multilateral cooperation for the benefit of regional stability and peace”, Dendias noted.

The Greece-Cyprus-Israel strategic alliance “is not directed against any third country. It represents an open invitation to all parties, on the condition of respect for international law”, the Greek Foreign Minister underlined.

Israeli Foreign Minister Gabi Ashkenazi highlighted the importance of the trilateral cooperation for regional security and defense cooperation. As he said, this cooperation exemplifies creative diplomacy for the benefit of peace and prosperity.

“I strongly believe in cooperative diplomacy, and specifically in this trilateral [cooperation]. I believe that this is the way to further deepen our cooperation in the region at many levels, based on international law and on mutual respect between our countries”, Ashkenazi concluded.