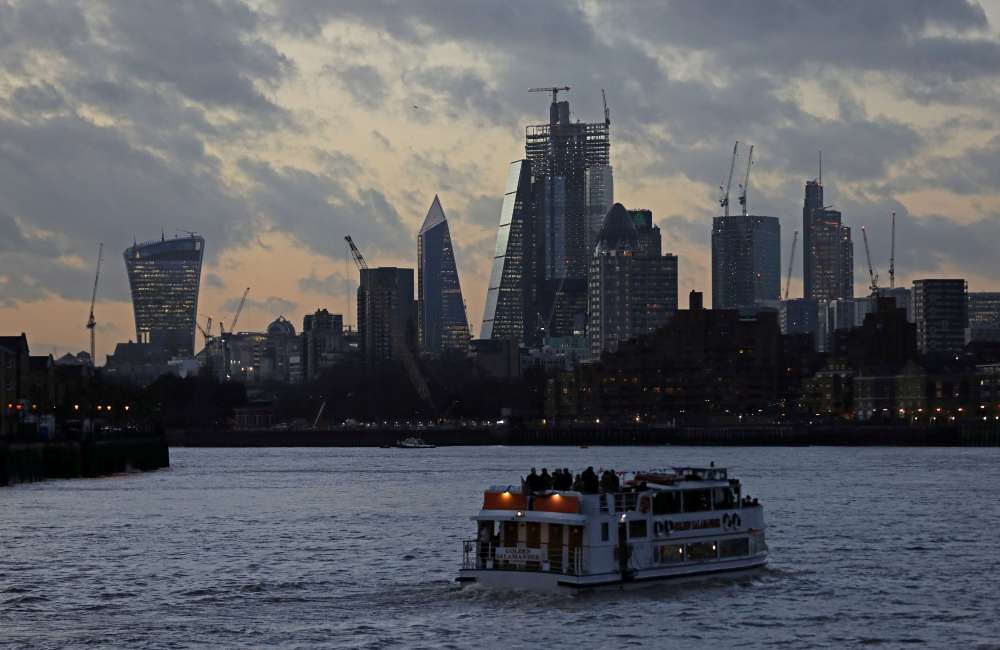 The revision of the Outlook on the UK’s IDRs reflects the following key rating drivers and their relative weights:

Tax Cuts, Higher Budget Deficits: The large and unfunded fiscal package announced as part of the new government’s growth plan could lead to a significant increase in fiscal deficits over the medium term. In addition to the Energy Price Scheme (cap) for households and businesses (GBP60 billion or 2.4% of 2022 GDP over six months), the fiscal package proposed the reversal of revenue measures that underpinned the previous government’s fiscal consolidation strategy and permanent tax cuts. According to government estimates, tax policy changes will reduce revenue by GBP27.7 billion in FY23-24 and GBP31.3 billion in FY24-25.

Without compensatory measures, the general government deficit will remain elevated at 7.8% of GDP in 2022 and increase to 8.8% in 2023, due to the impact of high inflation on index-linked government debt, previously announced household support (1.5% of GDP in FY22-23), the energy price cap and tax cuts, before easing to 7.2% in 2024. This compares with deficits projected to average 2% for the ‘AA’ median. Spending pressures remain strong due to high inflation in the near term, for example, through the indexation of benefits and pensions, and also due to structural factors in areas such as education, social care or healthcare.

High Government Debt: The change in fiscal trajectory will push general government debt to 109% of GDP by 2024 from an estimated 101% in 2022, reflecting both higher primary deficits and a weaker growth outlook. This level would be more than double the forecast ‘AA’ median of 49%. Government bond yields have increased significantly in recent months, reflecting higher interest rates and uncertainty regarding the fiscal strategy. Although the long average maturity of government debt (14.8 years in 2Q22 for gilts and T-Bills, nominal values) mitigates the immediate impact of higher financing costs, higher payments on index-linked gilts (25% of government debt), higher debt and increased borrowing will keep interest payments high (9.8% of general government revenues) relative to peers (2.3%) in 2024.

Increased Policy Uncertainty: The large fiscal stimulus, announced without compensatory measures or an independent evaluation of the macroeconomic and public finances’ impact, and the inconsistency between fiscal and monetary policy stance given strong inflationary pressures, have in Fitch’s view, negatively impacted financial markets’ confidence and the credibility of the policy framework, a key long-standing rating strength.

We consider that statements by the Chancellor hinting at the possibility of additional tax cuts and the likely modification of fiscal rules legislated in January reduce the predictability of fiscal policy. Although the government reversed the elimination of the 45p top rate tax (expected to cost GBP2 billion in FY22-2023), the reportedly negative impact of the tax package, and related financial market volatility, on public opinion and the government’s weakened political capital could further undermine the credibility of and support for the government’s fiscal strategy.

Risk of Prolonged Inflationary Pressures: We forecast average inflation to increase to 8.9% in 2022 before gradually declining to 4% in 2024. Our end-2024 inflation forecast of 3.5%, is still well above the Bank of England’s (BoE) 2% target. Although the energy price cap will lead to a lower inflation peak, rising core inflation (6.3% in August) reflects strong pressures from domestic demand and a tight labour market. A weaker GBP could also feed price dynamics through higher import prices. We consider that these factors and the fiscal stimulus announced will lead the BoE to increase its policy rate to 5% in 2023 and maintain rates at 4% by end-2024.

The BoE has started temporary purchases for up to GBP65 billion of long-term sovereign bonds and delayed the planned sale of its gilt portfolio to alleviate volatility in the gilt market that was brought on by the government’s fiscal package. We view the intervention as within the BoE’s mandate of preserving financial stability.

Weaker Growth Prospects: We forecast the economy to contract in 2023 despite the energy tariff support and the proposed tax cuts. In addition to the energy crisis and weaker external demand (including contraction in the eurozone), the likely tighter domestic financing conditions will lead to a contraction of 1.0% in 2023 before growth recovers to 1.8% in 2024. Although the government seeks to lift growth to 2.5% over the medium term, it has yet to fully outline how and in what timeframe it plans to directly address structural challenges related to low investment, labour supply and continued uncertainty over the implementation and evolution of the Trade Cooperation Agreement (TCA) with the EU.

Strong Financing Flexibility, High Current Account Deficit: The UK’s deep capital markets, absence of foreign-currency debt and the sterling’s reserve currency status underpin the sovereign’s strong financing flexibility. The UK current account more than tripled in 1H22 relative to 1H21 and we forecast it could reach 6.8% of GDP in 2022 (in US dollar terms), up from 2.6% in 2021, and remain elevated, not only reflecting the impact of higher energy prices, but also the expected fiscal stimulus for domestic demand. This increases the UK’s vulnerability to shocks. The UK’s gross and net external debt ratios are higher than ‘AA’ peers.

Political Uncertainty: The new government of Prime Minister Liz Truss has sought to assuage concerns regarding transparency and institutional independence after comments about potential revisions to the BoE’s mandate during the Conservative leadership contest and the roll-out of a large fiscal package without the involvement of the Office of Budget Responsibility. Reduced popular support for the ruling Conservative Party, the social impact of the cost of living crisis and increased frequency of strikes could constrain the new Prime Minister’s room for manoeuvre. Discussions between the UK and EU regarding changes to the Northern Ireland protocol, the section of the Withdrawal Agreement designed to avoid a hard border on the island of Ireland, remain unresolved.

ESG – Governance: The UK has an ESG Relevance Score (RS) of ‘5[+]’ for both Political Stability and Rights and for the Rule of Law, Institutional and Regulatory Quality and Control of Corruption. Theses scores reflect the high weight that the World Bank Governance Indicators (WBGI) have in our proprietary Sovereign Rating Model. The UK has a high WBGI ranking at 86, reflecting its long track record of stable and peaceful political transitions, well established rights for participation in the political process, strong institutional capacity, effective rule of law and a low level of corruption.

Factors that could, individually or collectively, lead to negative rating action/downgrade:

-Public Finances: Failure to implement a credible fiscal strategy that restores market confidence and is consistent with government debt/GDP declining over the medium term.

-Macro: Evidence that policy uncertainty and/or new trading arrangements with the EU will undermine the UK’s macroeconomic performance and financial stability over time.

-Structural: Political developments that lead to deterioration in governance indicators and/or undermine the territorial integrity of the UK.

Factors that could, individually or collectively, lead to positive rating action/upgrade:

– Public Finances: Implementation of a credible fiscal strategy that is consistent with government debt / GDP declining over the medium term.

-Macro: Reduces risks to macro-financial stability, for example, through sustained easing of inflationary pressures and improved market confidence in the government’s fiscal strategy.

Fitch’s proprietary SRM assigns the United Kingdom a score equivalent to a rating of ‘A+’ on the Long-Term Foreign-Currency (LT FC) IDR scale.

Fitch’s sovereign rating committee adjusted the output from the SRM score to arrive at the final LT FC IDR by applying its QO, relative to SRM data and output, as follows:

– Macro: +1 notch, to offset the deterioration in the SRM output driven by volatility from the pandemic shock, including on GDP growth. The deterioration of the GDP growth and GDP volatility variables reflects a very substantial and unprecedented exogenous shock that has hit the vast majority of sovereigns, and Fitch believes that the UK has the capacity to absorb it without lasting effects on its long-term macroeconomic stability.

Fitch’s SRM is the agency’s proprietary multiple regression rating model that employs 18 variables based on three-year centred averages, including one year of forecasts, to produce a score equivalent to a LT FC IDR. Fitch’s QO is a forward-looking qualitative framework designed to allow for adjustment to the SRM output to assign the final rating, reflecting factors within our criteria that are not fully quantifiable and/or not fully reflected in the SRM.

The principal sources of information used in the analysis are described in the Applicable Criteria.

The UK has an ESG Relevance Score of ‘5[+]’ for Political Stability and Rights as World Bank Governance Indicators have the highest weight in Fitch’s SRM and are therefore highly relevant to the rating and a key rating driver with a high weight. As the UK has a percentile rank above 50 for the respective Governance Indicator, this has a positive impact on the credit profile.

The UK has an ESG Relevance Score of ‘5[+]’ for Rule of Law, Institutional & Regulatory Quality and Control of Corruption as World Bank Governance Indicators have the highest weight in Fitch’s SRM and are therefore highly relevant to the rating and are a key rating driver with a high weight. As the UK has a percentile rank above 50 for the respective Governance Indicators, this has a positive impact on the credit profile.

The UK has an ESG Relevance Score of ‘4[+]’for Human Rights and Political Freedoms as the Voice and Accountability pillar of the World Bank Governance Indicators is relevant to the rating and a rating driver. As the UK has a percentile rank above 50 for the respective Governance Indicator, this has a positive impact on the credit profile.

The UK has an ESG Relevance Score of ‘4[+]’ for Creditor Rights as willingness to service and repay debt is relevant to the rating and is a rating driver for the United Kingdom, as for all sovereigns. As the UK has a track record of 20+ years without a restructuring of public debt and captured in our SRM variable, this has a positive impact on the credit profile.

Except for the matters discussed above, the highest level of ESG credit relevance, if present, is a score of ‘3’. This means ESG issues are credit-neutral or have only a minimal credit impact on the entity, either due to their nature or to the way in which they are being managed by the entity. For more information on Fitch’s ESG Relevance Scores, visit www.fitchratings.com/esg.