Fire NW of Athens has already burned 2000 hectares of land 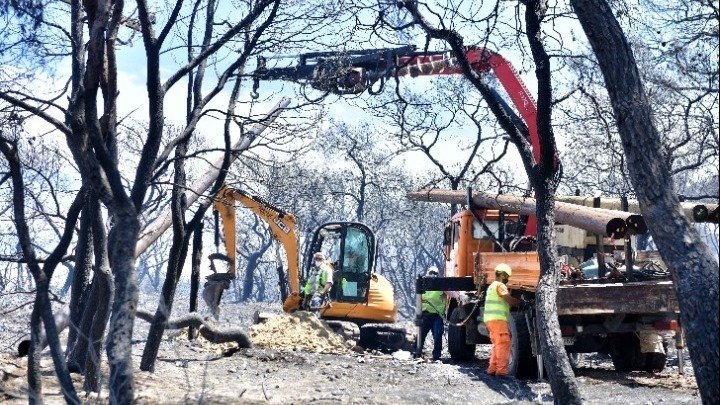 Nearly 2,000 hectares (20,000 stremmas) of pristine forestland has been destroyed by the fire that started on Schinos in the Loutraki area around 21:45 on Wednesday night, Deputy Civil Protection Minister for Crisis Management Nikos Hardalias said during a live emergency briefing on Thursday afternoon.

The pine forest fire, he said, began during cleaning work in an olive grove by the Gerania mountain range and has spread through the dense forest, with the help of strong winds registering 7 and 8 on the Beaufort scale. The forestland had not been maintained for years, the minister said.

The minister said forces from mainland Greece had converged to the area east of Corinth as of midnight. Several villages in the spread-out area of Alepochori have been preventatively evacuated, and “a battle is waged under difficult circumstances,” Hardalias said.

Battling the blaze since about 06:10 on Thursday are 265 firefighters, 10 army units on foot, and volunteer firefighters, with regional water trucks. By air, efforts are assisted by 8 Canadair and 9 PZL aircraft, along with 2 Chinook, 1 Super Puma and 1 BK helicopters, and a police helicopter helping with the coordination. The overall coordination is carried out from the Fire Brigade’s mobile crisis center, which has arrived in the area.

“It will be a difficult night,” Hardalias said, and called on all areas between the Gerania mountains and Megara to be on alert through the night.

Special arson investigators are on the scene since Wednesday night, while the EU’s Copernicus satellite service has been activated.

Earlier inthe day, the Ministry of Health issued directives for residents of the Attica basin, where the smoke has reached, to keep children and older people indoors, especially those with chronic heart and pulmonary conditions.