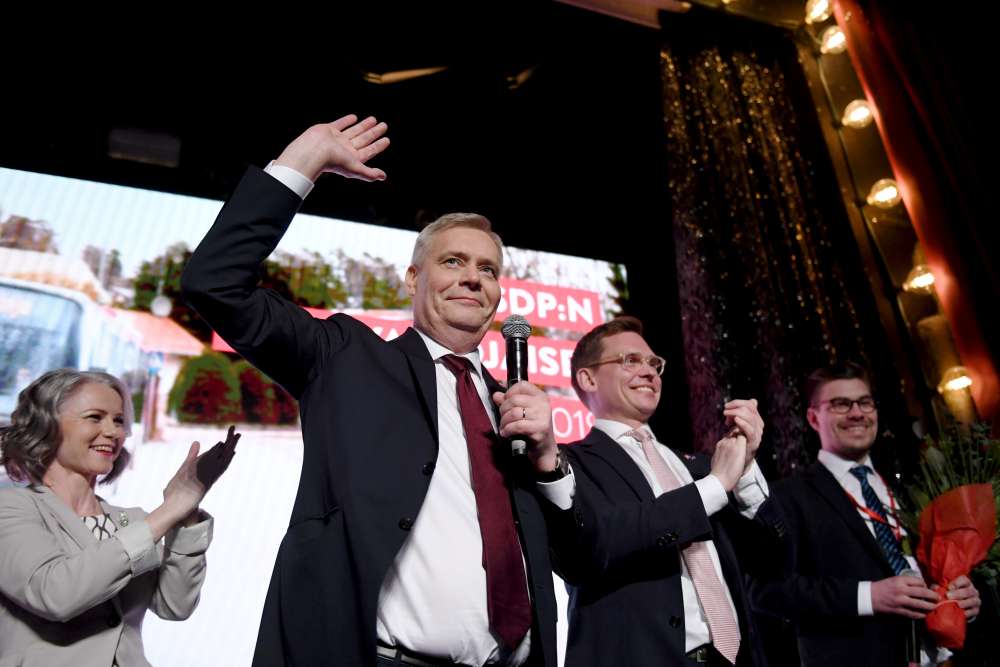 Tipped to win, the opposition Social Democrats scored 17.7 percent, while their eurosceptic Finns Party rivals were at 17.5 percent, according to final results from the justice ministry.

The co-ruling Centre Party of Prime Minister Juha Sipila and centre-right National Coalition stood at 13.8 percent and 17.0 percent, respectively, marking the first time in a century that no party won more than 20 percent in a general election.

With a fragmented parliament and deep divisions within the mainstream parties over how to tackle rising costs of expensive public services, coalition talks following the election could be protracted.

But Social Democrat leader Antti Rinne, 56, a former union boss, was expected to have the first shot at forming a government, with most party leaders having ruled out cooperation with the populist Finns.

“For the first time since 1999 we are the largest party in Finland … SDP is the prime minister’s party,” Rinne told supporters and party members celebrating in central Helsinki.

With the European Parliament election less than two months away, the Finnish ballot is being watched in Brussels.

Underscoring a growing confidence among the far-right in Europe, anti-immigration parties, including the Finns, have announced plans to join forces after the May 26 EU election in a move that could give them a major say in how the continent is run.

At stake in Finland is the future shape of the country’s welfare system, a pillar of the social model across the Nordics, which the leftists want to preserve through tax hikes and the centre-right wants to see streamlined because of rising costs.

After losing some ground when hardliner Jussi Halla-aho took the party’s reigns in 2017, the Finns have made rapid gains in recent months when a number of cases of sexual abuse of minors by foreign men stirred anti-immigration sentiments.

But Halla-aho, who was fined by the Supreme Court in 2012 for blog comments linking Islam to paedophilia and Somalis to theft, emerged as Finland‘s most popular politician on Sunday, garnering the highest number of votes – more than 30,000.

“I could not expect a result like this, and no one could,” Halla-aho told supporters on Sunday, referring to the party’s overall result.

The Finns Party’s stance on environmental policies, which includes opposing a proposed tax on meat consumption, appeals to rural voters in particular who worry about soaring fuel costs and resent any efforts to change what they see as the traditional Finnish way of life.

The party is the only group in Finland – a country that has the highest air quality in the world, according to the World Health Organisation – to argue the next government should not speed up cutting carbon emissions to combat climate change.

Unlike Finland‘s Social Democrats as well as populists in the south of Europe who resonate with voters angry over slow economic growth in the aftermath of the 2008 global financial crisis, the Finns call for fiscal restraint.

One area that has suffered most in the Nordics is the region’s cherished welfare model.

Healthcare systems across much of the developed world have come under increasing stress in recent years as treatment costs soar and people live longer, meaning fewer workers are supporting more pensioners.

Reform has been controversial in Finland and plans to cut costs and boost efficiency have stalled for years, leaving older voters worried about the future.

“It’s good that we are the biggest party in Finland, but it’s tough competition with other parties. Negotiations for a new government will be very tough and very difficult,” Social Democrat supporter Mikko Heinikoski, 37, said.

By In Cyprus
Previous articleMet office: Scattered showers over next few days
Next articleIraq to join cooperation schemes which Cyprus and Greece establish with countries of the region