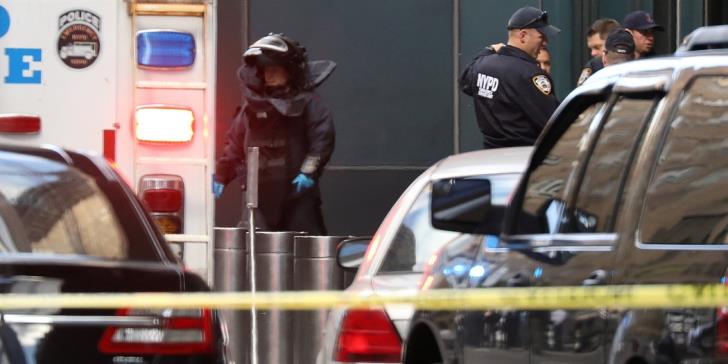 Federal authorities arrested a man in Florida on Friday suspected of sending at least a dozen parcel bombs to high-profile critics of U.S. President Donald Trump days ahead of congressional elections, officials said.

The man was taken into custody in the parking lot of an AutoZone store in Plantation, near Fort Lauderdale, where two witnesses told Reuters they heard a loud blast at the time of the arrest.

Local television stations showed investigators using a large blue tarp to cover a white van that was plastered with decals and stickers, before removing it on a truck.

A federal law enforcement official named the suspect as Cesar Sayoc, born in 1962, and said more arrests could follow.

No one had claimed responsibility for parcel bombs, which were denounced by authorities as terrorism, and came less than two weeks ahead of U.S. congressional elections that could alter the balance of power in Washington.

A federal law enforcement official said earlier on Friday that the focus had intensified on Florida as a key location for the investigation and possible point of origin of the packages.

A man named Dre, a manager at a used car dealership next door to the AutoZone, said he heard a loud noise that sounded like an explosion shortly after 11 a.m.

“I heard like a bomb,” Dre, who declined to give his full name, said in a telephone interview. “I opened the door and saw the FBI there.”

Dre said they were told by FBI agents to stay inside as the area was on lockdown.

A woman who lives nearby and declined to give her name said she was in her yard weeding on Friday morning when she heard a loud bang, saw smoke and heard a lot of shouting.