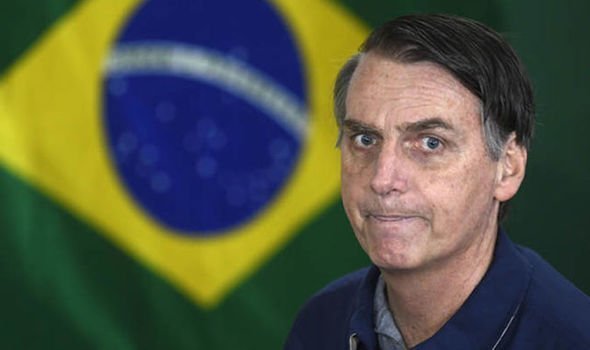 Far-right lawmaker Jair Bolsonaro won Brazil’s presidential election on Sunday, promising to clean up politics, shrink the state and crack down on crime, in a dramatic swing away from the left in the world’s fourth-largest democracy.

The former army captain has alarmed many with vows to sweep political opponents off the map and comments denigrating women, gays and racial minorities.

He will be the first president with a background in the armed forces since the end of Brazil’s 1964-1985 military dictatorship, which he has publicly praised. He has tapped retired generals to serve as his vice president and run key ministries.

In his first public comments after his landslide victory, he pledged to respect democratic principles, but said he wanted to change the country’s direction.

“We cannot continue flirting with socialism, communism, populism and leftist extremism … We are going to change the destiny of Brazil,” Bolsonaro said in an acceptance address, promising to root out graft and stem a tide of violent crime.

An outspoken admirer of U.S. President Donald Trump, Bolsonaro also pledged to realign Brazil with more advanced economies rather than regional allies, overhauling diplomatic priorities after nearly a decade and a half of leftist rule.

Trump called Bolsonaro to wish him good luck soon after his electoral victory, auguring closer political ties between the two largest nations in the Americas — both now led by conservative populists promising to overturn the political establishment.

Bolsonaro won 55.2 percent of votes in the run-off election against left-wing hopeful Fernando Haddad of the Workers Party (PT)’s 44.8 percent, according to electoral authority TSE.

The 63-year-old congressman’s rise has been propelled by rejection of the leftist PT that ran Brazil for 13 of the last 15 years. The party was ousted from power in 2016 in the midst of a deep recession and political graft scandal.

Thousands of Bolsonaro supporters cheered and set off fireworks outside his home in Rio de Janeiro’s luxurious beachfront Barra de Tijuca neighbourhood as his victory was announced. In Brazil’s commercial capital of Sao Paulo, Bolsonaro’s win was greeted with fireworks and the honking of car horns.

Investors have also cheered Bolsonaro’s ascent, relieved that he could keep the PT out of power and hopeful that he would carry out fiscal reforms proposed by his orthodox economic guru.

“I don’t idolize Bolsonaro and I don’t know if he will govern well, but we are hopeful. People want the PT out, they can’t take any more corruption,” said Tatiana Cunha, a 39-year-old systems analyst in the midst of the noisy celebrations in Rio.