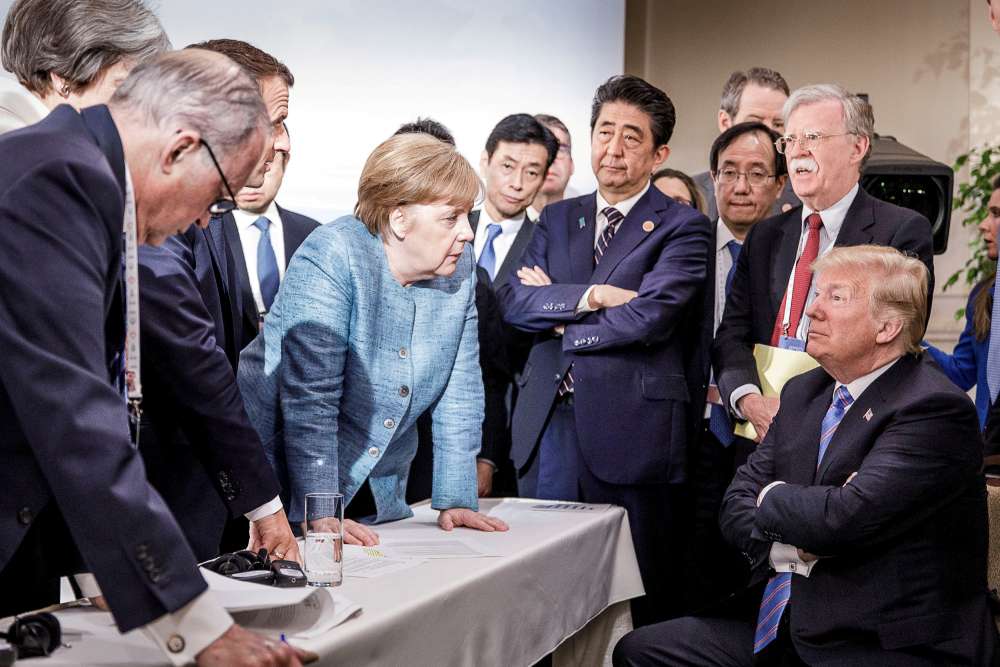 US President Donald Trump fired off a volley of tweets on Monday venting anger on NATO allies, the European Union and Canadian Prime Minister Justin Trudeau in the wake of a divisive G7 meeting over the weekend. The escalating clash over trade between Washington and some of its closest global partners cast a cloud over Trump‘s efforts to make history in nuclear talks in Singapore on Tuesday with Kim Jong Un of North Korea, one of America’s bitterest foes.

Having left the Group of Seven summit in Canada early, Trump‘s announcement that he was backing out of the joint communique torpedoed what appeared to be a fragile consensus on the trade dispute between Washington and its top allies.

“Fair trade is now to be called fool trade if it is not reciprocal,” said Trump, who flew from Canada to Singapore on Sunday to prepare for the first-ever summit between a US and North Korean leader.

“Sorry, we cannot let our friends, or enemies, take advantage of us on trade anymore. We must put the American worker first!”

The communique, which had appeared to have papered over the cracks that surfaced so uncharacteristically at the G7, said the leaders of the United States, Canada, Britain, France, Italy, Germany and Japan were agreed on the need for “free, fair, and mutually beneficial trade” and the importance of fighting protectionism.

“We strive to reduce tariff barriers, non-tariff barriers and subsidies,” the statement said, which came despite Washington appearing intent on taking more punitive steps on trade.

Trump‘s extraordinary outburst on Monday against NATO allies, the European Union and Canada appeared aimed at striking a chord with voters who support his “America First” agenda.

At the same time, however, it put Trump in the position of going into a crucial summit at odds with countries he needs on his side to pressure North Korea to move toward dismantling a nuclear arsenal that threatens the United States.

“Not fair to the people of America! $800 billion trade deficit,” he said. “Why should I, as president of the United State, allow countries to continue to make massive trade surpluses, as they have for decades, while our farmers, workers & taxpayers have such a big and unfair price to pay?”

It was left to Trump‘s aides to figure out how to explain Trump‘s airing of grievances against trading partners instead of focusing on his coming talks with Kim, which the president’s supporters hope will provide him with a major foreign policy win.

Secretary of State Mike Pompeo praised European countries for helping to bring about the North Korea summit, alluding to their enforcement of sanctions against Pyongyang. He expressed confidence that US relations with other G7 countries would continue to move forward, despite the weekend clash in Canada.

“There are always irritants in relationships,” Pompeo told reporters. He dismissed as “ludicrous” the notion that Kim would decide he could not trust the United States because of the G7 dispute.

White House spokesman Raj Shah said Trump was “rattling the cages right now on trade,” insisting there was no reason to believe there would be any negative fallout for the North Korea summit. “These are really unrelated baskets of issues.”

But one US official, speaking on condition of anonymity, acknowledged: “The timing for all this is not very good at all.”

The prospect that Trump could be moving toward an even greater protectionist trade policy is likely to chill financial markets worried about tit-for-tat escalation that could lead to a full-blown global trade war.

“Business confidence, and subsequently capital spending, is at risk if this tension continues through the summer,” said Tai Hui, J.P. Morgan Asset Management Chief Market Strategist for Asia Pacific. “This could cast a long shadow over global growth, which has rebounded in recent weeks after a soft start to the year.”

Nevertheless, markets were relatively calm on Monday after an early wobble.

“The US pays close to the entire cost of NATO – protecting many of these same countries that rip us off on trade (they pay only a fraction of the cost – and laugh!),” he tweeted. “The European Union had a $151 billion surplus – should pay much more for military!”

“Germany pays 1 percent (slowly) of GDP towards NATO, while we pay 4 percent of a much larger GDP. Does anybody believe that makes sense?”

“We protect Europe (which is good) at great financial loss, and then get unfairly clobbered on trade. Change is coming!”

“Justin acts hurt when called out!” the U.S. president said in his latest Tweet. On Saturday, he called the Canadian prime minister “very dishonest and weak.”

White House economic adviser Larry Kudlow accused Trudeau of betraying Trump with “polarising” statements on trade policy that risked making the US leader look weak ahead of the historic summit with Kim.

“(Trudeau) really kind of stabbed us in the back,” Kudlow, the director of the National Economic Council who had accompanied Trump to Canada, said on CNN’s “State of the Union.”

Trade adviser Peter Navarro told “Fox News Sunday” that “there is a special place in hell for any leader that engages in bad faith diplomacy” with Trump.

Pompeo, at the Singapore briefing, pointedly ignored a reporter’s question about Navarro’s comment and left the podium while he was being pressed for an answer.

Trudeau, in Quebec City for bilateral meetings with non-G7 leaders after the summit, did not comment as he arrived.

But he got direct personal support from some European leaders.

British Prime Minister Theresa May “is fully supportive” of Trudeau and his leadership, a senior UK government source said, while European Council President Donald Tusk tweeted: “There is a special place in heaven for @JustinTrudeau.

By In Cyprus
Previous articleParents of Brit murdered in Ayia Napa in plea for justice
Next articlePresident, ministers end voluntary cut to salaries