FACTBOX-Who will be Spain’s next PM? A profile of the candidates 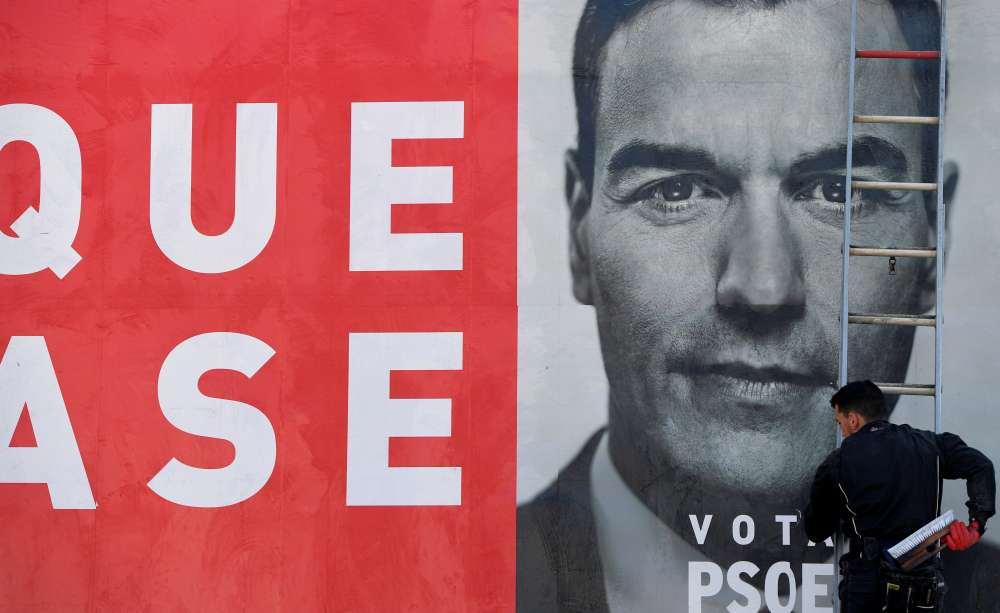 Spanish Prime Minister Pedro Sanchez’s Socialists are in the lead ahead of Sunday’s national election but opinion polls show no party will have enough seats to rule on its own, which could make for complicated coalition talks.

Following are snapshots of the top candidates – five men in their mid-30s to mid-40s – and their parties, as campaigning enters its final stretch with two televised debates scheduled for Monday and Tuesday evening..

With his Socialist party well ahead in opinion polls, outgoing Prime Minister Pedro Sanchez, 47, has the highest chance of leading Spain’s next government – if he can find enough allies in a fragmented political landscape.

Known early in his career as “El Guapo” or “The handsome”, a nickname he says he doesn’t like, Sanchez beat the odds when he managed to go from losing the leadership of his party in 2016 to becoming prime minister two years later, after unseating the conservatives in a non-confidence motion.

His supporters say he has a calm personality and a talent for compromise. Opponents say he lacks charisma and a clear political vision.

Sanchez benefits from the weakness of the far left and the division of the right wing between three parties.

He has focused his campaign on trying to rally left-wing voters against the possibility of seeing the far-right Vox in government, but also on women’s rights, and ordered the removal for re-burial of dictator Francisco Franco’s remains from a state mausoleum.

Sanchez’s government has raised the minimum wage by 22 percent, and tried to negotiate a greater degree of autonomy for Catalonia with its independence-minded government.

The right-wing parties have focused their attacks on Sanchez, and particularly on his Catalonia policies. On the other side, the Catalan separatists he may need to stay in power want him to be open to an independence referendum – which he opposes.

PSOE is Spain’s oldest active party and one of two that have dominated the political landscape since Franco’s dictatorship ended in 1975. It has been in government longest since then.

Pablo Casado, who has been leading the conservative People’s Party for less than a year, has taken a hard line in the campaign to try and win back voters opinion polls show are tempted to leave the mainstream party for the far-right Vox.

The PP, which has dominated the political scene alongside the rival Socialists for decades, could lose as many as half of its seats in parliament, opinion polls show.

The 38-year-old lawyer and economist became the leader of the conservative party a month after the government of his predecessor Mariano Rajoy was ousted over a corruption scandal in the party.

Casado is a defender of family values, the monarchy and the Catholic Church, an opponent of abortion and euthanasia, and has taken PP more to the right.

He has led an aggressive campaign in which he has accused Sanchez of being a “traitor” and of condoning violence for the Socialist leader’s approach to pro-independence parties in Catalonia.

He wants to strike an alliance with Ciudadanos and Vox to become prime minister. Opinion polls at this stage show they are unlikely to get enough votes – but there are so many undecided voters that things could still change.

At only 39 years old, Albert Rivera is one of the most experienced leaders of the youngest generation of candidates contending for the general election in Spain.

He worked in CaixaBank before founding Ciudadanos in 2006, a pro-European party originally from Catalonia which jumped to the national scene in 2015.

Like Casado, he strongly opposes making any concession to Catalan nationalists and has made it one of the main points of his campaign.

He named Ines Arrimadas – who was the party’s leader in Catalonia and won the highest number of votes in 2017 regional elections – his number two weeks before the election campaign.

Ciudadanos made an electoral pact last year in the region of Andalusia that enabled the PP, backed also by Vox, to unseat the Socialist administration there. That earned Ciudadanos criticism for embracing populist nationalism.

Having supported PP and PSOE in different regions, it could become a kingmaker in any foreseeable negotiations after the election. Rivera says he won’t strike an alliance with Sanchez, but the party has changed tack on such issues before.

The party first entered the 350-seat Spanish parliament in 2015.

PABLO IGLESIAS – UNIDAS PODEMOS (TOGETHER WE CAN)

Political scientist and lecturer Pablo Iglesias, 40, founded Podemos in 2014 with colleagues of the Complutense University, building up on the anti-austerity protest movement in Spain.

They were close to surpassing the Socialists in the last elections, but internal disputes led the former number two of the party to break up with Iglesias and launch an alternative platform for the regional election in Madrid.

Polls show Podemos losing traction from the last election, suffering from internal disputes and divisions over how hard-line the party, which supported Sanchez’s minority Socialist government and sits on some local councils, should be. This time they want to be in government with the Socialists.

Vox is the newcomer on the Spanish political scene. The party founded in late 2013 by former PP members opposes gender equality laws it says discriminate against men and is also strongly against autonomy for Spain’s regions.

Opinion polls show it will be the first far-right party to have more than one seat in parliament since Spain’s return to democracy in the late 1970s.

Last year, Vox sent shockwaves through Spain’s political landscape by unexpectedly winning 12 seats in Andalusia’s regional parliament, which automatically allowed it to have a seat in Spain’s Senate.

“The reconquer (of Spain) starts in Andalusia”, Vox’s leader Santiago Abascal, 42, said in a tweet.

The tough-talking career politician from the Basque country is gaining support in the polls with the party’s pledge to “make Spain great again”.

Abascal will be missing out on the TV debates after the country’s election board decided he could not take part.

Also echoing Trump’s anti-immigration rhetoric, Abascal has called for a secure wall to be built around the Spanish enclaves of Ceuta and Melilla and have neighbouring Morocco pay for it.

“I am a supporter of discrimination,” he told 7TV Andalucia in 2017.