EU – Turkey: No substantial progress has been achieved 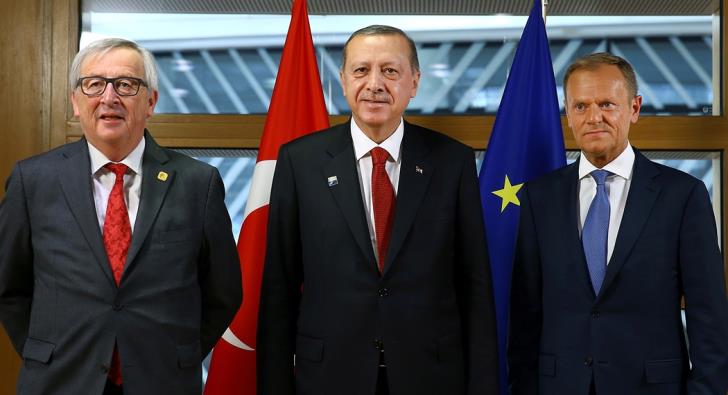 Jean-Claude Juncker and Donald Tusk confronted Erdoğan with all crucial outstanding issues relating to EU-Turkey relations, asking him to take a view, during the EU-Turkey summit in Varna. They insisted on Turkey’s illegal activities in the Aegean and the Cypriot EEZ, decried their stance in Afrin and raised at the same time the issue of the two Greek soldiers.

The European Council President, Donald Tusk, stated that the European Union leaders did not receive any concrete answer from Turkish President, Recep Tayyip Erdoğan, to a long list of concerns, highlighting particularly the Turkish military operation in Syria, human rights,  Greece and Cyprus. “We didn’t achieve any kind of concrete compromise today”, Tusk told reporters after talks with Erdoğan in Varna.

“But I still hope that will be possible in the future… Only progress on these issues will allow us to improve the EU-Turkey relations, including the accession process”, he added.

The EU reiterated its support for the sovereign right of the Republic of Cyprus to explore and exploit its natural resources within its own EEZ, European Council President, Donald Tusk stressed, after the meeting of the leaders of the European Union with Turkey’s President Recep Tayyip Erdoğan, in Varna, Bulgaria.
We voiced our concerns about Turkey’s current actions in the Eastern Mediterranean and the Aegean and of course the continued detention of EU citizens, noted the European Council President.

He further stressed that solution of the Cyprus problem is very important for the EU, since it will not only improve relations between Cyprus and Turkey but also between Greece and Turkey.

The European Council President also mentioned that EU and Turkey want to expand their cooperation with regard to Foreign Terrorist Fighter.

For his part, Jean-Claude Juncker stressed that is it “necessary” for Turkey to improve its relations with Greece and Cyprus.

He also pointed out that he wants Turkey to be a real strategic partner of the EU. He added that Turkey and the EU must opt for an earnest and substantial dialogue, since the two sides share common interests and challenges in which they need to work together.

In addition to the above, he asked the Turkey’s President Recep Tayyip Erdoğan to “reconsider” the issue of detention of the Greek soldiers.

The President of the European Commission expressed his opposition to “simplistic and superficial” idea about cutting off Turkey’s EU accession process.

EU leaders expressed today to the Turkey’s President Recep Tayyip Erdoğan during their meeting in Varna, Bulgaria, their concern over Turkey’s military operations in Afrin, Syria.  According to information, it was agreed to set up a number of joint committees on several topics, as well as a second meeting – without mentioning the level of representation, for June.

Erdoğan: “Turkish Cypriots should be equally included in issues concerning the Eastern Mediterranean”

“Today, we took the first step to improve the dialogue” between Turkey and the EU, mentioned  the Turkey’s President Recep Tayyip Erdoğan  during a joint press conference with Donald Tusk and Jean-Claude Juncker, right after his meeting with the EU leadership in Varna.

Regarding Turkey’s accession course, he said that the country has been a candidate for accession since 1963 and called for an acceleration of the accession negotiations.

When it comes to migration, T. Erdoğan stressed that there are 3 million refugees in Turkey and that due to the ongoing flows from Syria, that number will reach 4 million.

He criticized the EU mentioning that only €1.8 billion out of the first package of €3 billion reached Turkey and expressed the hope that the procedures will be speeded up this time for the additional €3 billion approved by the EU. T. Erdoğan further noted that Turkey needs more support on behalf of the EU Facility for Refugees fund in order to improve refugee living conditions and make it easier for Turkish authorities.

With regard to the matter of lifting the Visa requirements for Turkish citizens, T. Erdoğan said that the Turkish side fulfilled its obligations and that this issue should no longer be pending.

He referred to Customs Union issue as a “technical” issue which could have been addressed by the European side.

Referring to the issue of Cyprus, T. Erdoğan said the EU should stop criticizing Turkey. He stressed that the exploration and exploitation of assets on the territory of Cyprus should be done in accordance with international law. He pointed out that Turkish Cypriots should be equally included in issues concerning the Eastern Mediterranean.

To conclude, the Turkish president called on the EU to work more closely with Turkey in countries such as Syria, Iraq, Palestine, Yemen, Rwanda and Afghanistan.