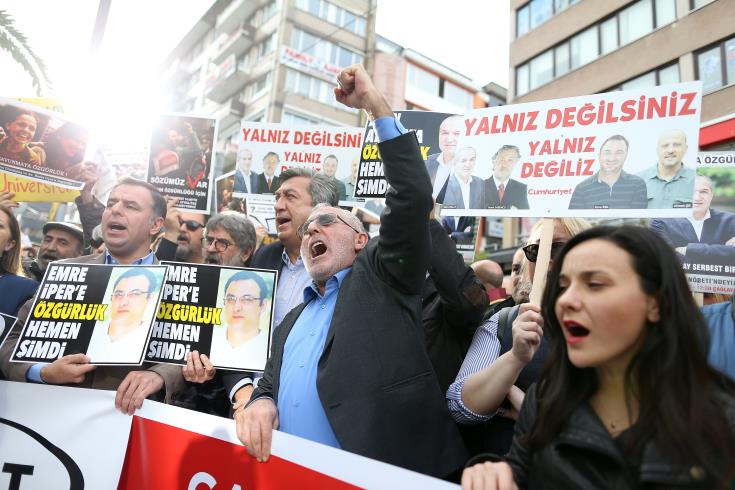 About 155 journalists are in prison in Turkey and 520 are facing charges, 130,000 websites and another 200 media outlets have shut down, while 4,822 academics have been fired and 1,370 judges have been relieved of their duties after the state of emergency was declared.

Turkey is the largest prison Frane Maroevic, Director of the Office of the OSCE Representative on Freedom of the Media, said, noting that about 155 journalists are in prison in Turkey, 130,000 websites and 200 media outlets have shut down. This, he pointed out, does not just concern freedom of the press but also freedom of expression of the individual.

Maroevic also said that it is a problem when people are interrogated or prosecuted about messages they sent or posted on social networks. Last February, he added, this is what happened to 200 people because of their comments about Turkey’s operation in Afrin, Syria.

Tayyip Erdogan seems to be sending a message that ‘you are either with me or with the terrorists’, said Dutch MEP and European Parliament’s Rapporteur on Turkey Kati Piri. Her report on Turkey is expected to be submitted before the summer.

Freedom of the press and freedom of expression are fundamental freedoms and politicians cannot define who are good or bad journalists, she stressed. She also noted that many journalists have been jailed in Turkey simply because they did their job while academics and students have been imprisoned after the failed coup of July 2016, because they do not agree with the government’s policy.

The EU can support these principles and continue to treat Turkey as an EU candidate member state, showing solidarity to Turkey’s citizens but also maintaining a tough stand on the country’s authorities. The MEP called for a free exercise of the profession of journalism, the monitoring of the trials of journalists and others who are been prosecuted, of visiting people in prison and said she has asked for an increase in the EU budget provision which has to do with supporting freedom of press in Turkey.

Myriam Ferran, Director of Strategy and Turkey in EU’s Directorate-General for Neighbourhood and Enlargement Negotiations (DG NEAR), expressed on her part the Commission’s concern about the fact that the elections in Turkey of June 24 will take place under a state of emergency and about the new anti-terrorism legislation which provides a legal basis for the imposing restrictions on many freedoms.

The Commission treats Turkey as a candidate member state, tries to keep communication channels open and expresses its concerns at a high level, Ferran said and she also referred to the financial support the EU offers to civil society, academics and others for the defence of freedoms.

On her part, Turkish journalist Nevsin Mengu, who now works for Deutsche Welle, painted a bleak picture about the situation in her country, noting that if Turkish President Tayyip Erdogan is annoyed by a journalist and he refers to his name in public, the next day that journalist finds himself in prison.

Let us admit it, she said, there are no institutions in Turkey today, adding that these existed 15 years ago but not anymore.

Hasan Cemal, president of the P24 independent media group, who has served in the past as editor in chief of Cumhuriyet newspaper said that the situation in Turkey on freedom of expression and media is “very bad.”

“We are witnessing an approach which considers that journalism is a criminal offence, it does not recognise the freedom of the press and freedom of expression. Erdogan’s Turkey inspires fear and restricts freedoms,” he added.

Yaman Akdeniz, Professor at Bilgi University, said that 180 journalists are in prison today in Turkey while 520 are facing charges. He also said that 4,822 academics have been fired from 118 universities. The above, he noted, happened mainly after the failed coup and during the state of emergency which is still in place.

In addition, 1,140 judges have been removed from their duties while another 230 judges of higher courts, such as the Constitutional Court have also been removed.

Akdeniz also said that since the state of emergency was declared 175,000 webpages have been blocked, as well as 120,000 URLs, thousands of twitter accounts are not accessible and Wikipedia has been blocked for quite some time in Turkey.