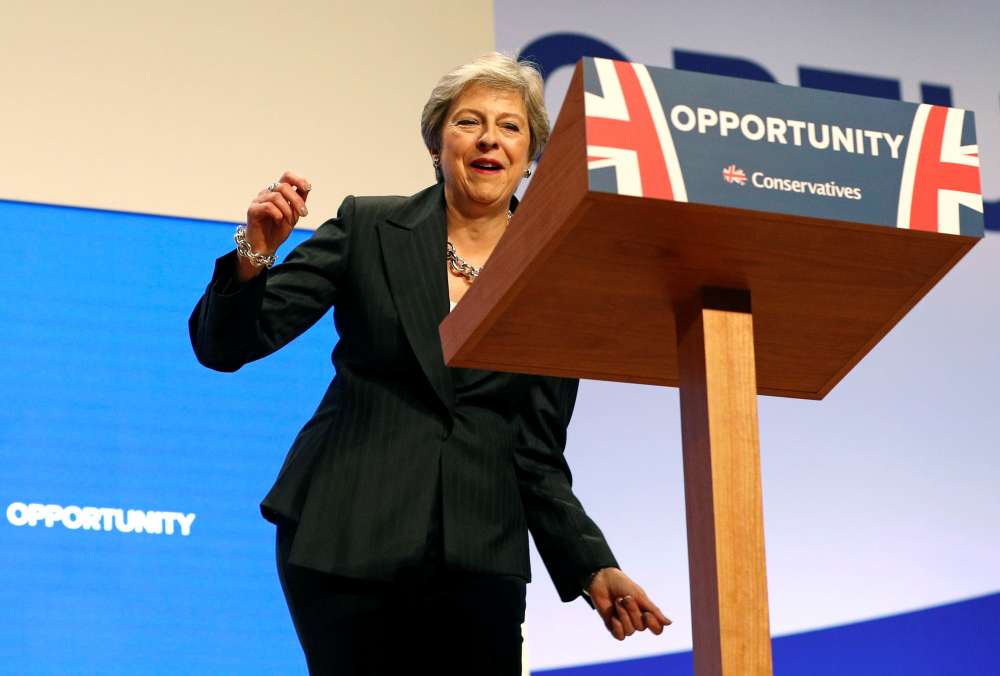 British Prime Minister Theresa May danced onto the stage in Birmingham to ABBA’s “Dancing Queen” to call the Conservative Party on Wednesday to unite behind her plan to leave the European Union, warning critics their arguments could put Brexit in jeopardy, Reuters reported.

On the final day of her party’s conference, May rallied members, trying to address their concerns that the Conservatives are becoming increasingly directionless under the weight of Brexit by calling on them to look to a brighter future.

After dancing to ABBA and a standing ovation, May poked fun at herself after her dance moves were mocked on a trip to Africa and after last year’s conference when her speech was disrupted by a coughing fit, a stage intruder and a disintegrating set.

It was a warm welcome for a leader whose fragile position at the helm of her party has been put under further pressure after the EU rejected parts of her so-called Chequers plan and critics stepped up calls for her to ditch her strategy on Brexit, Britain’s biggest policy shift for more than 40 years.

With just six months before Britain is due to leave the bloc, she has so far weathered the Brexit storm, shrugging off a barnstorming speech by her former foreign minister Boris Johnson, which did little to hide his leadership ambitions.

On Wednesday, she was keen to show she was in charge of the Brexit talks.

“If we all go off in different directions in pursuit of our own vision of the perfect Brexit, we risk ending up with no Brexit at all,” she said, a rebuff to eurosceptic lawmakers who have published their alternatives plan for leaving the EU.

“And there’s another reason why we need to come together. We are entering the toughest part of the negotiations … What we are proposing is very challenging for the EU. But if we stick together and hold our nerve I know we can get a deal that delivers for Britain.”

She also tried to return to the message she gave when she was appointed prime minister in 2016, promising to help those who feel “left behind”, many of whom voted to leave the EU in the referendum of that year.

And in another call for unity, she attacked the main opposition Labour Party, saying their policies, including the renationalisation of mail, rail and utilities, would mean increased taxes and drive away business.

Labour leader Jeremy Corbyn, she said, would “outsource our conscience to the Kremlin.”

Her words were aimed at easing the growing frustration of some Conservatives who openly say their party is directionless, unable to set an agenda against the divisive rows over Brexit between competing wings of the party.

The pressure she is under from some in the party was underlined less than an hour before she was due to speak when Conservative lawmaker James Duddridge said he had submitted a letter calling on her to resign. Forty-eight lawmakers would need to write such letters to trigger a vote of confidence in the leader.

But Wednesday’s speech seemed to have gone down well among the party faithful.

Jeremy Hunt, her foreign minister, said on Twitter: “Congratulations Theresa May for a remarkable speech delivered with humour and passion. Firmness of purpose, clarity and conviction – EU friends do not underestimate!”

“It was what the party and the country needed, a rip-roaring speech looking towards the future,” said party member Paul Whitehouse.

“My only word of caution, because like many grassroots Conservatives I’m a strong, strong Brexiteer, so I’m hoping with the next round of talks the prime minister goes ahead with the same vehement passion she showed in the auditorium.”

Taking a swipe at Johnson, May said she was taking decisions on Brexit in the “national interest”, pressing her argument that her former foreign secretary’s alternative Brexit proposals would tear the United Kingdom apart.

“It is no surprise that we have had a range of different views expressed this week,” she said.

“But my job as prime minister is to do what I believe to be in the national interest. And that means two things. First, honouring the result of the referendum … and secondly, to seek a good trading and security relationship with our neighbours after we have left.”

With no agreement with the bloc over the divorce or a future relationship, the last day of the conference marks the beginning of what some officials predict will be a frenzied couple of weeks of diplomacy between London and Brussels as the two sides try to secure a deal to end more than 40 years of partnership.

May and her team face weeks of difficult conversations with Brussels to win a deal, but she also faces challenges from inside her own party and from her partners in parliament, Northern Ireland’s Democratic Unionist Party.

DUP leader Arlene Foster repeated that she will not accept a border between Northern Ireland and the rest of the United Kingdom.

In her speech, May stuck to her plan, called the Chequers proposal after her country residence where she hashed out the proposals in July.

“So this is our proposal. Taking back control of our borders, laws and money. Good for jobs, good for the Union. It delivers the referendum, it keeps faith with the British people,” she said.