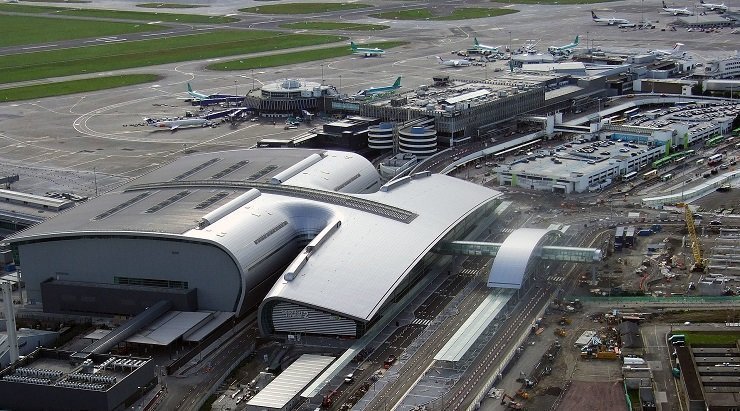 A passenger has been pinned to the ground by police at Dublin Airport after running out of the terminal towards a plane and shouting at the pilot to wait.

The incident happened shortly before 07:00 local time on on Thursday.

Moments earlier the man was inside banging on the window of the terminal and asking ground crew to hold the plane.

He made it to the taxiing Ryanair aircraft before police arrested him.

A ground crew member said the man “just ran from the building towards the plane,” which was departing for Amsterdam.

Two police cars and a police van dealt with the incident.

The passenger, who appeared to be in his 30s, did not make it on board and the flight departed 21 minutes behind schedule.

In a statement, an airport spokesman said: “A male and female passenger were late for a Ryanair flight to Amsterdam this morning and arrived at the boarding gate after the flight had closed.

A late passenger has been pinned to the ground by @DublinAirport police after running out of the terminal towards the plane pleading and shouting at the pilot to wait. 1/…@BBCNewsNI pic.twitter.com/TJL22qfNCt

“They were engaging with Ryanair staff at the gate and the male passenger was becoming agitated.

“He was banging on the window to try and get the aircraft to wait and he then broke through a door and made his way onto the apron, trying to flag the aircraft down.

“He was was initially restrained by Ryanair staff on the apron and airport police, who had already been contacted, arrived on the scene almost immediately and arrested him.

“He was taken to the Airport Police Station and will be handed over to the Gardai (Irish police).”

Ryanair said: “Police at Dublin Airport detained an individual who breached security at the boarding gate, which had already closed. This is now a matter for local police.”

According to airport operator DAA, 14.7 million passengers travelled through Dublin Airport in the first six months of this year.