Dozens killed, including children on a bus, in Yemen air strikes 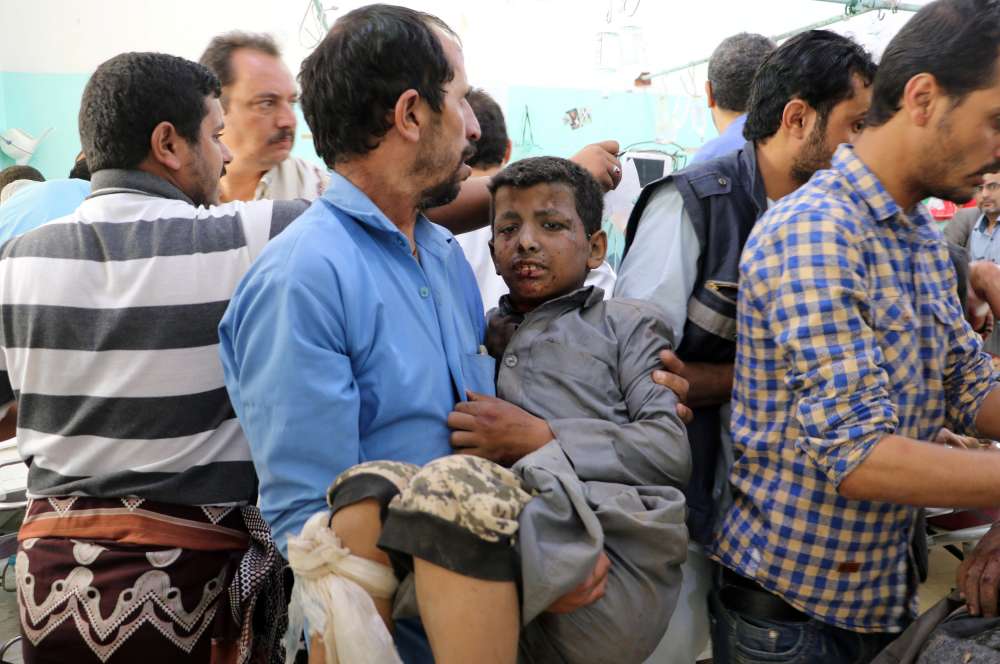 Saudi-led coalition air strikes on Thursday killed dozens of people, including children travelling on a bus, in Yemen’s Saada province, Yemeni medical sources and the International Committee of the Red Cross (ICRC) said.

It accused the Houthis of using children as human shields.

“Today’s attack in Saada was a legitimate military operation … and was carried out in accordance with international humanitarian law,” the Arabic-language statement said.

The ICRC said one attack hit the bus driving children in Dahyan market, in northern Saada, adding hospitals there had received dozens of dead and wounded.

It was unclear how many children were killed and how many air strikes were carried out in the area, in northern Yemen, near the border with Saudi Arabia.

Abdul-Ghani Nayeb, head of a health department in Saada told Reuters that the death toll rose to 43, with 61 wounded.

“Scores killed, even more injured, most under the age of 10,” Johannes Bruwer, head of delegation for the ICRC in Yemen, said in a twitter post.

Saudi Arabia and Sunni Muslim allies have been fighting in Yemen for more than three years against the Houthis, who control much of north Yemen including the capital Sanaa and drove the government into exile in 2014.

It has launched thousands of air strikes in a campaign to restore the internationally recognised government of President Abdrabbuh Mansour Hadi. Errant strikes have killed hundreds of civilians at hospitals, schools and markets.

The military alliance says it does not target civilians and has set up an investigation committee into alleged mass casualty air strikes which have mostly cleared the coalition of any blame.

The Houthis have launched a series of missile strikes on the kingdom, including Riyadh, over the past year. Fragments from a missile launched at the Jizan Industrial City in southern Saudi Arabia late on Wednesday, killed one Yemeni civilian and wounded 11, Saudi state media said earlier on Thursday.

Al-Masirah, the TV station of the armed Houthi movement, said on its Twitter account that 39 people had been killed and 51 wounded. There was no immediate comment from the Houthis in reponse to the coalition allegations.

Saada, the main stronghold of the Houthis, has mainly come under air strikes from the coalition in Yemen’s war, as the mountainous province makes battles hard for pro-government ground troops.

The Yemen war has killed more than 10,000 people, displaced more than 2 million and driven the country to the verge of famine, according to the United Nations