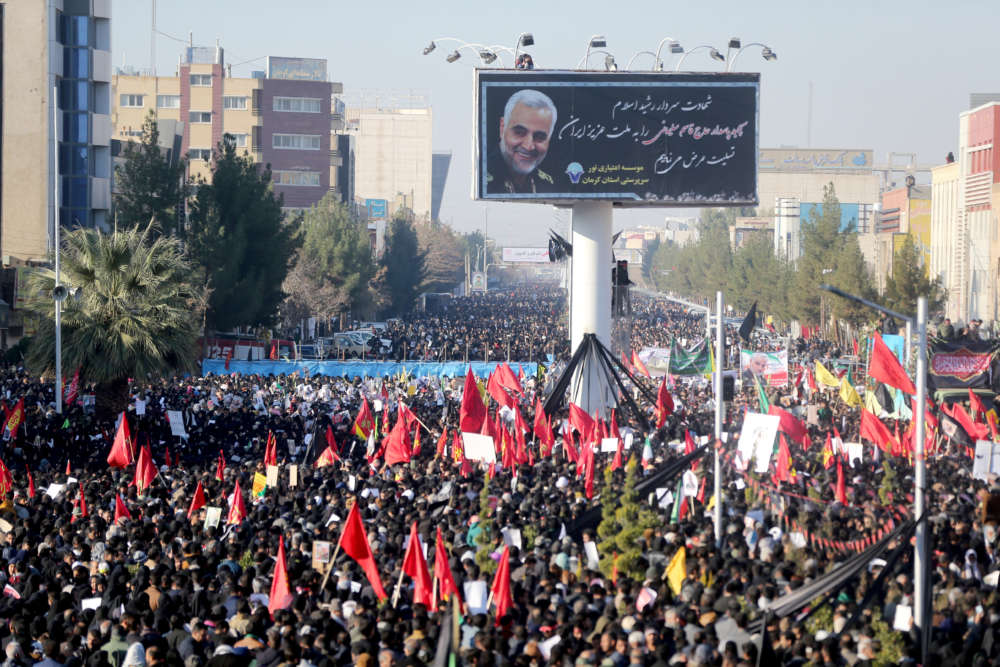 Dozens of people were killed in a stampede as mourners packed streets for the funeral of a slain Iranian military commander in his hometown on Tuesday, forcing his burial to be postponed, state-affiliated media reported.

Tens of thousands of people had gathered in the southeastern city of Kerman to pay tribute to General Qassem Soleimani, whose killing in a U.S. drone strike in Iraq on Friday plunged the region into a new crisis and raised fears of a broader conflict.

A senior Iranian official said Tehran was considering several scenarios to avenge his killing. Other senior figures have said Iran will match the scale of Soleimani’s killing when it responds but that it will choose the time and place.

Tuesday’s stampede broke out amid the crush of mourners, killing at least 40 people and injuring about 213, an emergency services official told the semi-official Fars news agency.

Iran’s ISNA news agency said the burial of Soleimani had been postponed, but did not say how long any delay would last.

“Today because of the heavy congestion of the crowd unfortunately a number of our fellow citizens who were mourning were injured and a number were killed,” emergency medical services chief Pirhossein Kolivand told state television.

The body of Soleimani, a national hero whose death has united many Iranians, had been taken to Iraqi and Iranian cities before arriving in Kerman for burial.

Soleimani, who commanded the elite Quds Force, was responsible for building up Tehran’s network of proxy armies across the Middle East. He was a key figure in orchestrating Iran’s long-standing campaign to drive U.S. forces out of Iraq.

The U.S. defense secretary denied reports the American military was preparing to withdraw from Iraq, where Tehran has vied with Washington for influence since the 2003 U.S. invasion.

“We will take revenge, a hard and definitive revenge,” the head of Iran’s Revolutionary Guards, General Hossein Salami, told the crowds in Kerman before the stampede.

Ali Shamkhani, secretary of the Supreme National Security Council, said 13 “revenge scenarios” were being considered, Fars news agency reported. Even the weakest option would prove “a historic nightmare for the Americans,” he said.

Iran, whose coastline runs along a Gulf oil shipping route that includes the narrow Strait of Hormuz, has allied forces across the Middle East through which it can act. Representatives from those groups, including the Palestinian group Hamas and Lebanon’s Hezbollah movement, attended funeral events in Tehran.

Despite its strident rhetoric, analysts say Iran will want to avoid any conventional conflict with the United States and will likely focus on asymmetric strikes, such as sabotage or other military action via proxies.

Trump has promised to target 52 Iranian sites if Iran retaliates.

Reuters and other media reported on Monday that the U.S. military had sent a letter to Iraqi officials informing them that U.S. troops were preparing to leave.

“In order to conduct this task, Coalition Forces are required to take certain measures to ensure that the movement out of Iraq is conducted in a safe and efficient manner,” it said.

But U.S. Defense Secretary Mark Esper denied there had been any decision to leave. “I don’t know what that letter is,” he said.

U.S. Army General Mark Milley, chairman of the Joint Chiefs of Staff, said the letter was a “poorly worded” draft document meant only to underscore increased movement by U.S. forces.

About 5,000 U.S. troops are still in Iraq, where there has been a U.S. military presence since Saddam Hussein was toppled in 2003.

Iraq’s parliament, dominated by lawmakers representing Muslim Shi’ite groups who have been united by Friday’s killing of Soleimani alongside an Iraqi militia leader, passed a resolution on Sunday calling for all foreign troops to leave the country.

Friction between Iran and the United States has risen since Washington withdrew in 2018 from a nuclear deal between Tehran and other world powers.

The United States has imposed economic sanctions on Iran, slashing Iranian oil exports, and Tehran said on Sunday it was dropping limitations on uranium enrichment, in its latest step back from commitments to the deal.

Washington denied a visa to Iranian Foreign Minister Mohammad Javad Zarif to allow him to attend a U.N. Security Council meeting in New York on Thursday, a U.S. official said.

Trump’s U.S. political rivals have challenged his decision to order the killing of Soleimani and questioned its timing in a U.S. election year. His administration said Soleimani was planning new attacks on U.S. interests without giving evidence.

U.S. general Milley said the threat from Soleimani was imminent. “We would have been culpably negligent to the American people had we not made the decision we made,” he said.

Trump administration officials will provide a classified briefing for U.S. senators on Wednesday on events in Iraq after some lawmakers accused the White House of risking a broad conflict without a strategy.