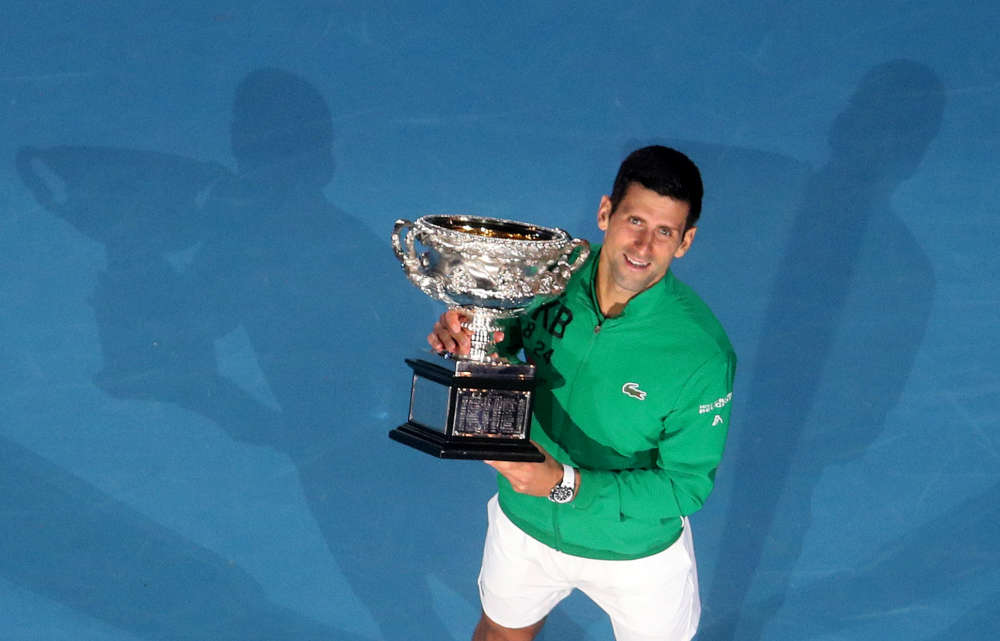 Novak Djokovic endured a fierce challenge to his Melbourne Park reign before overhauling Dominic Thiem 6-4 4-6 2-6 6-3 6-4 on Sunday to clinch an eighth Australian Open crown and reclaim the world number one ranking.

While Rafa Nadal rules Roland Garros with 12 titles, Djokovic holds sway in the title match at Rod Laver Arena having never lost a final in Melbourne Park. Yet on Sunday the Serb was under siege for much of the thriller.

For the first time in eight Melbourne finals, Djokovic was forced to come back when trailing after three sets, rocked by the power and determination of Thiem.

But as he so often does, the Serb found a way.

He captured the decisive break in the third game of the final set, then held firm as Thiem made desperate assaults on his serve.

Going for broke in a nerve-shredding final game, the fifth seeded Austrian went for the lines but missed on the first championship point to hand Djokovic one of his most hard-earnt triumphs.

“This is definitely my favourite court, my favourite stadium in the world and I am blessed to hold this trophy again,” said Djokovic after being presented with the Norman Brookes Challenge Cup by 2005 winner Marat Safin.

Thiem, seen as one of the greatest hopes to end the Big Three domination, was consigned to his third defeat in a major final following losses in the last two French Open deciders to Nadal.

“Unreal what you are doing through all these years. You and two other guys have brought men’s tennis to a completely new level,” the 26-year-old told Djokovic at the trophy ceremony.

“Well I fell a little bit short but I hope I can get revenge soon.”

While Thiem started heavy-legged after spending a total of eight hours beating Alexander Zverev and Nadal in his previous two matches, Djokovic charged out of the blocks to take the first set.

But the match turned on its head at 4-4 in the second when Djokovic became flustered after being called twice for breaching the service clock.

He returned to his chair fuming and paused to sarcastically pat chair umpire Damien Dumusois’s sneaker, telling the Frenchman: “Great job man, you made yourself famous in this match, especially for the second one. Well done.”

Conceding the set with a terrible backhand, a shellshocked Djokovic lost six games in a row as Thiem, blasting winners virtually at will, roared to a 4-0 lead in the third.

Something was amiss with the Serb and he called for the trainer after holding serve. But he underwent no treatment and resumed after an exchange of words.

He made a fist of digging in, saving three set points but a wayward forehand on the fourth gave Thiem the lead.

It looked gloomy for Djokovic, who had destroyed Nadal in three sets in the 2019 final.

But the match turned again when Thiem gave up a double-fault to concede two break points, then blasted a forehand long to fall 5-3 behind in the fourth set.

In a flash, Djokovic had served out the set to love, sealing it with an ace.

Having spent about six hours more time on court than Djokovic through the tournament, the strain of a long campaign began to tell on Thiem but he refused to crumble in the fifth.

He had two chances to break back in the fourth game but Djokovic nervelessly cancelled the threat before holding firm in the nerve-jangling finish.