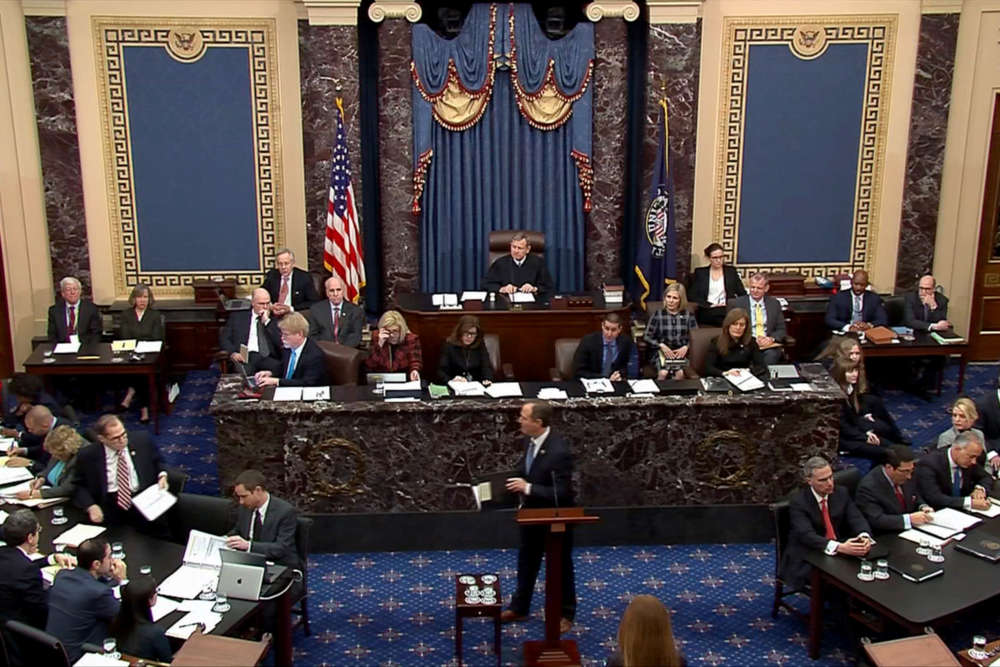 On the second day of their arguments for Trump’s removal from office, Democratic House of Representatives members argued that Biden did nothing wrong and was only carrying out official U.S. policy when he pressured Ukraine to fire its top prosecutor, Victor Shokin, because of corruption concerns.

Trump and his allies maintain that Biden wanted Shokin out in order to head off an investigation into a natural gas company, Burisma, where his son Hunter served as a director. Democrats said no evidence supported that allegation.

In more than eight hours of argument, House managers spent Thursday focusing on the charge that Trump abused his office by pressing Ukraine to investigate the Bidens purely for political gain.

They contended that Trump pushed for the probe because he was worried about facing the former vice president in November’s election. Biden is the front-runner for the Democratic presidential nomination.

“If we allow this gross abuse of power to continue, this president would have free rein – free rein – to abuse his control of U.S. foreign policy for personal interest, and so would any other future president,” U.S. Representative Sylvia Garcia said on the Senate floor. “And then this president, and all presidents, become above the law.”

Democrats contend senators should convict Trump on two charges brought by the Democratic-led House – abuse of power and obstruction of Congress.

But the Senate, which is controlled by Trump’s fellow Republicans, remains unlikely to do so. A two-thirds majority is needed to remove him from office.

Even so, Democrat Adam Schiff, the lead House manager, ended the evening by commending the senators who had endured a long day of arguments.

“I just want to thank you keeping an open mind about all of the issues that we are presenting,” Schiff said. “That’s all that we can ask for.”

The U.S. Constitution sets out the impeachment process for removing a president who commits “high crimes and misdemeanors.” Trump’s legal team has argued that the House charges were invalid because impeachable offenses must represent a specific violation of criminal law.

The charges against Trump arise from his request in a July 25 phone call last year that Ukraine investigate Biden on unsubstantiated corruption allegations and the president’s actions to impede a House inquiry into the matter.

Trump also asked Ukrainian President Volodymyr Zelenskiy to investigate a discredited theory beneficial to Russia that Ukraine worked with Democrats to hurt Trump in the 2016 U.S. election. Trump temporarily withheld $391 million in U.S. military aid to Ukraine, which Democrats say was leverage for his demands.

Trump’s lawyers quickly argued that by bringing up the Bidens, Democrats had made their conduct a relevant subject for the rest of the trial.

“They opened the door. They opened the door and it’s now relevant,” Jay Sekulow, a personal lawyer for the president and a member of his defence team, told reporters at the Capitol. “So we will address the appropriate issues as defence lawyers would.”

Added Republican Senator Ted Cruz: “Hunter Biden is not only relevant, he is now critical.”

But Sekulow said Trump’s team was not yet focused on whether new witnesses will be called, a matter the Senate will take up after senators have a chance to submit questions to both sides next week.

Trump’s lawyers are likely to begin their defence of the president on Saturday, after House Democrats finish their opening arguments.

Schiff said House managers on Friday would focus on the charge that Trump unlawfully obstructed Congress by keeping key administration officials from testifying and by refusing requests for documents.

As the arguments again went deep into the evening, Republican senators continued to complain the House presentation had become repetitive and that they were looking forward to the president’s defense.

Democrats countered by saying Republicans had blocked their attempts to bring new evidence to light through additional witnesses and documents.

Signs emerged on the second day of arguments that the Democratic case was losing some of the public’s attention. Throughout the session, there were empty seats in the gallery overlooking the Senate floor.

Television ratings were down. About 8.9 million viewers watched the first day of arguments on Wednesday, falling short of the roughly 11 million who watched on Tuesday, according to Nielsen ratings data.

Senators also showed increasing signs of restlessness, with many wandering to the rear of the chamber where they could make phone calls and check their smartphones.

At one point late on Thursday, Republican Senator Thom Tillis wandered into the gallery overhead – and stayed there for a spell, watching the proceedings below.

By In Cyprus
Previous article
Paphos murder: Suspect due in court for remand hearing
Next article
Nostalgic images of yore by “Limassol Old Times” (photos)