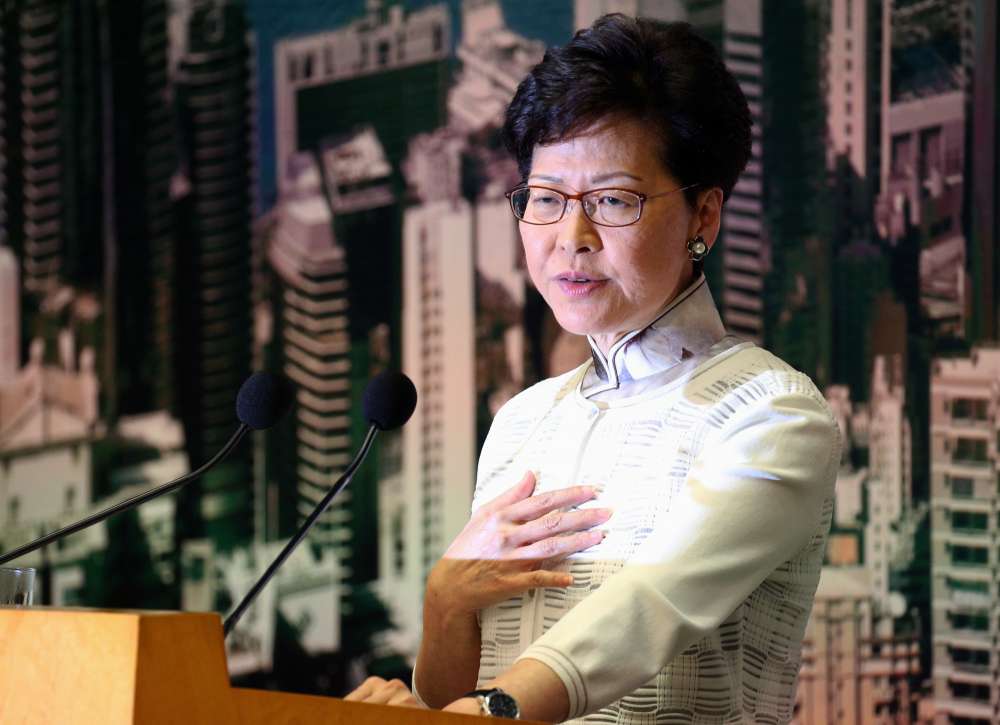 Beijing will not let Hong Kong’s leader, Carrie Lam, step down even if she wanted to, a senior city government official close to her said on Monday, adding that a divisive extradition law she delayed on the weekend was effectively withdrawn.

Opposition to the proposed law allowing extradition to mainland China has sparked the city’s biggest and most violent street protests in decades over the past week.

But her dramatic gesture failed to mollify a city increasingly outraged over the prospect of legislation that lawyers and judges say risks exposing people to the mercy of a mainland justice system plagued by torture, forced confessions and arbitrary detention.

The bill, which will cover Hong Kong residents and foreign and Chinese nationals living or travelling through the city, has also sparked concern it would threaten the rule of law that underpins Hong Kong’s international financial status.

A crowd of what organisers said was more than two million protesters, many dressed in black, swarmed over swathes of Hong Kong island on Sunday, chanting for Lam to quit.

But despite the anger, she was unlikely to go, said the government official, who declined to be identified given the sensitivity of the matter.

“It’s not going to happen,” said the official, who has been involved in meetings on the political crisis.

The turmoil in Hong Kong comes after years of resentment in the former British colony over what many residents see as increasingly repressive meddling by Beijing, despite a “one country, two systems” promise of autonomy that paved the way for its return to Chinese rule in 1997.

Now the city’s agitation has become another problem for China’s leader Xi Jinping, already grappling with a trade war with the United States, a U.S.-led clamp-down on tech giant Huawei and tension in the South China Sea.

“She’s appointed by the central government, so for her to step down requires a very high level of considered discussion and deliberation at the mainland level,” the official said.

Lam’s departure now would only exacerbate the crisis for Beijing, the source said.

“It would create more sorts of problems than it solves, at all sorts of levels.”

With the crowd growing ever bigger on Sunday, and the chants for Lam to go echoing off the gleaming office towers of the Asian financial hub, Lam apologised, acknowledging that “deficiencies in the government’s work had led to substantial controversies and disputes in society”.

The government official said the decision to postpone the bill had been made with Beijing’s consent, to the relief of many in the city administration.

But analysts said such a climb-down could undermine Xi’s image as a tough, unyielding leader who has overseen a drive against corruption and dissent since he became top leader in 2012.

China’s Hong Kong and Macau Affairs Office did not immediately respond to a request for comment on whether Beijing would allow Lam to quit.

The foreign ministry spokesman, asked about her fate, referred reporters to a statement issued on Saturday, in which the Hong Kong and Macau Affairs Office said the government had “always fully affirmed” Lam’s work and “will continue to firmly support the chief executive”.

Beijing rejects accusations of meddling and Chinese state media has said “foreign forces” were trying to damage China by creating chaos over the bill.

The government official said the proposed law was effectively dead in the water.

“Suspending it actually means withdrawal … it would be absolute political suicide to bring it back again,” the official said.

Lam was voted in by an electoral college of Beijing-approved delegates, after Beijing rejected demands for universal suffrage in the city.

The senior official said the protests had probably damaged Lam politically in the eyes of Beijing and it was “doubtful” that she would seek a second term.

Regina Ip, a member of the city’s top Executive Council and an adviser to Lam, told Reuters she did not think Lam would resign, despite the calls from the protesters.

“She has missed golden opportunities to show repentance and recover and now has lost all credibility to govern,” he said.

By In Cyprus
Previous articleCyprus’ beaches have the best water quality in the EU
Next articleJob vacancy rate in the euro area at 2.3% in the first quarter of 2019