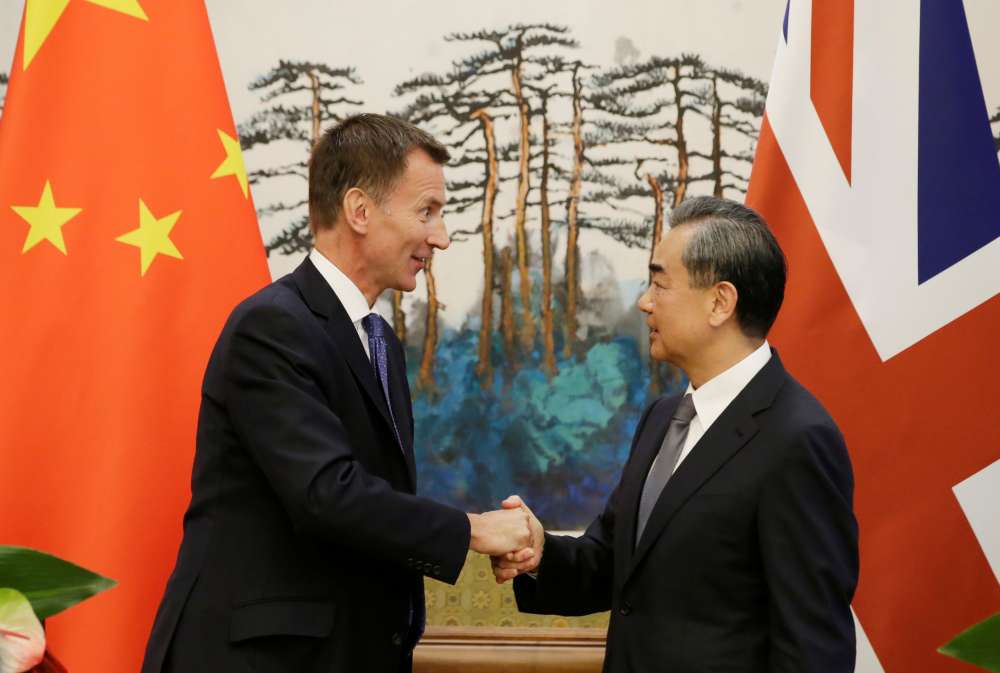 China offered Britain talks on a post-Brexit free trade deal on Monday, reaching out to London as Beijing remains mired in an increasingly bitter trade war with Washington, even as a senior Chinese diplomat reiterated its door remained open for dialogue.

China has been looking for allies in its fight with the United States, initiated by the Trump administration, which says China’s high-tech industries have stolen intellectual property from American firms and demanded Beijing act to buy more U.S. products to reduce a $350 billion trade surplus.

Britain has pushed a strong message to Chinese companies that it is fully open for business as it prepares to leave the European Union next year, and China is one of the countries with which Britain would like to sign a post-Brexit free trade deal.

Speaking to reporters in Beijing after meeting British Foreign Secretary Jeremy Hunt, the Chinese government’s top diplomat, State Councillor Wang Yi, said both countries agreed to step up trade with and investment in each other.

Hunt said Wang had made an offer “to open discussions about a possible free trade deal done between Britain and China post Brexit”.

“That’s something that we welcome and we said that we will explore,” Hunt said, without elaborating.

Wang, standing next to Hunt at a state guest house in the western suburbs of Beijing, made no direct mention of the free trade talks offer but said both countries had “agreed to proactively join up each others’ development strategies, and expand the scale of trade and mutual investment”.

While a trade pact with China would be a political win for Britain’s government, formal talks cannot begin until it officially leaves the EU next year. Free trade talks typically take many years to conclude.

In the briefing, Wang again slammed Washington for intransigence and intentionally hyping up the idea that the United States is the real victim in their trade dispute.

“The responsibility for the trade imbalance between China and the United States lies not with China,” Wang said, citing the global role of the U.S. dollar, low U.S. savings rates, huge levels of U.S. consumption and U.S. restrictions on high tech exports as amongst the reasons.

The United States has benefited a great deal from trade with China, getting lots of cheap goods, which is good for U.S. consumers, and U.S. companies benefit hugely in China too, he added.

Both China and the United States had appeared to have avoided a full-scale trade war in May, with China agreeing to buy more U.S. agriculture and energy products, but the deal collapsed and the two sides slapped import tariffs on their respective goods.

Washington has since threatened to set tariffs on an additional $450 billion worth of Chinese goods, and no formal negotiations between the two countries have taken place since early June.

China says it is committed to resolving the dispute via talks, and has appealed to other countries to support it in upholding free trade and the multilateral trading system, though European countries in particular have many of the same market access complaints as the United States.

Wang said the current tensions were initiated by the United States, and the two should resolve their issues under the World Trade Organisation framework, rather than in accordance with U.S. law.

“China does not want to fight a trade war, but in the face of this aggressive attitude from the United States and violation of rights, we cannot but and must take countermeasures,” he said

“China’s door to dialogue and negotiations is always open, but dialogue needs to be based on equality and mutual respect and on rules,” Wang said. “Any unilateral threats and pressure will only have the opposite effect.