Cardinal Pell behind bars in Australia after child sex conviction 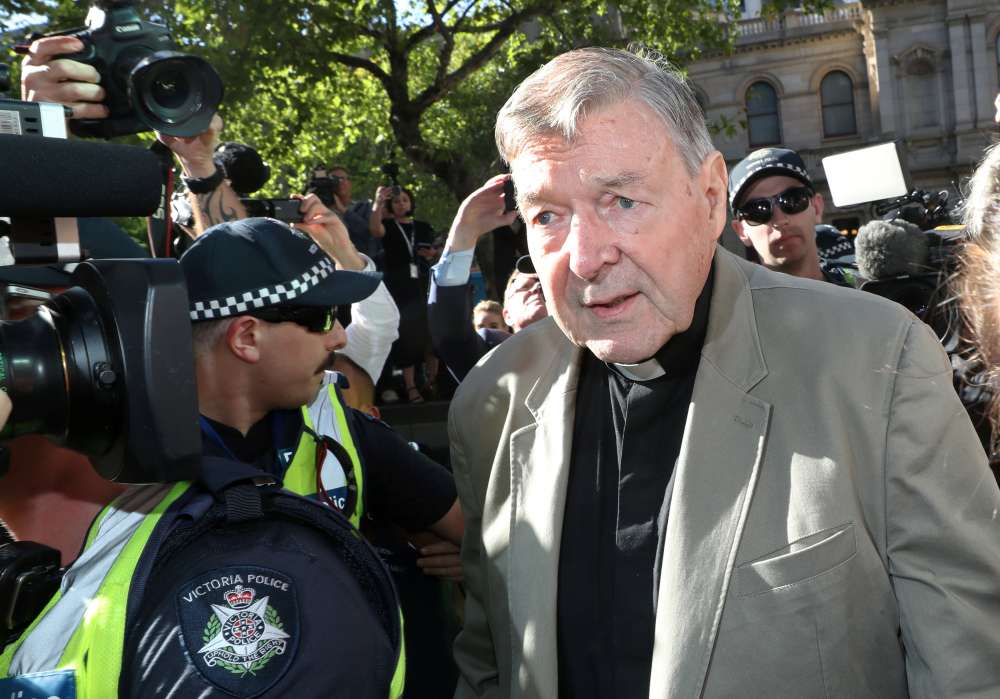 Former Vatican treasurer Cardinal George Pell will spend his first night behind bars on Wednesday after he was remanded into custody pending sentencing for sexually abusing two choir boys in Australia two decades ago.

Pell, a former top adviser to Pope Francis and the most senior Catholic cleric to be convicted for child sex offences, was found guilty in December of five charges related to the abuse of the 13-year-old boys while he was Archbishop of Melbourne in the 1990s.

Pell’s guilty verdict was revealed in Australia on Tuesday after a court suppression order was dropped.

The 77-year-old Pell was back in court on Wednesday for his sentence plea hearing, where his bail was revoked and he was taken into custody ahead of his final sentence being determined.

Pell will be sentenced on March 13.

Each of the five offences of which Pell was found guilty carries a maximum 10 years imprisonment, and the judge outlined they were serious charges.

“This offending warrants immediate imprisonment,” prosecutor Mark Gibson told a packed courtroom, which was crowded to overflowing with journalists, lawyers and members of the public. “It involved two vulnerable boys.”

Two victim impact statements were tendered in the hearing; one from the victim who testified in Pell’s trial and one from the father of the other victim who died in 2014, but they were not made public.

Robert Richter, a lawyer representing Pell, tried to argue that Pell’s offences were at the low-end of the scale, at one point saying it was “no more than a plain vanilla sexual penetration case” where the child did not willingly take part, an argument quickly dismissed by the judge.

During the trial one victim described how Pell had exposed himself to them, fondled their genitals and masturbated and forced one boy to perform a sex act on him.

“I see this as a serious example of this kind of offending,” Kidd told the Melbourne County Court.

“There was an element of brutality to this assault.”

Prime Minister Scott Morrison, who led a national apology in parliament in 2018 to victims of institutional sexual abuse, told reporters his thoughts were with the victims, and he wouldn’t comment on calls to strip Pell of his Order of Australia honour.

“We do have the law in this country and that law requires a process now to be followed, so I don’t intend to engage in that other than to say to all of you out there who have been victims of child sexual abuse, know that we’re thinking of you.”

Pell was heckled as he arrived at court and sat in the dock flanked by police officers. His conviction dominated media for a second day, with banner headlines in Australian newspapers such as “CARDINAL SIN”, “CARDINAL TO CONVICTION” and “GUILTY”.

Pell’s lawyers have appealed his conviction. Pell has maintained his innocence.

His defence team withdrew an application for a bail hearing at a separate court on Wednesday afternoon, aimed at keeping him free until his appeal was heard.

The conviction of such a senior Vatican official has brought the Catholic church’s growing sexual abuse crisis, which has also seen scandals in the United States, Chile and Germany, to the heart of the papal administration.

On Tuesday, Vatican spokesman Alessandro Gisotti told reporters the conviction was “painful” for many but that the cardinal had proclaimed his innocence and had the right to “defend himself until last level” of judicial process.

Gisotti also said Pell’s five-year term as Vatican economy minister had expired on Feb 24, and later tweeted that he was “no longer the Prefect of the Secretariat for the Economy”.

The pope ended a conference on sexual abuse on Sunday, calling for an “all out battle” against a crime that should be “erased from the face of the earth”.

Pell’s future in the Catholic church remains unclear while his appeal plays out.

Former U.S. Cardinal Theodore McCarrick was expelled from the priesthood after he was found guilty of sexual crimes against minors and adults, the Vatican said in February.

The 88-year-old became the first Roman Catholic prelate in nearly 100 years to lose the title of cardinal last July and is the highest profile church figure to be dismissed from the priesthood in modern times.

By In Cyprus
Previous articlePakistan says it shot down Indian jets, carried out airstrikes in Kashmir (video)
Next articleGas revenues not to be used to pay back public debt