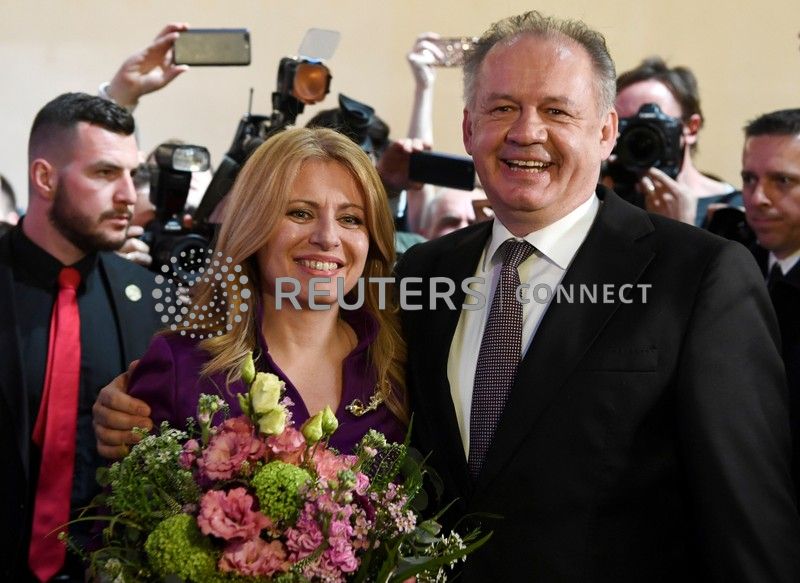 Corruption and change in political style were the main themes ahead of the run-off vote, which took place a year after journalist Jan Kuciak, who investigated high-profile fraud cases, and his fiancée were murdered at their home.

Caputova, a pro-EU political novice who will be the euro zone country’s first female president, had 58.3 percent of the votes after results from 98.1 percent of voting districts were counted, ahead of European commissioner Maros Sefcovic who took 41.7 percent.

Sefcovic, a respected diplomat who is also pro-EU, is backed by the ruling party Smer, the largest grouping in parliament that has dominated Slovak politics since 2006.

Caputova, who was the front runner having won the first round more than 20 percentage points ahead of Sefcovic, campaigned to end what she calls the capture of the state “by people pulling strings from behind”, a message that opinion polls show resonates with younger, educated voters.

The 45-year old member of a liberal non-parliamentary Progressive Slovakia party — which she pledged to leave if elected — has been endorsed by opposition parties and a junior party in the ruling coalition that represents the ethnic Hungarian minority, as well as outgoing President Andrej Kiska.

Caputova started her acceptance speech by thanking voters in Slovak, as well as in the Hungarian, Czech, Roma and Ruthenian languages, turning to all main minority groups.

“I am happy not just for the result but mainly that it is possible not to succumb to populism, to tell the truth, to raise interest without aggressive vocabulary,” she told a crowd of supporters.

“This started in the local election last year, was confirmed in the presidential election, and I believe the European (parliamentary election in May) will confirm it as well.”

Five people have been charged with the murders of Kuciak and his fiancée Martina Kusnirova, including businessman Marian Kocner, who was investigated by Kuciak, and who has become a symbol of perceived impunity after more than a decade of rule by Smer. Kocner denies any wrongdoing.

Caputova had waged a 14-year fight with a company Kocner represented that wanted to build an illegal landfill in her home town. She eventually won the case, earning her the nickname “Slovakia‘s Erin Brockovich”, after the American environmentalist portrayed by Julia Roberts in a 2000 film.

Caputova’s victory complicates Fico’s plan to leave politics by becoming head of the Constitutional Court – a position vetted by the president.

It may give a boost to opposition parties looking to replace Smer, still the most popular party, in next year’s general election.

But political analysts have said a socially liberal president will also mobilise Smer and anti-system voters, a fight already foreshadowed by Fico this week when he called liberals “people without values”.

There was an indication of that this week when Smer teamed up with the centre-right Slovak National party, the far-right People’s Party-Our Slovakia and the populist We Are Family movement to halt ratification of a European treaty designed to combat violence against women.