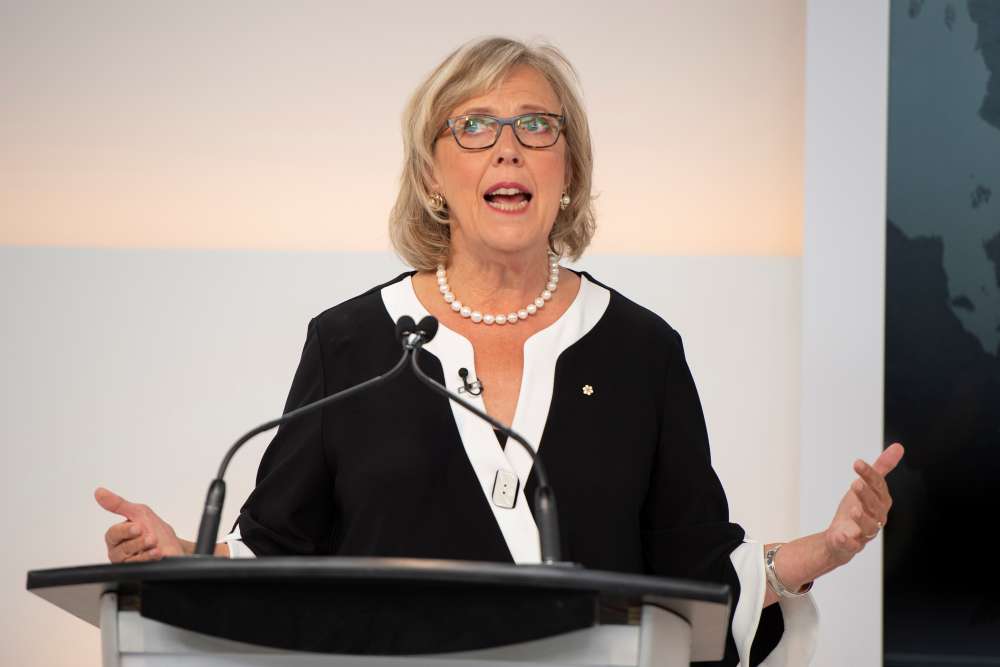 With climate change a top concern heading into next month’s Canadian election and mainstream candidates offering little inspiration, Green Party leader Elizabeth May could be poised for a breakthrough.

The Greens have toiled in obscurity for almost 30 years, but polls suggest the environmentalist party could emerge from the Oct. 21 election holding the balance of power. This could hasten the government’s move toward renewable energy and reduce support for the oil industry, a major exporter and a big employer in Alberta and Saskatchewan.

The Greens are sitting at around 11% public support, more than triple the 3.4% the party received in the 2015 election when May, an effervescent 65-year-old, was the only legislator to win a seat. Public opinion surveys suggest her party might win up to 10 seats in the House of Commons.

“Nothing is impossible in this election,” May told Reuters in a telephone interview. In previous federal elections, the party has started well only to flop as supporters backed other more established parties.

Backing for the Greens has surged after a rash of major floods, tornadoes and forest fires in recent years. Climate change is happening in Canada at twice the global rate, according to a recently released government study. Some surveys say the environment is the top priority among voters.

“People are experiencing the climate emergency not as an environmental issue, but as an immediate security threat. And that changes attitudes,” said May, who represents a constituency in the Pacific province of British Columbia.

Trudeau declined an invitation to the first leaders’ debate on Thursday and was not present, yet May pretended to shake hands with him anyway.

“Good to see you,” she said to an empty podium.

Trudeau has had ups and downs in his four years in power. Recently he has been dogged by an ethics scandal, while his main rival, Conservative Party leader Andrew Scheer, is still little known.

The Greens are nipping at the heels of their closest rivals, the left-wing New Democrats, who are struggling under new leader Jagmeet Singh.

“A lot of this election is about picking the least objectionable but not very appetizing set of alternatives … she’s the one leader who actually remains above the fray,” Graves said.

“She does a good job. She speaks sensibly, she’s a good debater, she’s handled herself well,” he said.

Trudeau and Scheer are running neck-in-neck nationally, but Liberals have an edge in a greater number of Canada’s 338 individual parliamentary ridings.

If Trudeau wins more seats than Scheer but falls short of a majority, as polls suggest could happen, he will need some opposition legislators to agree to help him govern. May’s price for such a deal could prove very high.

“We will not support any party or collection of parties to form a government that has not committed with real intent and clarity to move away from fossil fuels as quickly as possible,” she said.

She wants a ban on future crude oil pipelines and to block the planned expansion of the Trans Mountain Line from Alberta to British Columbia, which the Trudeau government bought for C$4.5 billion ($3.4 billion) last year.

Were the Liberals to need the support of Greens or the New Democrats, it would be “dire” for the oil industry, said Rafi Tahmazian, a portfolio manager specializing in energy investing at Canoe Financial in Calgary.

“The Liberals would be twisting policy much more aggressively to the left to satisfy these other parties,” Tahmazian said.

Canada has the world’s third-largest proven crude reserves and the industry has struggled in recent years due to lack of pipeline capacity. May says she would seek to fill the fossil fuel void by promoting a switch to a clean energy model