Cairo zoo accused of painting donkey to look like zebra 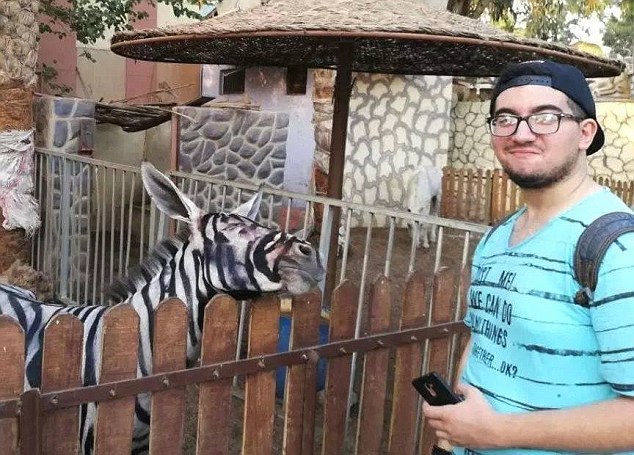 A zoo in Cairo has come under fire for trying to deceive visitors by painting a donkey black and white to make it look like a zebra, the international media has reported.

The creature was spotted by student Mahmoud A.Sarhani who was visiting the recently opened animal sanctuary at the International Garden municipal park.

He shared a picture of the ‘zebra’ on Facebook and it went viral. Commentators noted the long floppy ears which bear more resemblance to that of a donkey’s ears,  a slight tuft of jet black hair on the donkey, rather than the larger shaggier mane a zebra usually has on the nape of its neck and thirdly the smudged appearance of the stripes on the face.

When contacted by local radio station Nogoum FM, Mohamed Sultan, director of  International Gardens Park,  denied it is an imposter.

According to the Daily Mail, this is not the first time a zoo has painted donkeys to resemble zebras.

A zoo is Gaza painted two white donkeys to look like zebras in 2009.

The owner of the zoo justified the paint adorned animals by saying it would have cost large sums of money to smuggle the animals into Gaza due to Israeli restrictions on the importing of live animals.

In another case, a zoo in China annoyed visitors by trying to pass off a hairy dog as a lion in 2013.

When a visited went to the cage of the ‘lion’ at the zoo in Louhe, a city in Henan, they heard a loud bark.

It turns out the ‘lion’ was a hairy Tibetan mastiff, the paper added.

By In Cyprus
Previous articleRegister set up for passport scheme advisors
Next articleUpdated: Cyprus wins case against Vgenopoulos