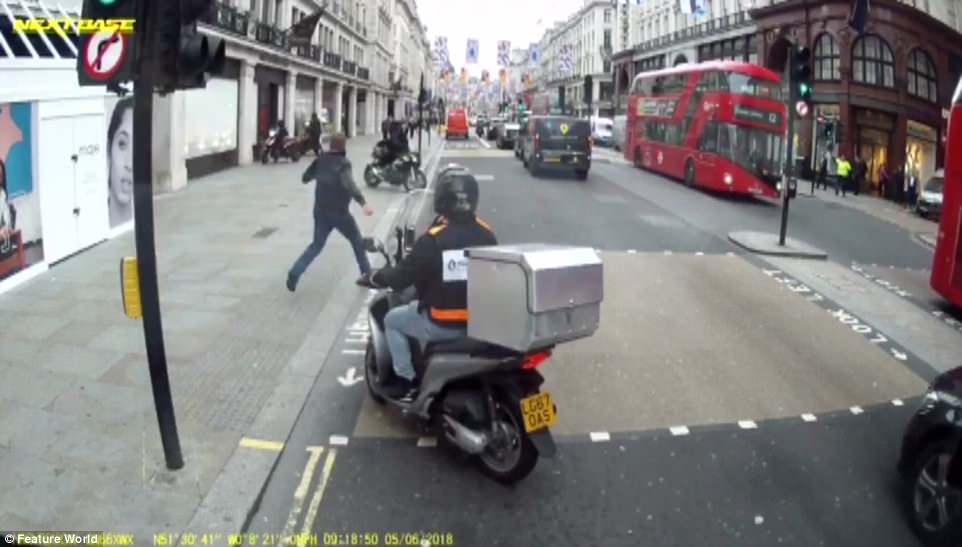 This extraordinary dashcam footage shows the moment Londoners rose up to stop a moped gang armed with giant ‘zombie’ knives and a sledgehammer after they ransacked a luxury jewellers in central London. The four heroic pedestrians are seen running straight at the armed men forcing one of the robbers to abandon his motorbike before they performed a citizens’ arrest on another suspect.

A delivery worker is seen sprinting towards the criminals swinging his trolley before throwing it at them as they race from the Watches of Switzerland store in Regent Street. Three of the thugs ran out of the watch shop and jumped onto mopeds, while another fled on foot.

But the brave bystanders managed to wrestle a fifth raider to the ground, with police later confirming they had arrested him.

The moped gang’s attack – one of 60 in London every day – are believed to have made off with watches worth tens of thousands of pounds. They left a sledgehammer embedded in a Rolex display cabinet.

A red scooter was abandoned inside the doors to the store and a second motorcycle was left in the street. Both are thought to have been stolen. A short distance away a large knife and a glove were left on the pavement. It was the third attack on the firm’s central London stores in just three months.

One witness said: ‘Staff on the doors of shops very swiftly got people in from the street. Some of the public managed to wrestle the guys to the ground.’