Businessman smashes his £115,000 Cayenne into dealership after car is delivered without the optional extras he ordered 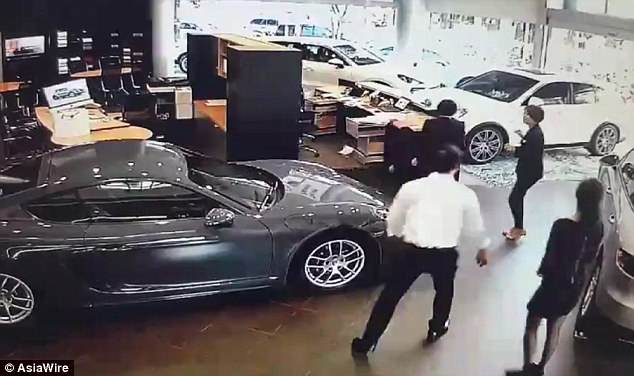 Footage from the Porsche dealership in Taichung City in West Taiwan shows the irate driver, named as Chu, 42, slamming the Cayenne through the front entrance and crashing into the front desk, leaving staff terrified. Chu, who has been described as a ‘loyal Porsche fan’, had ordered a new Panamera Sport Turismo featuring pricey optional 4D Chassis Control from the dealership in January 2017.

The car starts at a price of about £147,000 and would increase to about £184,000 with the extras he wanted. The deal was arranged with the help of his assistant, and Chu paid more than £50,000 in the form of a deposit. But when the Porsche was shipped to the island in November, it did not have any of the optional extras he had ordered. The dealership claimed the sales contract did not include the extras, which were likely forgotten by his assistant.

Chu refused to pay the balance for his new Panamera and demanded his deposit be returned. The dealership stood its ground and threatened to keep his £50,000 deposit should he decide to breach the sales agreement, giving him five days’ notice. The angry businessman then decided to drive his Cayenne through the entrance of the dealership in protest, with footage showing him arguing with the management staff inside. Taichung City police, who arrested Chu minutes later, found a pickaxe and petrol in his Cayenne, but it is unclear what he planned to use the items for.

Chu said in a public statement that he ‘regretted’ his actions – and then claimed he crashed into the business while swerving to avoid a car running a red light. The incident is still under investigation, with the authorities so far revealing the businessman’s prior convictions from 10 years ago, which include burglary and fraud.