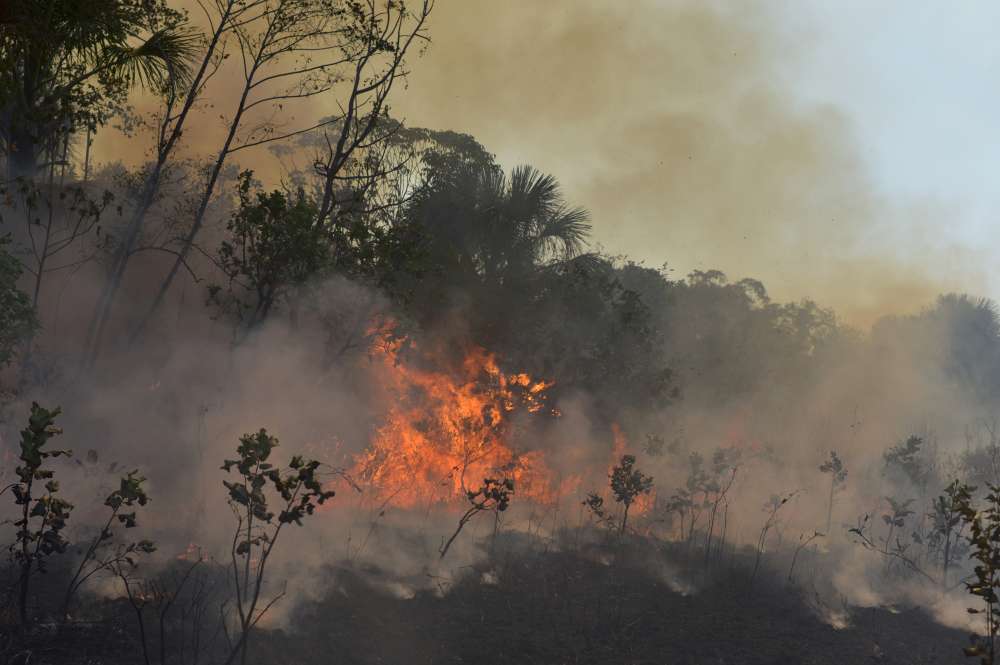 Deforestation in Brazil’s Amazon rainforest rose for the fourth straight month in August from a year earlier, according to preliminary government data released on Friday, adding to concerns over fires already ravaging the region.

The Brazilian Amazon is facing its worst spate of forest fires since 2010, with news of the destruction of the world’s largest rainforest last month prompting global outcry and worries that it could hurt demand for the country’s exports.

Brazil’s leading meat export industry group and other agribusiness associations on Friday joined with nongovernment organizations (NGOs) to call for an end to deforestation on public lands, demanding government action amid the fires.

“I haven’t seen any contracts being canceled in any sectors. Exports continue, but the red light is flashing,” Marcello Brito, president of the Brazilian Agribusiness Association, told reporters at a briefing.

Environmentalists blame the strong rhetoric of right-wing President Jair Bolsonaro in favor of developing the Amazon for emboldening deforesters and those setting fires.

Bolsonaro has complained that the country does not have the resources to police an area as large as the Amazon. The country is facing a steep budget shortfall as its economy recovers slower than expected from a deep recession.

Brazil’s Environment Minister Ricardo Salles told Reuters in an interview on Friday that the government did not have enough funds to hire more permanent environmental enforcement agents, who are used to combat deforestation and fires.

Instead, the federal government plans to hire state environmental police on their days off to assist in enforcement, he said.

“You have to be creative,” Salles said.

The Group of Seven wealthy nations offered $20 million in aid last week to help fight the fires, but Bolsonaro said he would only accept it if French President Emmanuel Macron withdrew “insults” against him.

Bolsonaro and Macron have been embroiled in a deeply personal and public war of words, with Bolsonaro mocking Macron’s wife and accusing the French leader of disrespecting Brazil’s sovereignty. Macron has called Bolsonaro a liar and said Brazilian women are “probably ashamed” of him.

It remains unclear if Brazil will accept the offer, although the country will take 10 million pounds in aid from the United Kingdom, according to the British embassy in Brasilia.

In the eight months through August, Amazon deforestation rose 92% to 6,404.8 square kilometers (2,472.91 square miles), an area larger than the U.S. state of Delaware, according to preliminary data from the National Institute for Space Research (INPE).

Deforestation is often followed by burning to clear land for ranching or farming, so the destruction in August could signal more fires to come in the Amazon, according Ana Paula Aguiar, an INPE land use researcher now on leave at Stockholm University.

“They cut trees and then later they start fires, so possibly (the spike in fires) will continue,” Aguiar said. “If they have already deforested in the previous month, we’ll see fire this month.”

In the first five days of September, INPE registered 2,799 fires in the Amazon, a decrease of 60% compared to the same period of 2018.

If the hotspots continue to be registered at the same rate, September could be a better month for fires, falling below the same month a year ago and the average for the last 20 years, Aguiar said. But with only a few days of data, it is too soon to tell, she said.

Environment Minister Salles attributed the fall in the number of fires to the government’s measures to combat the fires, which included sending in the military.

Rain could bring relief to the western part of the Brazilian Amazon, although to the east broad swathes of the rainforest will remain extremely dry, according to Refinitiv data.

Meat group Abiec and NGOs Imazon and IPAM are among the 11 Brazilian groups that signed on to a campaign on Friday calling for a Justice Ministry task force to resolve conflicts over public land, representatives of the groups told reporters.

The protection of the Amazon, which absorbs vast amounts of greenhouse gas that causes global warming, is seen as vital to the fight against climate change. Roughly 60% of the Amazon lies in Brazil.

The campaign also calls for another task force to examine forests on public land that have not been assigned any reserve or other status.

About 40% of deforestation in 2018 occurred on public lands, according to IPAM.

All forests should receive designations based on what they are best suited for, IPAM Executive Director Andre Guimaraes said. For example, if it contains sensitive species, a forest could be protected as a reserve or national park, he said.

Others could be designated as national forests or as concession areas for sustainable logging, Guimaraes said.

By In Cyprus
Previous article
Education Minister: Ala will return to her school with the support of the head teacher
Next article
Trump administration weighs another cut to refugee cap for 2020