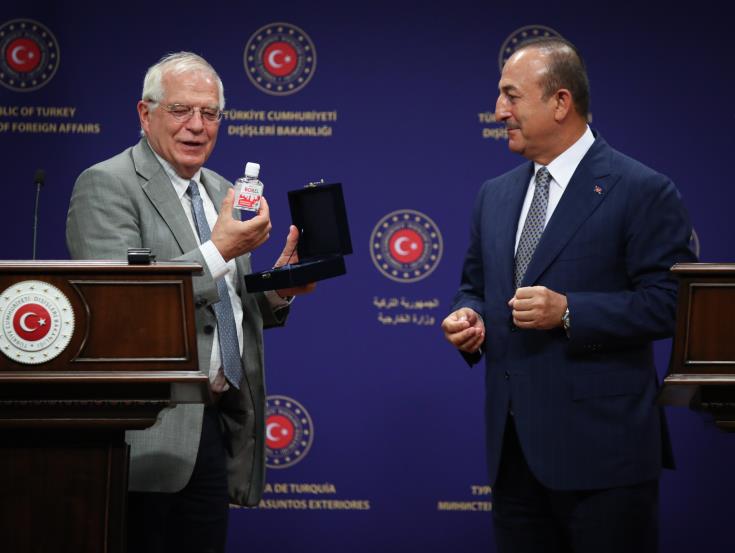 EU High Representative on Foreign Policy Josep Borrell officially informed Turkey’s Foreign Minister Melvut Cavusoglu on the outcome of the informal Foreign Ministers’ Council of Friday in Berlin and the EU’s expectations for de-escalation and productive dialog for permanent solutions in the Eastern Mediterranean.

More specifically, called by CNA to elaborate on the conversation between the HRVP and Cavusoglu, European Commission and EEAS Spokesman Peter Stano stated the following:

“I will try to answer those questions that are for the EU to answer, so I will not be answering on how the Turkish side is assessing the results of the formal ministerial meeting in Berlin.

I can confirm that HRVP Borrell spoke to the Turkish foreign minister Melvut Cavusoglu.

This is part of their ongoing conversations.

You know that in the past they had both phone-calls and personal meetings, and this is the way the HRVP proceeds, in order to maintain the dialog with Turkey.

On this particular occasion, the main reason for the phone-call was to debrief essentially the Turkish partner on the outcome and the discussions of the foreign ministers of the EU on the relations between the EU and Turkey and on the situation in the East Med in line with the messages shared with the public on Friday after the informal FAC meeting.

So the Turkish side was informed both publicly through the messages of the Gymnich, and also privately and personally by the HRVP on the EU’s expectations from Turkey in order to find a peaceful and calm solution to the tensions in the East Med and how the EU sees the road towards de-escalation, and measures which the EU is ready to take and is already taking in order to react to Turkey’s behaviour which is, as the Ministers have clearly stated, a source of concern for the whole EU.”

On the elements to be contained in the dialog between Turkey – Greece, the spokesman answered to CNA that:

“The bottom line is to have the dialog going, instead of unilateral actions which increase the tensions in the area among the neighbours and among the EU and Turkey as such.

The Ministers were very clear that they want to find a path towards a healthier relationship between the EU and Turkey give a serious chance to dialog.

So at this stage I wouldn’t go into speculation on the agenda of the dialog but to the fact that it is essential to stop unilateral actions, and exchanges of messages through the media, declarations and statements, that we are witnessing right now between Turkey and Greece for example, but (instead) it is essential to go into dialog, serious honest dialog, tackling all the open issues, because only in dialog and in negotiations we can pursue the path towards, de-escalation, stability and lasting solutions, that are so necessary in our relations, both as the neighbours of Turkey and as partners of Turkey, and that concerns the individual members states and the EU as a whole.”

By In Cyprus
Previous articleOne new coronavirus case detected out of 1,916 tests
Next articleUpheaval on Wizz air flight due to a passengers refusal to wear a mask