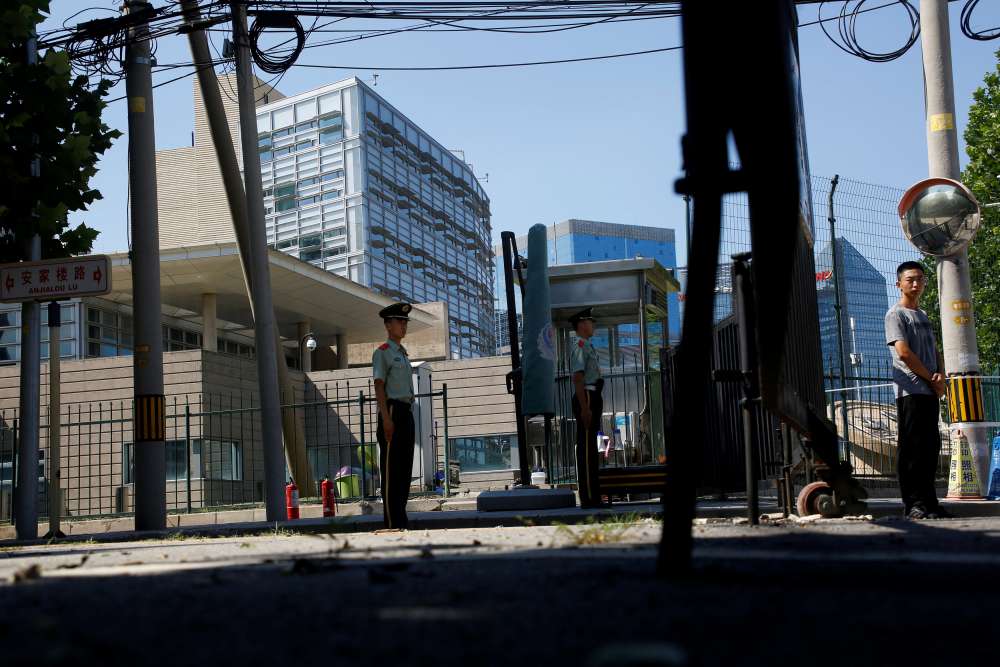 A bomb exploded outside the U.S. embassy in Beijing on Thursday, wounding the lone assailant, the embassy said in a statement, but police described the weapon merely as a “firework device”.

The explosion happened on the street outside southeast corner of the embassy compound, the embassy said. Beijing police said the suspect, a 26-year-old man from China’s Inner Mongolia region, had injured his hand and been taken to hospital.

Police did not provide a motive.

China and the United States have been involved in an escalating trade dispute initiated by Washington after the two sides imposed tariffs on $34 billion worth of each other’s goods, with U.S. President Donald Trump threatening ultimately to impose punitive tariffs on all Chinese imports.

While Chinese officials and state media have been outspoken in their criticism of Washington’s trade moves, there has not been a groundswell of outrage on China’s heavily censored social media, and no reported boycotts of U.S. goods.

Witnesses told Reuters that they heard an explosion near the embassy and felt tremors.

“I’d just arrived and started to queue and then heard a loud explosion about 100 metres away,” a 19-year-old high school student who gave his name as Li told reporters.

Li said the blast happened shortly after 1 p.m. as he queued to apply for a U.S. visa to take an exam in Los Angeles.

A police SUV appeared to have been damaged, with its back windshield missing, and was cordoned off by police before being removed, a Reuters witness said.

The embassy resumed normal operations at about 1.45 p.m., it said.

Crowds were still queueing outside the embassy after the explosion and traffic was moving as normal in an area of northeastern Beijing that is home to numerous embassies including those of France, India and Israel.

Postings on social media showed pictures of smoke close to where people line up outside the compound for visa appointments. Some video clips and images were later removed.

Li Shaohui, a 58-year-old sanitation worker, said he felt the ground shake and that some people screamed.

“I thought first there was big a car crash,” Li told Reuters, adding that the smoke had cleared quickly.

There was no damage to U.S. embassy property, the embassy said.

Staff members at the Indian and South Korean embassies said they were unaware of any unusual incident and were working as normal.

The state-run Global Times reported separately, citing a witness, that Chinese police took away a woman who sprayed herself with gasoline in a suspected self-immolation attempt outside the embassy at around 11 a.m. on Thursday.

Beijing police did not immediately reply to a request for comment.

Security in the Chinese capital is tight and protests are often quickly disbanded. Violent crime rates are low in China, according to official statistics.

By In Cyprus
Previous articleUpdate: Fire near Pachna under control
Next articleNicosia woman fined €10,000 for nine live hares