BA plane lands in Edinburgh instead of Dusseldorf by mistake 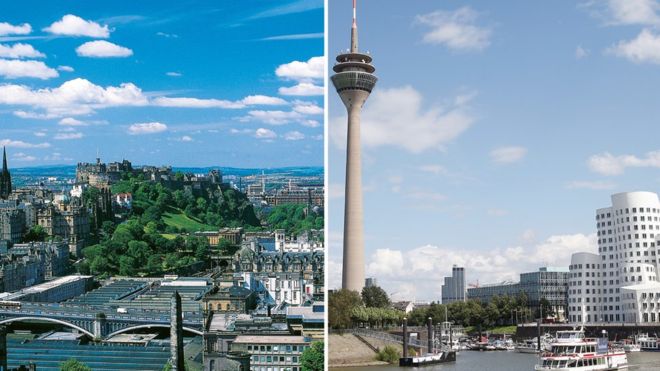 A British Airways flight destined for Dusseldorf in Germany has landed in Edinburgh by mistake, after the flight paperwork was submitted incorrectly.

The passengers only realised the error when the plane landed and the “welcome to Edinburgh” announcement was made.

The flight has now been redirected and landed in Dusseldorf, BA says. German firm WDL Aviation ran the flight for BA as part of a leasing deal.

BA said it was working with WDL to find out why it filed the wrong flight plan.

“We have apologised to customers for this interruption to their journey and will be contacting them all individually,” BA said in a statement.

It is not yet known how many passengers were affected by the mistake.

BA say the pilot wasn’t lost at any point, but because the paperwork said Edinburgh, air traffic control allowed the flight to take that route.

The plane took off from London City Airport.

Passengers complained about the error on Twitter, with one person called Son Tran saying it felt “like an honest mistake”.

This feels like an honest mistake rather than a diversion. The crew was convinced of the Edinburgh flight path from the get-go…

Another passenger suggested that boarding passes had not been checked before they got on the plane.

@British_Airways can you please explain how can my morning flight taking off from LCY to Dusseldorf land in Edinburgh 😅? While an interesting concept, I don't think anyone on board has signed up for this mystery travel lottery… #BA3271 #frequenttravel #britishairways