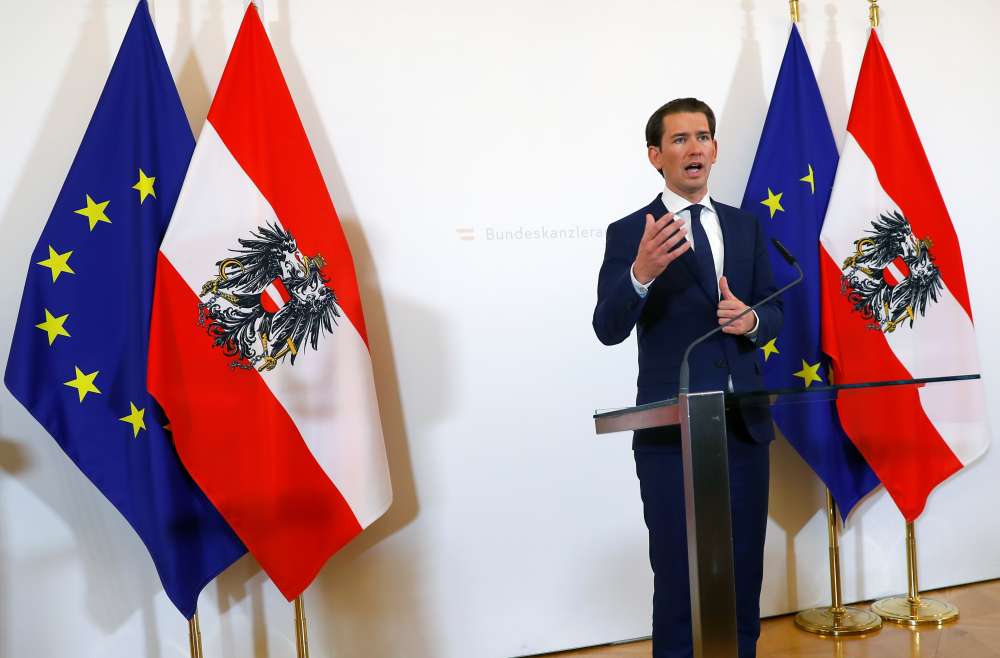 Austrian conservative Chancellor Sebastian Kurz suffered the biggest setback of his meteoric career on Monday as parliament voted the 32-year-old’s government out of office in the wake of a video sting that blew up his coalition with the far right.

The star among Europe’s conservatives, known for his hard line on immigration, looked unassailable just two weeks ago.

But then the leader of the far-right Freedom Party (FPO) was caught in a video sting, prompting him to step down and leading Kurz to call off their alliance.

Kurz became the head of a caretaker government just days ago and hoped to use that position as a springboard to re-election, depicting himself as more of a victim of the current crisis than its enabler who brought the FPO into power. But the centre-left opposition said he shared the blame, and the FPO backed it.

“Kurz gambled away his chances and, Mr Chancellor, you bear full responsibility,” the Social Democrats’ (SPO) deputy parliamentary faction head Joerg Leichtfried said in a speech to lawmakers, minutes before his party submitted a motion of no-confidence against Kurz’s government.

The first successful no-confidence motion against an Austrian government since the country regained its independence in 1955 was passed when lawmakers from the Social Democrats and FPO stood in support. Together they control a majority of seats in the assembly. Kurz’s party holds a third of the seats.

Austrian President Alexander Van der Bellen must now nominate a new chancellor to put together a caretaker government able to last until the next election, widely expected to be held in September. While he could in principle choose Kurz again, that is highly unlikely. An elder statesman, like a retired president or senior judge, is the more probable.

Van der Bellen said he would formally relieve the government of its duties at 11:30 a.m. (0930 GMT) on Tuesday but ask ministers to stay on for “a small number of days” until a solution for a new provisional government were found. Vice Chancellor Hartwig Loeger would lead until then, he said.

Kurz had replaced outgoing FPO ministers with civil servants, arguing that even though he headed what was essentially a minority government, it represented stability in the wake of the video scandal and ahead of a parliamentary election widely expected to be held in September.

He also pledged a full investigation into any crimes and wrongdoing arising from the footage in which FPO veteran Heinz-Christian Strache appeared to offer to fix government contracts for a woman posing as a Russian oligarch’s niece.

Strache says he did nothing illegal. Vienna prosecutors say they are investigating “in multiple directions” in relation to the footage although they have declined to elaborate.

Instead of seriously seeking to build bridges with the Social Democrats and other opposition parties, however, Kurz sought to strengthen his hand with a strong showing in Sunday’s European election, and he succeeded.

Rather than punish his People’s Party for its 17-month alliance with the far right, voters rewarded it with a bigger share of the vote than in the 2017 election that brought Kurz to power. The Social Democrats (SPO), the biggest opposition party, were unable to capitalise on the video scandal and lost ground.

“To topple the entire government a few months before an election is something no one in this country can understand,” Kurz told lawmakers the day after what he called his party’s “landslide” victory in the European Parliament vote.

But that did not deter the SPO from bringing its motion of no confidence against Kurz. It argued that if any ministers were going to be replaced with civil servants to rebuild trust after the scandal it should be all ministers including Kurz.

“Your actions have nothing to do with responsibility,” SPO leader Pamela Rendi-Wagner told lawmakers.

Kurz had prepared his arguments ahead of the vote, saying he would once again seek a show of strength at the ballot box.

“Parliament decided today but at the end of the day, in September, in a democracy the people decide,” he told a party rally in Vienna after the vote. “I am looking forward to that.”

The FPO’s Herbert Kickl, whom Kurz forced out of his post as interior minister, forecast a different outcome. “This power grab is disgusting… And voters will decide about that, too, in September,” he told lawmakers.

By In Cyprus
Previous articleMicrosoft, Facebook to help tame internet ahead of Canada’s election, official says
Next articleFather storms into principal’s office with toy gun