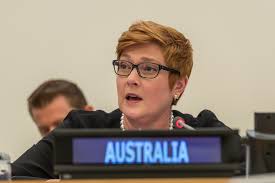 A spokesperson for Morrison on Tuesday said the prime minister had agreed to help, drawing criticism from Australia’s opposition Labour party.

But Payne said cooperating with Australia’s closest ally was prudent.

“We are working in Australia’s interests and we are working with our closest and most important ally,” Payne told the Australian Broadcasting Corp.

“We should assist them as we can, we should ensure that assistance is appropriate and that’s what we’re doing.”

Trump is under mounting pressure amid an impeachment investigation by the U.S. House of Representatives into reports that he sought to influence foreign governments to go after his political adversaries.

The Democratic-led House began the inquiry last week after a whistleblower raised concerns that Trump tried to leverage nearly $400 million in proposed aid for Ukraine in exchange for an investigation of former U.S. Vice President Joe Biden.

Biden is seeking the Democratic nomination to run against Trump in the 2020 election.

Downer was allegedly told in 2016 by George Papadopoulos, a Trump campaign aide, that Russia had damaging information about Hillary Clinton.

Downer reported the details of the conversation, which Papadopoulos denies, to the U.S. Federal Bureau of Investigation.

By In Cyprus
Previous article
Mainly fine, increased cloud cover at intervals in the afternoon
Next article
Johnson proposes to leave N.Ireland in special relationship with EU until 2025-Telegraph