As new Syrian exodus unfolds, some fear they will never go home (pics) 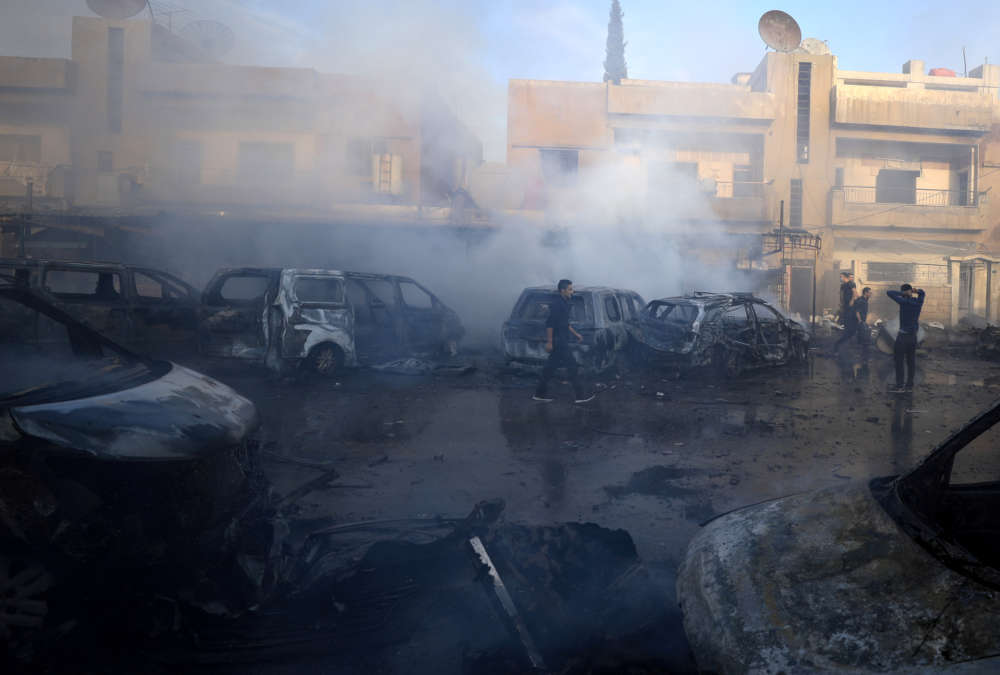 Kurdish doctor Farid Mustafa was one of the last to flee Ras al-Ain as Turkish bombs rained down on the Syrian border town. He fears he may never return home.

He escaped on Thursday night with his wife and two small children as warplanes flew in the sky above a line of cars trying to get away from the border. A few people stayed behind to defend their homes.

“We were scared of the plane, not anything else,” he told Reuters. “Also my kids, I swear we’re not even worried about ourselves, but the kids. They were crying.”

Some 100,000 people have fled their homes since Turkey mounted its offensive in northeast Syria on Wednesday, moving away from the border and deeper into the region – which the Kurdish YPG militia and its allies control.

The exodus is the latest in Syria’s war that has already uprooted more than half of the population – some 11 million people – through years of multi-sided warfare which shattered the country.

Mustafa, with some 30 family members, is now staying at a relative’s house in the city of Hasaka, where many residents have opened up their homes.

He fears his Kurdish ethnicity would make him a target if his town of Ras al-Ain falls to Turkish forces and their Syrian rebel allies, enemies of the YPG.

“I’m not worried about my house, let it be destroyed,” he said. “But what if my town is gone, what will I do?” he said.

Ankara brands the YPG a security threat because of links to the Kurdish PKK which has waged a long insurgency inside Turkey.

Turkey’s offensive, its third into northern Syria, kicked off after a withdrawal from part of the border of U.S. forces, whose presence had until then deterred such an attack.

The Syrian Democratic Forces (SDF), which the YPG spearheads, decried the U.S. move as betrayal after they fought alongside each other to crush Islamic State across much of Syria.

Still, U.S. forces have not all gone. Dozens of Syrians fled towards one of the U.S. bases outside the mainly Kurdish town of Kobani after it was shelled, some taking their cattle with them, a witness and a local official said.

Kobani was the birthplace of the U.S.-YPG military alliance some five years ago, when Washington intervened with air strikes to help Kurdish fighters turn the tide against Islamic State.

Kurdish leaders see their region as a relatively stable part of Syria that has enjoyed autonomy for years, shielded from Turkey and the Damascus government by the presence of U.S. forces.

Having lost fighters in the war against Islamic State and played a critical role in helping to defeat the jihadists, long-persecuted Syrian Kurds had hoped to shore up their autonomy within a reformed Syrian state.

That now looks in jeopardy. The Turkish offensive deals yet another blow to an ethnic group left stateless when the Ottoman Empire collapsed a century ago and the Kurds were scattered between Syria, Iraq, Iran and Turkey.

Turkish President Tayyip Erdogan says he wants to settle up to two million Syrian refugees, many of them of them Sunni Arabs, into the region targeted in the operation dubbed “Peace Spring”.

SLEEPING IN THE STREETS

The road to Hasaka was choked by traffic earlier this week as people fled Ras al-Ain.

The city is now crammed with people, and authorities do not have enough water tankers, food, or shelter for the influx, said Khaled Ibrahim, a Kurdish official who oversees aid efforts in the northeast.

“I saw people who could not make it to Hasaka sleeping in the streets, on the pavement, in the public gardens,” Ibrahim said.

The ethnically mixed northeast region is home to some 1.5-2 million people, many of them uprooted from other parts of Syria.

Semira Haj Ali, the head of the education board in the region, said teaching had stopped so that schools could provide shelter.

“We opened schools in Hasaka, and even wedding halls, anywhere there’s room, to shelter the displaced families. We are expecting more to come.”

Most of the people fleeing so far have come from the border towns of Tel Abyad and Ras al-Ain, the current focal point of the Turkish assault.

But people have been on the move elsewhere too.

Hemrin Mahmoud and her sister, both pregnant, fled their homes right on the border in Qamishli to safer parts of the city, along with their six children.

“Naturally, our husbands stayed in their homes to take up arms. What else are we going to do?”

“There was the sound of bullets, my children were afraid, crying, I got them out of the house,” said Mahmoud, 35.

They are sheltering at the home of another sister.

Walid Mamo, their brother-in-law, said he had stocked up on supplies. “I bought 3,000 lira worth of bread today – 100 loaves. I’ve put them in the freezer,” he said.