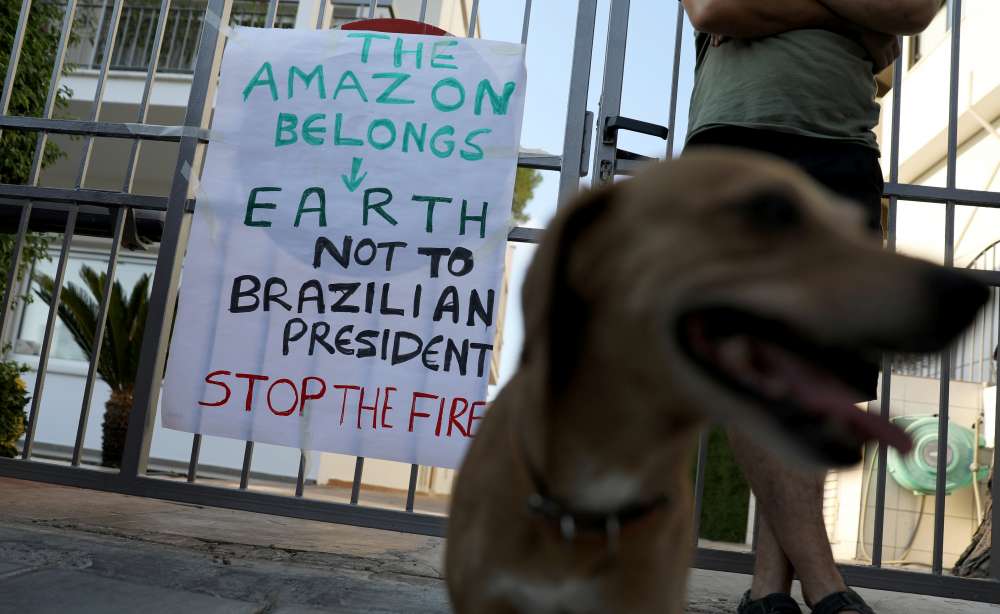 European leaders on Friday threatened to tear up a trade deal with South America, reflecting growing international anger at Brazil as a record number of fires in the Amazon rainforest intensified an unfolding environmental crisis.

Amid a global chorus of concern and condemnation, Brazil’s right-wing President Jair Bolsonaro pledged in an address to the nation to mobilize the army to help combat the blazes, while his administration launched a diplomatic charm offensive to try to mend bridges overseas.

Forest fires in the Brazilian Amazon, which accounts for more than half of the world’s largest rainforest, have surged in number by 83% this year, according to government data, destroying vast swathes of a vital bulwark against global climate change.

French President Emmanuel Macron called for G7 leaders to discuss the environmental crisis in Brazil at a summit this weekend in the French coastal resort of Biarritz. Both France and Ireland threatened to oppose an EU trade deal struck in June with a regional South American bloc following Brazil’s response.

Images of fires raging in the Amazon broadcast around the globe sparked protests outside Brazilian embassies from Mexico City and Lima to London and Paris.

In the Cypriot capital Nicosia, a sign tied to the railings of Brazil’s diplomatic mission read: “The Amazon belongs to Earth not to the Brazilian president.”

Bolsonaro, who initially accused non-governmental organizations of setting the forest on fire without providing any evidence, said in a televised address he had authorized the use of troops to fight the fires and stop illegal deforestation in the Amazon.

But the former military officer attributed the scale of the fires to dryer-than-average weather and insisted on the need for economic development of the Amazon to improve the lives of its 20 million inhabitants.

Environmentalists have warned that his controversial plans for more agriculture and mining in the region will speed up deforestation.

“We have to give the population the opportunity to develop and my government is working for that, with zero tolerance for crime – and that is no different for the environment,” Bolsonaro said in his televised speech.

Polls show Brazilians overwhelmingly oppose his policy on the environment and as he spoke to the nation, residents in large cities across Brazil banged on pots and pans in a traditional Latin American form of protest.

U.S. President Donald Trump – whose skeptical views on climate change Bolsonaro shares – called the Brazilian president to offer help, if needed, in dealing with the wildfires.

“I told him if the United States can help with the Amazon rainforest fires, we stand ready to assist!” Trump said in a post on Twitter.

The wildfires now look set to be discussed at the summit of G7 leaders in France this weekend, where Macron has called for leaders to sign a charter to protect biodiversity. The French leader said an “ecocide” was taking place in the Amazon that required an international response.

British Prime Minister Boris Johnson tweeted that the fires were “not only heartbreaking, they are an international crisis,” while a spokeswoman said Johnson would use the summit to call for a renewed focus on protecting nature.

France and Ireland said on Friday they would now oppose the E.U.-Mercosur farming deal struck in June between the European Union and the Mercosur countries of Brazil, Argentina, Uruguay and Paraguay.

The French president’s office accused Bolsonaro of lying when he downplayed concerns over climate change at the G20 summit in June.

“There is no way that Ireland will vote for the EU-Mercosur Free Trade Agreement if Brazil does not honor its environmental commitments,” Ireland’s Prime Minister Leo Varadkar said in a statement.

The EU-Mercosur deal took 20 years to negotiate, but will not be officially ratified for at least another two years.

Brazilian business leaders also warned the backlash over Brazil’s environmental record could sink its efforts to join the Organization for Economic Co-operation and Development (OECD), a Paris-based club of 37 developed nations whose imprimatur is required by many institutional investors.

Stung by the international outcry, Brazil distributed a 12-page circular, exclusively seen by Reuters, to foreign embassies, outlining data and statistics defending the government’s reputation on the environment.

Having first dismissed the fires as natural, then blaming non-governmental organizations without evidence for lighting them, Bolsonaro appeared to adopt a more serious approach on Friday following the international outcry, summoning top cabinet members for an afternoon meeting to tailor a response.

Agriculture Minister Tereza Cristina Dias insisted that Brazil was “taking care” of the Amazon, and that international concerns over the fires needed to cool down.

“The news is worrying, but I think we have to lower the temperature. The Amazon is important, Brazil knows that, and Brazil is taking care of the Amazon,” she told reporters.

‘INTERFERING WITH OUR SOVEREIGNTY’

The Brazilian space agency INPE has registered 72,843 fires this year, the highest number since records began in 2013. More than 9,500 have been spotted by satellites over the past week.

Although fires are a regular and natural occurrence during the dry season at this time of year, environmentalists blamed the jump on farmers clearing land for pasture.

Farmers may have had at least tacit encouragement from the firebrand right-wing president, who took power in January.

Bolsonaro has repeatedly said he believes Brazil should open up the Amazon to business interests, allowing mining, agricultural and logging companies to exploit its natural resources.

On Thursday, Bolsonaro admitted for the first time that farmers may be behind some of the fires but he responded angrily to what he saw as foreign interference.

Some foreign donors – including the biggest, Norway – have slashed their funding to an Amazon Fund designed to curb deforestation in the region in protest at changes introduced by Brazil that blocked its operations.

“These countries that send money here, they don’t send it out of charity … They send it with the aim of interfering with our sovereignty,” Bolsonaro said.

Alexandre Antonelli, director of science at Britain’s Kew Royal Botanic Gardens, urged that import sanctions be imposed on Brazil because of the fires.

“Immediate action is necessary to extinguish the current fires and prevent future ones,” the Brazilian scientist said.

By In Cyprus
Previous articleTrump says he wouldn’t stop Fed Chair Powell if he offered to resign
Next articleUpdated: Two pedestrians hit by car in Avdilero, driver arrested