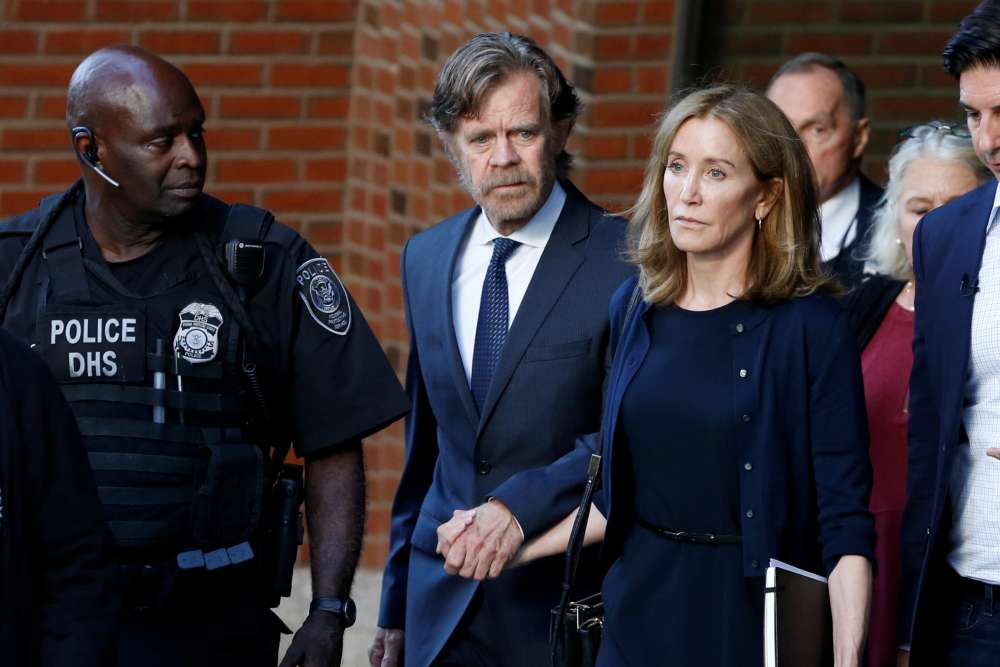 Actress Felicity Huffman, the first parent sentenced in a wide-ranging U.S. college admissions cheating scandal, was given a 14-day prison term on Friday and made a somber apology in federal court for paying to rig her daughter’s entrance exam.

“My first apology is to you,” Huffman, wearing a black dress, told the judge immediately before being sentenced.

“I realize now as a mother that love and truth must go hand in hand, and love at the expense of truth is not real love,” the actress said. “I will deserve whatever punishment you give me.”

Huffman was released from court after the judge ordered her to report to prison on Oct. 25. Her husband, actor William H. Macy, who had been seated in the courtroom and is not charged in the scheme, immediately approached her after court adjourned and rubbed her shoulders.

The scandal cast a spotlight on the advantages of wealth in college admissions and the lengths to which some rich Americans have gone to get their children into top universities at the expense of other applicants.

Huffman was among 51 people charged in a vast scheme in which wealthy parents were accused of conspiring to use bribery and other forms of fraud to secure for their children admission to prominent U.S. universities. These schools included Yale, Stanford, Georgetown, the University of Southern California, the University of Texas and Wake Forest.

After the sentencing hearing, Huffman issued a statement expanding on her apology.

“I especially want to apologize to the students who work hard every day to get into college, and to their parents who make tremendous sacrifices supporting their children,” Huffman said in the statement.

“My hope now is that my family, my friends and my community will forgive me for my actions,” Huffman added.

Prosecutors had recommended a sentence of one month behind bars after Huffman tearfully entered a guilty plea to conspiracy related to her payment of $15,000 to have someone secretly correct answers her daughter Sophia provided on the SAT standardized test used for college admissions.

Assistant U.S. Attorney Eric Rosen said incarceration was the only way to punish a wealthy person like Huffman whose real currency is fame.

“In prison there are no paparazzi. It’s the great leveler,” Rosen said.

Huffman’s lawyer, Martin Murphy, said the actress and particularly her daughter Sophia had suffered enough and urged the judge to limit the punishment to probation. In the days after Huffman’s arrest, her daughter’s top choice college rescinded its acceptance of her.

“There are consequences. Her daughter is not going to school. Consequences are likely to continue,” Murphy told the judge.

More than 30 parents were charged in the investigation dubbed Operation Varsity Blues, also including actress Lori Loughlin, who starred in the TV series “Full House,” and her designer husband Mossimo Giannulli, as well as a host of corporate executives, financiers and lawyers. Unlike Huffman, Loughlin and Giannulli pleaded not guilty.

Huffman, who won an Emmy award for “Desperate Housewives” and was nominated for an Oscar as best actress for her role in the 2005 film “Transamerica,” said the cheating scheme was proposed by Singer.

Huffman said her daughter was unaware of the scheme until the actress was arrested on March 12.

“I find Motherhood bewildering,” Huffman said in a letter to the judge before sentencing.

“My daughter looked at me and asked with tears streaming down her face, ‘Why didn’t you believe in me? Why didn’t you think I could do it on my own?’ … I have compromised my daughter’s future, the wholeness of my family and my own integrity,” Huffman said in her letter.

Macy, 69, said their daughter “certainly paid the dearest price” when her desired school – which remained unnamed in court documents – rescinded its acceptance of her after Huffman’s arrest.

By In Cyprus
Previous articleFacebook fact-checker finds UK Conservatives ran ads with altered BBC headline
Next article“These positions needed to be told, we often forget what the truth is,” Costa Gavras tells CΝΑ