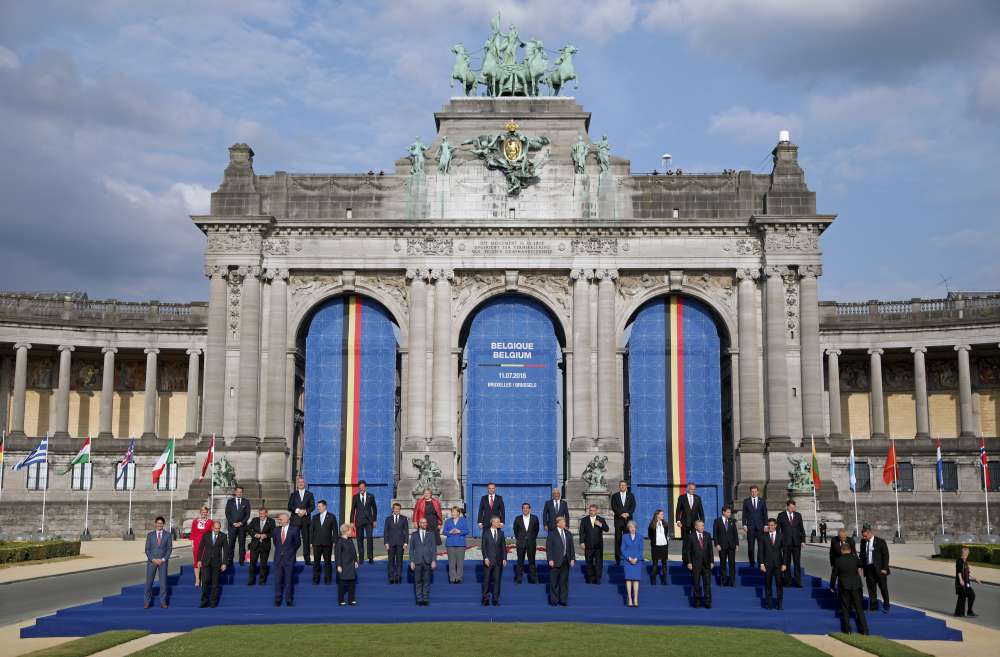 NATO leaders will try on Thursday to move beyond U.S. President Donald Trump’s demands for higher defence spending, and focus on ending the long war in Afghanistan, in the second day of a summit in Brussels underscored by transatlantic tensions.

On a trip that will also take Trump to Britain and to Helsinki to meet Russia’s Vladimir Putin, the president spent the first day of the NATO summit lambasting allies for failing to spend the targeted 2 percent of GDP on defence and accused Germany of being a prisoner to Russian energy.

Trump, in a late-night post on Twitter, wrote: “Billions of additional dollars are being spent by NATO countries since my visit last year, at my request, but it isn’t nearly enough. U.S. spends too much.”

It followed an uncomfortable first round at the summit where anxious Western allies were subjected to the U.S. president’s “America first” approach. His comment that Germany was controlled by Russia earned a rebuke from Berlin.

On day two, leaders will welcome non-NATO partners including Afghan President Ashraf Ghani and Ukraine’s Petro Poroshenko to the alliance’s new glass-and-steel headquarters as they seek to focus on policy rather than politics.

“We will be deploying an additional 440 personnel to NATO’s Resolute Support mission in Afghanistan and I think that shows when NATO calls, the UK is one of the first to step up,” May told reporters.

North Atlantic Treaty Organization chief Jens Stoltenberg wants leaders to agree to fund Afghan security forces until 2024, despite public fatigue in Western countries about their involvement in the conflict.

Funding has averaged at about $1 billion annually and Stoltenberg has said he expected that level to be met.

Leaders will be keen to hear more about Trump’s military approach to Afghanistan, which he revamped last August to include a surge in air strikes to force Taliban militants to the negotiating table.

U.S. officials have told Reuters that Washington is preparing another review of strategy, a year after Trump begrudgingly agreed to extend involvement in the 17-year-old war.

Trump was opposed to remaining in America’s longest war, but his advisers convinced him to give it more time. He authorized the deployment of an additional 3,000 troops, bringing the total to around 15,000.

Trump’s late tweet also repeated his insistence from earlier in the summit that Germany was wrong to support an $11 billion Baltic Sea pipeline to import even more Russian gas while being slow to meet targets for NATO spending. “Pipeline dollars to Russia are not acceptable!” he wrote.

But Trump appeared earlier to substantially overstate German reliance on Russian energy and to imply Berlin was funding a pipeline that Chancellor Angela Merkel says is a commercial venture.

Having chided NATO members for failing to reach a target of spending 2 percent of national income on defence, Trump told fellow leaders on Wednesday he would prefer a goal of 4 percent, similar to U.S. levels, officials said.

That would represent a massive upheaval of budgetary priorities in Europe where Germany and many others have pledged only to reach 2 percent by 2024 or later, and it was not clear what allies would spend the money on.

At the summit on Thursday, leaders will discuss ties with Georgia and Ukraine, two NATO membership hopefuls that contribute to troop levels in Afghanistan but have seen their chances of joining the alliance hampered by Russian incursions into their territory.

Under NATO rules, countries with territorial conflicts cannot join the Western alliance and neither country is expected to progress in membership talks.

FYROMa, however, which was formally invited to start accession talks on Wednesday, will be part of a special ceremony on Thursday as the alliance sets the stage for expanding to its 30th member state

By In Cyprus
Previous articleLimassol casino signs up 5000 members in first 2 weeks
Next articleSetting out vision for future ties, May presses Brexit plans